India, China and US Together Account for Half of Global Smartphone Shipments

Smartphone shipment figures are no more skyrocketing and the growth has settled down. This saturation in the smartphone market was well anticipated since most of the developed markets have already had smartphone users who are just looking out to upgrade and the lengthy upgrade cycle isn’t helping either. According to Counterpoint research, the smartphone shipments has reached a staggering 380 million despite the fact that smartphone growth is stuck in single digits as opposed to the previous years.

Emerging markets have been the saving grace for the smartphone manufacturers as they can easily look out for stronger growth rates in these markets. With the parallel growth in Internet ecosystem and the increase in content consumption, it has been relatively easier for the OEMs to piggyback on the emerging market.

Tarun Pathak, Sr. Analyst at Counterpoint Research said “The era of double-digit growth in the smartphone industry is over as most of the demand in developed markets is being driven by replacement buyers with smartphone upgrade cycles now lengthening. The only growth is now driven by emerging markets in Asia and Africa. For OEMs, performance in China, India, and USA market is becoming a determining factor in charting the global growth story as these three markets now contribute to over half of the total smartphone shipments globally.” In essence, the potential for growth now mostly lies in the emerging markets of Asia and Africa.

Smartphone shipments have reached 380 million units in Q3 2016 and this translates into an annual growth of 5%. Nearly 80% of the phones shipped are smartphones and the top ten brands contribute to 70% of the sales volume. As expected, the growth was driven by the Chinese market who are now also concentrating on the overseas markets. The key brands that sold well with respect to the country are iTel in Africa, Lava in India, LeEco in China, Innjoo in the Middle East and Symphony in Bangladesh. On a related note, the number of LTE-enabled phones shipped in this quarter is pegged at 300 million which is almost a 28% YoY growth.

Samsung is still leading the market with the market share of 20% despite the fact that its smartphone shipments declined by almost 10% YoY. The Note 7 Debacle has definitely taken a toll on the company and has also hit the profitability but the stellar performance by the J Series and the flagship S7 seem to have nullified the negative effects. 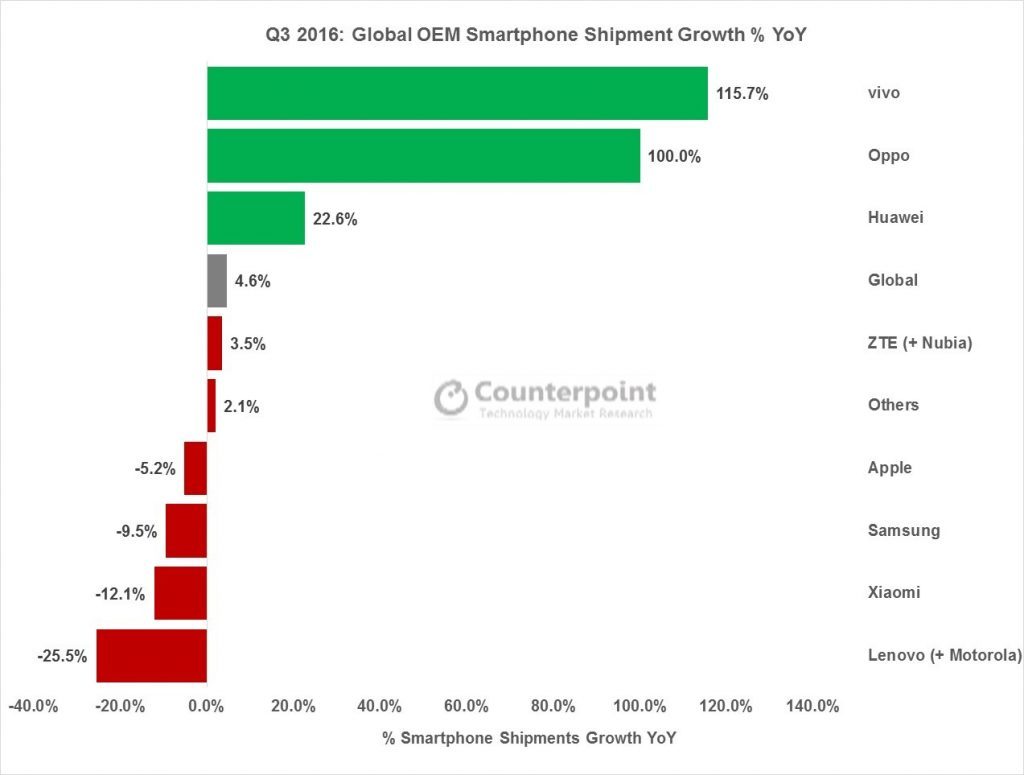 Apple has also witnessed a decline of 5% YoY and this is without taking into account iPhone 7 and the 7 Plus. Usually, Apple’s sales take a dip during the Q3 as most of the buyers line up for the company to unveil its iterative upgrade. Also, the dip in the demand for iPhone 6s further contributes to the low numbers. 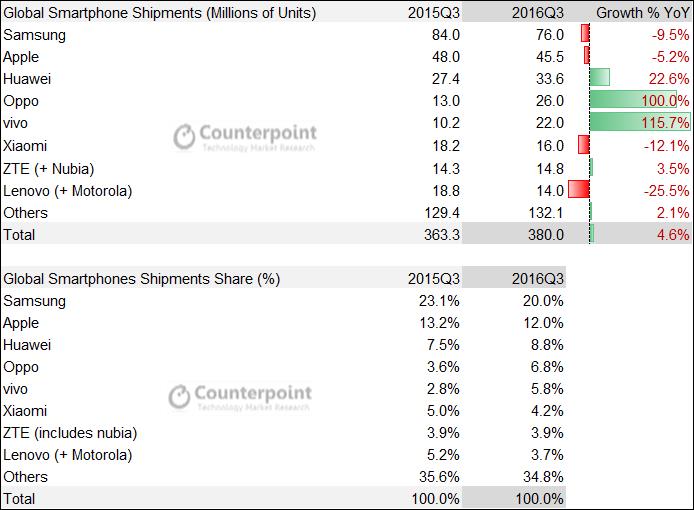 In the meanwhile, Huawei has retained its spot in the top three and has registered a commendable YoY market growth of 23%. The company has been selling strongly in China, LATAM, Middle East Asia and some parts of the Europe. On the other hand, Vivo and Oppo have been leading the market with a record performance in China and have also recorded a healthy growth in its overseas markets including India, Indonesia, and Thailand. It is interesting to know that China and India together contributed to 95% of the smartphone shipment volume for Vivo. Both Vivo and Oppo have been lauded for its wider distribution network and the very fact that it banked on Offline/traditional marketing channels right from the beginning seems to be paying off in the long term. 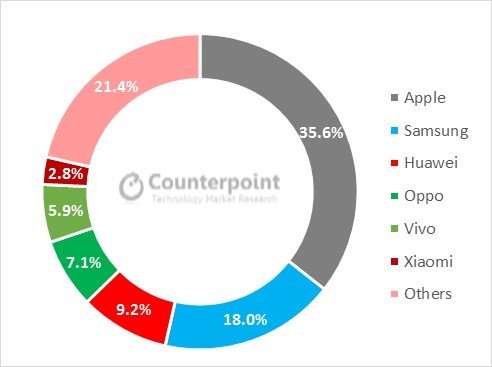 The Global Smartphone Shipment shares have witnessed a decline of 7%. The ASP (Average Selling Price) of the smartphone has been shifting to the lower sides thanks to the low-cost smartphones. Also, emerging markets are mostly high growth and low ASP in nature. Apple has raked in the highest revenue, thanks to the higher ASP and the healthy margins. Samsung and Huawei trail Apple with revenue shares of 18% and 9.2% respectively. Xiaomi is placed sixth in terms of revenue and this is mainly due to the fact that the sales have shifted more towards lower ASP models like the Redmi 3s. In the revenue quarters, Oppo and Vivo have registered a staggering 73% and 90% growth respectively.

[Stat Stories] Smartphone Shipments Hit Record High in India…
Global Smartwatch Shipments Grow in 2020 as Apple, Garmin…
Indian Smartphone Market Almost Cut in Half by Covid
[App Blog] Half a day with Twitter Fleets: Its impact so…
Sennheiser CX 7.00 BT: Sennheiser sound for half the price…
Love bass? The Skullcandy Crusher ANC are available at HALF…