WhatsApp has been ushering in new features regularly through its beta program and now it seems that the most popular messaging app will get a bunch of new social networking features including publishing status updates. This feature is bundled with the WhatsApp beta for Android 2.16.336 and as of now can only be accessed through a rooted phone with the Xposed module installed. 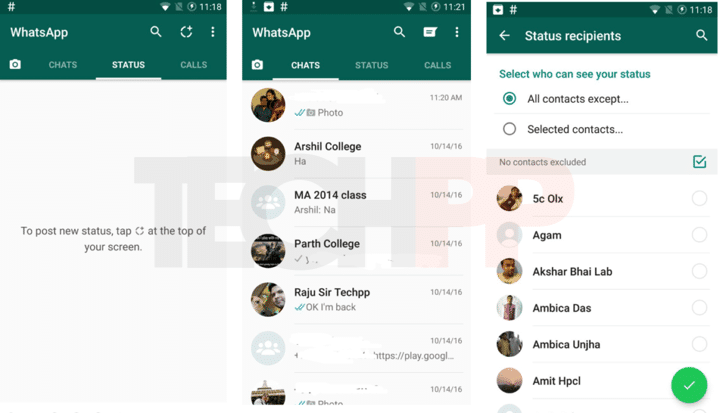 To begin with, WhatsApp has now baked in a newly revamped status tab which lets users see updates from their friends. Users can post images, videos, and texts like any other social website out there. The dedicated section functions as a timeline containing recent statuses from your contacts list. Additionally, there’s a little camera section on the left which directly allows you to publish and of course, you can doodle on images which were recently added on WhatsApp. The status view’s interface has been completely inherited from Instagram Stories with a little time bar on top, full-screen media, and the caption on the bottom. Furthermore, you can individually select which contacts are allowed to view your story. You can, just like messages, also view the read/delivered receipts.

The status view’s interface has been completely inherited from Instagram Stories (*cough* Snapchat Stories *cough*) with a little time bar on top, full-screen media, and the caption on the bottom. Furthermore, you can individually select which contacts are allowed to view your story. You can, just like messages, also view the read/delivered receipts. Moreover, the main menu is now devoid of the contacts tab and the update has even replaced the contacts icon with a new small ring with a plus sign (yes, exactly like Instagram). 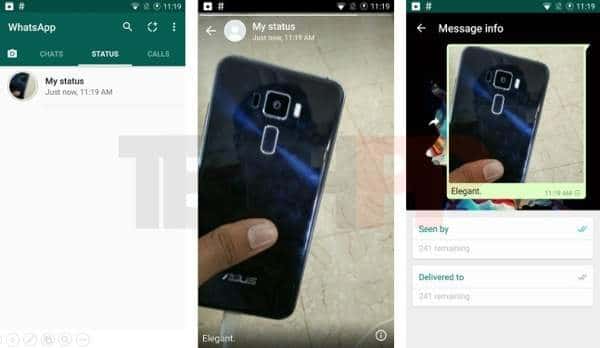 As of now, the features are in hidden mode and most likely, they will appear in an imminent update for everyone. WhatsApp has been picking up cues from other messaging apps, for instance, it introduced Encryption, a feature that was one of the USP for Telegram and now the Instagram-inspired stories which itself was inspired by what Snapchat has been offering for years.

The new status timeline will further push WhatsApp in the social network territory which does create a conundrum for Facebook. On one hand, they’re annexing Messenger with a powerful chat bots platform and they, not long ago, included a home screen for the same. On the other, they’re constantly improving Instagram to compete with applications like Snapchat and at the end, we’ve Facebook. It seems like the social giant is kind of lost while trying to achieve everything. Lastly, there’s WhatsApp which has been gradually attempting to become the ultimate social platform as they recently also brought video calling and given their Billion user reach, I won’t be surprised if these changes hurt Snapchat real bad. Facebook will either have to converge these applications together or push back one or two. It will be fascinating to see how people respond to the new WhatsApp update if they actually make it available to the public. Let us know what you think of these features in the comments section below.

If you do belong to the minuscule percentage of Android users who’ve Xposed framework installed, here’s the module file you need to download and enable. Do note that this feature is originally hidden by WhatsApp, hence, we won’t be responsible if anything goes wrong.

TechPP is supported by our audience. We may earn affiliate commissions from buying links on this site.
Read Next
WhatsApp ‘Call Link’: How to Create, Share and Join Call Links
#WhatsApp #WhatsApp Beta #WhatsApp Status