It seems like it’s the year 2000 all over again, Apple has patented a flip-phone that needs to be flipped to open. The phone will be an advanced clamshell and will come with a flexible OLED screen on the front that folds in the middle and is held together by a hinge mechanism. In essence, the entire smartphone can be folded into half and tucked in your pockets. 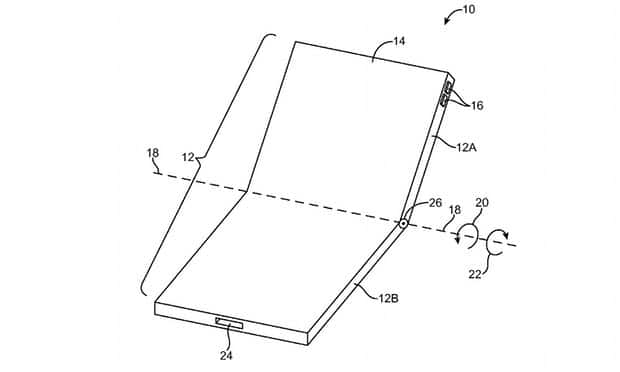 It’s a well-known fact that not all patents materialize into products but the companies nevertheless keep building a strong Patent portfolio. Apple was in the news recently for patenting something as silly as a paper bag. Also, patents like this will further strengthen the diversification needs of the company. That said, Apple has never used a curved screen or a flexible screen on any of its products and maybe this patent signals a new technology in the pipeline.

The main advantage OLED displays has is that it emits its own light and thus ends up having darker blacks and colors that are more vibrant, also, the power consumption by an OLED is less than the conventional display units. Apple has already used OLED display in its Apple Watch and it is rumored that Apple will include the same for iPhone’s as well in the upcoming iterative upgrade cycle. The patent has been applied in 2014, much before the debut of Apple Watch and we have already seen glimpses of same in events like CES. As of now, we have had a couple of curved smartphones, TV’s but bendable OLED display is something we are yet to witness on a commercial scale. Samsung and LG have already showcased their bendable displays. The display described in the patent shows how the screen can be bent to the limits and is also shatterproof and light. For the sake of context below is a video that shows bendable screen.

Was this article helpful?
YesNo
Source: The Guardian

TechPP is supported by our audience. We may earn affiliate commissions from buying links on this site.
Read Next
Apple Close to Something Greater than the Mac, iPod or iPhone
#apple #OLED