Travelmate is an autonomous suitcase that begs to differ from usual suitcases and promises to be more than just a suitcase. In fact a couple of months ago we had seen a similar autonomous suitcase called Cowabot but by the looks of it seems that Travelmate offers more features than the Cowabot. Travelmate not only moves with ease in either horizontal or vertical position but it also lugs other luggage put on top in horizontal mode. Needless to say, the suitcase comes with an array of sensors and mapping technology that helps it move about in large crowds. 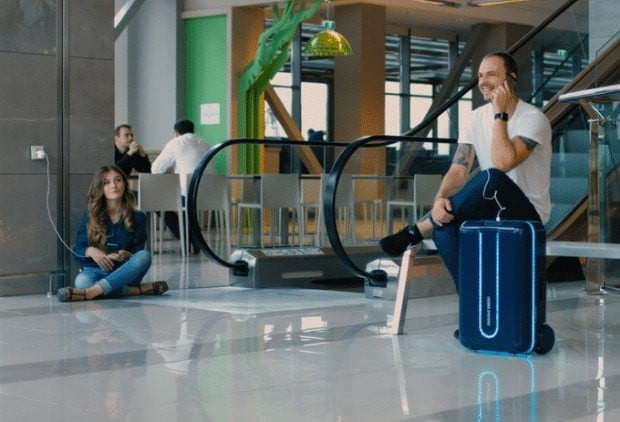 The Travelmate is live on Indiegogo and comes in three different sizes. The product showcased for the demo in apparently a fully working prototype and the company requires funds to scale up the operations and start productions. Travelmate follows you wherever you go this means that you can walk hands-free without having to lug the suitcase around. Travelmate tracks your position with the help of the companion app. It moves along at speeds of up to 10.86 km/h and can also manage rough and uneven terrain. 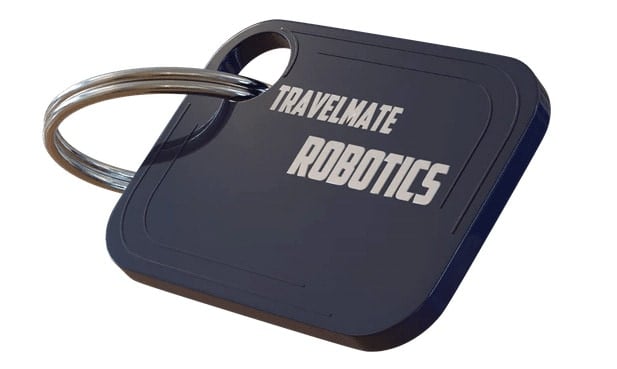 Travelmate comes equipped with a GPS chip with which you can track the suitcase and also one can remove the chip and place it in other suitcases or any other important baggage. The makers of the suitcase also toss in a couple of GPS chips, you know just in case you want to be in control of your belongings.

Remember how we fiddle around with scales to make sure that our baggage doesn’t exceed the weight limit. Well, that is passe as the Travelmate comes with a built-in scale that measures the weight on the real-time basis and you can also switch between Kilograms or Pounds through the Travelmate application.

This suitcase evolves with continuous usage and since it is equipped with Machine Learning capability the bag only becomes clever with usage. Furthermore, the Travelmate will also improve by taking a look at the data from other suitcases, something that Tesla has already been doing for its cars.

Yet another stupendous use case is that of Security Guard, Yes you can simply attach a camera to the Travelmate and leave it to patrol the home in your absence. Also, if you are into Live video broadcasting or a Vlogger, the Suitcase can shape up as your very own cameraman that video graphs you on the fly. Since the suitcase is open source there are good chances of further software improvements and community-based improvements as well. 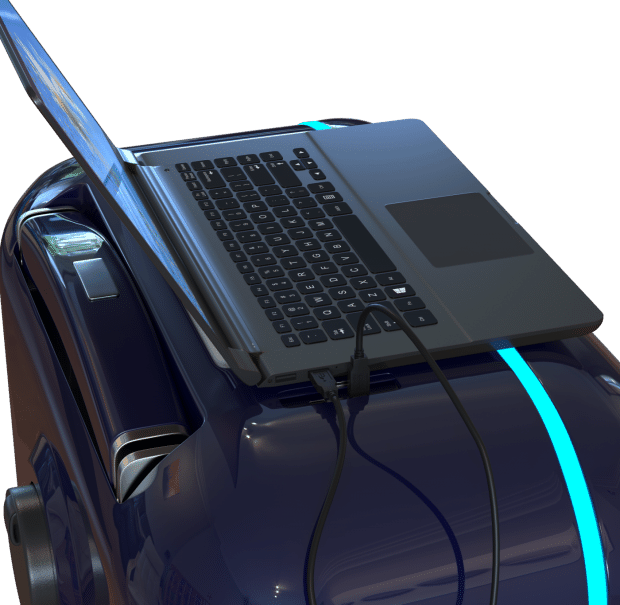 The makers of Travelmate have tried hard to fit in as many utilitarian features as possible in the suitcase and the laptop stand is just one of them. The handle doubles up as a portable desk for your laptops, books or even travel brochures and maps and along with this the suitcase also comes with a unique compartment can be used to stash your valuables.

Keeping pace with the technology the suitcase comes with a fingerprint sensor that can be used to lock/unlock your suitcase. Furthermore, the Suitcase is TSA compliant and the smallest size qualifies as a carry-on baggage.

LED’s and the Battery 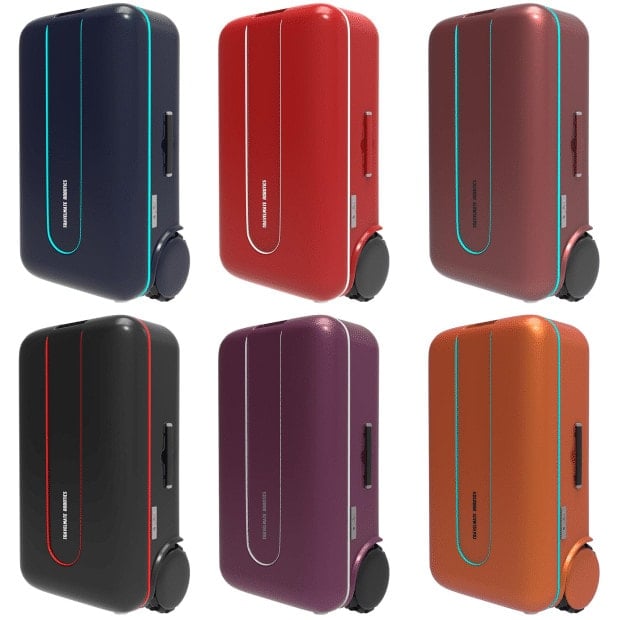 The Travelmate comes with a strip of LED light along its periphery and this is meant to indicate the battery level of the suitcase and also the lights can be customized for other notifications via the companion app. The LED doubles up as indicators and you also get a noisy speaker that will fill you in about the obstacles and the suitcases location, of course, these can be toggled off. Travelmate also comes with a display that will beam the user information including the name of your suitcase.

The Robotic suitcase is all set to shape up as an ultimate companion for the visually impaired and also the elderly folks. And expect the Travelmate to keep chugging along for 4-hours on fully autonomous mode and 100 hours on the manual mode, also wireless charging makes it a breeze to charge this robot. Travelmate is live on Indiegogo and you can back it up for as little as $399, which is a steal, in fact, considering that a run of the mill suitcase would cost you around $120. But then, it’s still in the prototyping phase, and here comes the standard risk consideration about crowdfunding projects.

TechPP is supported by our audience. We may earn affiliate commissions from buying links on this site.
Read Next
Igloohome Smart Padlock Review: Convenience is Key!
#Autonomous Suitcase #Indiegogo #Travelmate