[Event-ually Speaking] More about “John and Me”, Less about HTC

Event-ually Speaking is TechPP’s regular take on tech events of significance, going beyond the Q&A sessions and the presentations. It is our attempt to look at what the event meant for different parties. Eventually. Pun intended.

As the formal presentations ended at the launch of the HTC 10 Desire Pro in India yesterday, and media persons drifted off in different directions – some searching for answers to their queries, some for something more edible – one image summed up the state of the company in the country today. 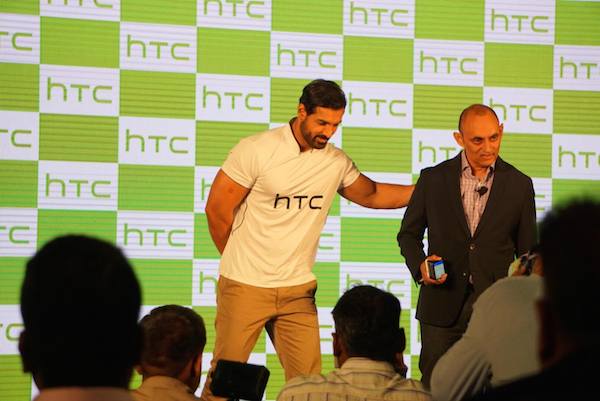 It was of HTC’s South Asia President, Faisal Siddiqui, standing quietly in the center of the room. No one seemed to have anything to ask him. “Are you waiting for a word with Faisal?” a PR executive asked a member of the electronic media. “No, we want a byte from John Abraham,” she was told, the reference being to the Bollywood star who had come to launch the phone. Not that Siddiqui himself seemed to mind. An unfailingly courteous and quiet person who is not given to being demonstrative, he contented himself with a relatively early lunch while most of the invited made a beeline to get a word with John Abraham.

But unruffled though he looked (as always), the HTC South Asia President might have felt a hint of concern at the fact that people seemed to be more interested in meeting the film star who launched his company’s phones than the phones themselves. In fact, even during the question and answer session that followed the launch, the Bollywood star ended up fielding almost as many queries as the HTC President did, and not all of them were about the phone he was launching. And as evening descended and the social networks were flooded with “John and me” (sic) selfies, there was no doubting the challenge that HTC faces in India.

It is of something much more than market share. It is of relevance.

Yes, we know that many people will point out that Bollywood Hero worship is a rage in India, and it is not surprising that people tend to be more interested in silver screen personalities than gadgets in general. But even by those standards, what we saw at the HTC event was unprecedented – it was the sort of thing that you expect when celebrities turn up at events of relatively lesser known brands and end up stealing the spotlight. This time, though, there were two notable phones that were unveiled – the Desire 10 and the 10 Evo – and they came from a company that a few years ago was considered Android’s standard bearer. Three years ago, with the first HTC One, the company seemed to have broken new ground and reinforced its position as the Lord of Android Phone Design. Yesterday, it revealed two beautifully crafted phones – the 10 Evo was delectable in particular – but all the eye candy seemed to be coming from Bollywood, and the queue to be clicked with the star seemed considerably longer than that waiting for a hands-on with the new devices.

And hence the concern. It is not just about dipping market shares or complaints about product after sales service (something the company is trying to address on a war footing – Siddiqui even asked a media person to meet him in person if he had seen something amiss about HTC’s service set up anywhere), it is something that is much worse – disinterest. It was very much in the air at the launch and that should set some alarm bells ringing. Enough has been written about the company’s troubles – too many products, persistence with premium pricing in a world where consumer expectations have been rejigged by the likes of OnePlus and Xiaomi, unconfirmed management issues and the like – but we must confess that we never thought the day would come when HTC would reveal two high-profile products and let the launcher (pun intended) steal the thunder. Even some of the questioning about the product bordered on the aggressive. Not that it ruffled Faisal Siddiqui.

The HTC South Asia President is putting things in place. Quietly and efficiently. He is getting the service network into place (a tie-up with HCL was mentioned). And he says he is not bothered by the competition and actually welcomes it (there was a titter in the audience at this). He also has the products to get HTC back into the spotlight in the Indian market – the 10 Evo is a fascinating piece of hardware that has been very distinctively designed.

All he needs now is to get people to come to an event and look at the phones. Rather than who launches them.

How Apple Aces Tech Presentations: Seven Points (beyond bells and whistles)
Read Next