Reliance Jio officially launched its free welcome offer for public on September 5th this year, and it’s almost three months since the launch. In these three months, Jio has raked in as many as 50 million subscribers. The company’s initial plan was to offer free services till December 31st and then start charging subscribers from January 1st onwards. However, Jio has also set itself an ambitious target of 100 million subscribers and it will extend its free offer beyond December, all the way to March in order to hit that target.

Scale is important in the telecom industry, there’s no doubt about that. The larger the number of subscribers you have, easier it is to spread the costs of running the network. However, it’s also important to note that inorganic growth hardly ever helps in the long run especially in low margin markets such as India where customers are finicky and jump ship everytime they find a better offer elsewhere.

Jio’s infatuation with having a large subscriber base is understandable. When you invest as much as $22 billion in a telecom company, you want to be the No.2 or No.3 very soon. The most common metric by which people measure the ranking of telecom operators is by virtue of their subscriber base.

However, what most people end up forgetting while chasing the subscriber base race is revenue market share. The top three telecom operators in India control around 75% market share while the remaining 8 have to share about 25% amongst themselves. Although a large subscriber base plays a crucial role in helping the top three command a higher share, what also matters is the quality of their subscriber base which is much better than the rest of the operators as seen by their ARPU levels, the number of 3G/4G subscribers and also their VLR (Visitor Location Register) data.

It’s indeed appealing that Jio has managed to gain 50 million subscribers in such a short time frame and may indeed gain its 100 million now that it has extended the Free Jio offer till March 2017. However, the quality of the subscribers Jio is onboarding right now isn’t exactly great. Most people are using Jio as a secondary SIM right now and there’s no guarantee that the company would be able to retain these people once the free offer gets over.

Despite helping Reliance gain millions of CDMA subscribers, the Monsoon Hungama offer relegated the status of Reliance to a network that’s used by the poor or what’s popular known as the “discount network”. Globally, almost every telecom market has a “discount operator”. A discount operator is defined as an operator that competes on the basis of pricing primarily rather than quality. Whenever an operator gives away a lot of freebies, then the tag of discount operator starts lingering around. In the case of Jio, owing to its initial call drop issue and the slow/unusable network speeds being faced by a large chunk of users, their network quality perception has already deteriorated to quite some extent.

As I said, the top three telecom operators have a good quality subscriber base which helps them maintain healthy ARPUs. The 20-80 rule is more applicable in the Indian telecom industry than anywhere else. What the 20-80 rule basically means is that 20% of the customers, generate 80% of the revenue. Post-paid subscribers form just 4-5% of the subscriber base of the top three telecom operators, yet contribute as much as 30-35% of the revenue. These high-paying subscribers are what keep the financials healthy. However, these are some of the most sticky subscribers and poaching them is no easy task.

Most of the high paying postpaid subscribers aren’t willing to compromise on network quality at any cost. They usually earn enough that paying extra to a telecom operator for the best quality network and services is a non-issue for them. These subscribers also end up sticking with the telecom operator in the event of a price hike.

I have already detailed in a different post whether unlimited wireless data will ever be possible in India and at least for the next few years, the answer is a strict NO. Considering that Jio is continuing its free offer till March 2017, the low network speed will continue regardless of whatever network optimisation or carrier aggregation plans Jio has in place. This is because the improvement in capacity will be cancelled out by an even higher number of subscribers coming on board. Some people would argue with me that Jio has revised its FUP to 1GB/day from the earlier levels of 4GB/day. The important point to remember is that the 1GB/day FUP still translates to potential usage up to 30-31GB/month and nothing stops users to buy multiple SIMs and variably increase their FUP. If the first six-seven months (September-March) of your network are going to be plagued with congestion problems and call drops, then high paying postpaid subscribers will be put off. 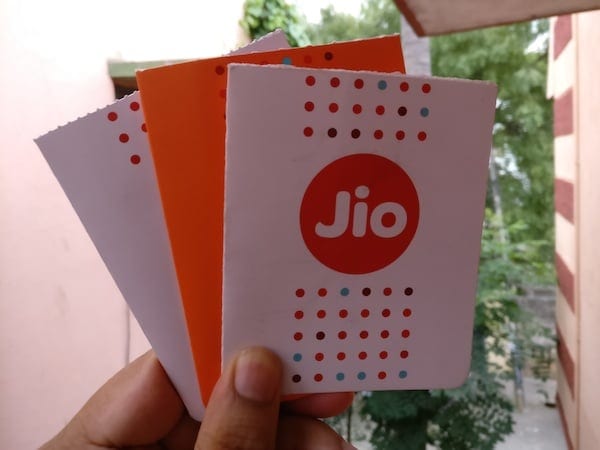 The thing to remember here is while Jio is providing free services at deteriorating quality to gain sub standard subscribers, while the incumbents are quickly filling in their 4G coverage gaps and improving as well as expanding their network. With the recently concluded auction, the top three telecom operators have gained high capacity (2500/2300MHz) spectrum as well as mid band (2100/1800MHz) spectrum in all their top circles. Both Vodafone and Idea have already said that by March 2017, they’ll be covering as many as 20 circles or more with 4G and have been expanding as well as improving their 4G coverage at a blistering pace. Airtel meanwhile was already a step ahead of Idea and Vodafone in terms of 4G and is now making use of its lead to deploy LTE-A.

Jio’s moat had always been its network quality and its competitors are quickly catching up to it. Except for the low band 850 MHz spectrum that Jio has, competitors are now on an equal footing with Jio in terms of spectrum in most of their top circles. Hurting Jio’s ability to gain high paying customers is also its customer service. I would be lying if I said the customer service of Airtel, Vodafone and Idea are flawless but however they seem to be miles ahead of Jio, specially for high paying VIP customers.

Quality wins in the long run

What matters, in the long run, is network quality. Reliance Communications was once the No.2 telecom operator in India behind Airtel in terms of subscriber base but now it’s a distant No.4. The reason for Reliance’s decline has been nothing but it deteriorating network quality for the past few years. Reliance decided to compete in terms of price instead of quality and is now paying the price. Meanwhile, Idea was once the No.6 telecom operator in India and is now a strong No.3; almost all of Idea’s growth has been on the back of strong execution and rapid expansion of the network. Basically, Idea decided to compete in terms of quality while Reliance was competing in terms of price and in the longer term it’s clear that Idea has won.

It is possible to quickly gain millions of subscribers by providing cheap tariffs but this growth will largely be inorganic. The moment you would try to raise tariffs, you would witness large churn. Most operators that gain subscribers via inorganic means are stuck in a death spiral. They don’t want to raise tariffs for the fear of losing subscribers and at the same time, they know that they need more subscribers to continue with the cheap tariffs. So they make their already cheaper tariffs even cheaper, hoping to gain subscribers. While the operator is playing see-saw between maintaining subscriber base and tariffs, the opex/capex requirements only keep increasing, and in a bid to keep tariffs low, network quality takes a significant hit.

When network quality takes a hit, the subscribers that had joined a particular network, not with pricing in mind but quality, they start to leave and they are higher paying subscribers more often than not.

From a consumer point of view, Jio extending its free service to March 2017 would be great, who wouldn’t want free services? Sure, some subscribers who are facing low speeds and call drops would move away from Jio, but the rest can continue to enjoy. But from a business point of view, this is an absolutely disastrous move. The inorganic acquisition of customers would mostly result in sub-standard customer quality which Jio would never be able to monetize to its true potential. In its bid to try and monetize the sub-standard 100 million customers, Jio might end up losing focus on its network and the death spiral scenario I mentioned above comes into effect. Once a telecom operator enters into a death spiral, recovering from it is almost impossible.