Google Keep has been one of my personal favorites when it comes to note taking and creating an archive of important stuff, be it the things to do or the essential stash of information. The clean integration with Google services and co-authoring of notes adds an additional layer of functionality. Well, Google has now added one more functionality, doodling for Chrome users. This feature has already been on Android for quite some time and now Chromebook users can use the doodle function on their touchscreen laptops. 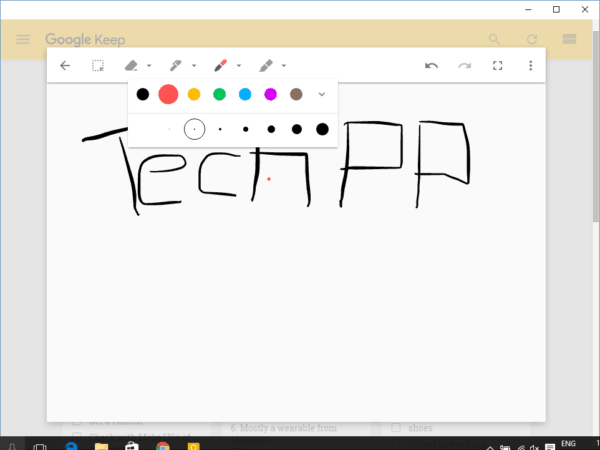 The doodle feature can be accessed by creating a “new note from drawing” and by selecting the pen, highlighter and marker tool. You can choose from 28 colors and also 6 line of thickness options. Also, the app lets you draw on current notes by using the “add drawing” options. However, the app is only available via the Chrome Web store and will not work on any browser including Chrome (will not work on keep.google.com). The drawing canvas can be zoomed and one can also use the undo/redo buttons for edits.

The doodling option is something that is very handy, only if you own a touchscreen laptop else it doesn’t make much sense draw using the mouse pointer. Google’s Chromebook push might eventually phase out Chrome apps on Windows and Mac and the doodling feature seems to be aimed at gearing up for the future wherein we will mostly likely witness a surge in touchscreen Chromebooks.

At a time when Tablet sales are plummeting it is the hybrids like Surface Pro and the iPad Pro that are being preferred, thus it is a no-brainer for Google to come up with touchscreen Chromebooks. Furthermore, Google has already started porting Android apps to Chrome OS and it’s only a matter of time before most of the apps make it to the Chrome Apps store.

TechPP is supported by our audience. We may earn affiliate commissions from buying links on this site.
Read Next
How to Split Screen on Chromebook [3 Easy Ways]
#chrome apps #Chromebook #Google Keep