The Android play store already has thousands of productivity apps you can employ to get things done. However, Samsung thinks there’s a place for another and hence, they’ve launched a new one called “Focus” today. Samsung Focus mainly exists because of two things – a unified view of your contacts, emails, calendar and a universal search for all of them. 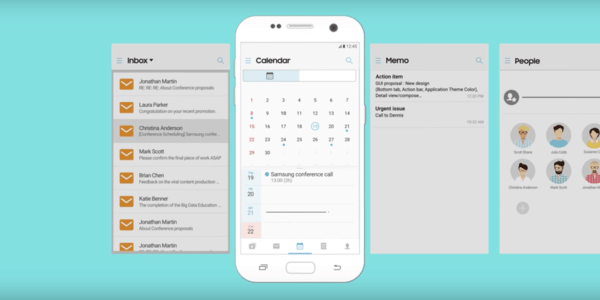 Exclusively available for Samsung phones running Android Marshmallow or higher, Samsung Focus does sound quite appealing especially given its wide support for backend services which include IMAP, POP3, and Exchange ActiveSync. Therefore, it can satisfy requirements of most consumers and enterprises which rely on platforms like Office 365, Outlook, IBM Notes Traveler and more. 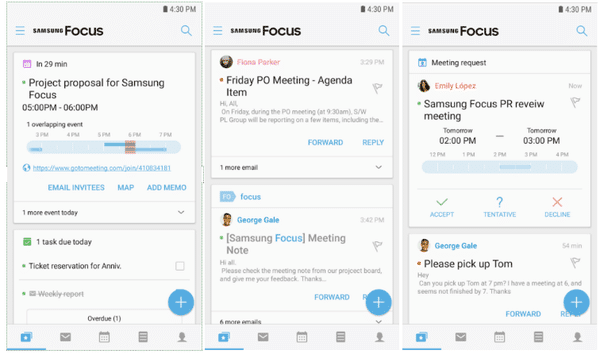 Advertised as a “unified productivity application”, Samsung Focus features five primary pages. The main view which combs through everything and displays detailed cards in a Google Now-inspired feed with appointments, emails. There’s even a floating action button if you’d like to compose a new message or meeting and you can also execute some quick actions such as replying to emails, deleting events and others. The rest of the tabs serve as dedicated views for email, calendar, memos, and contacts. It even supports automatic calendar events and multiple accounts. Furthermore, you can configure keyword alerts, so Focus will alert you when it’s matched in any emails. 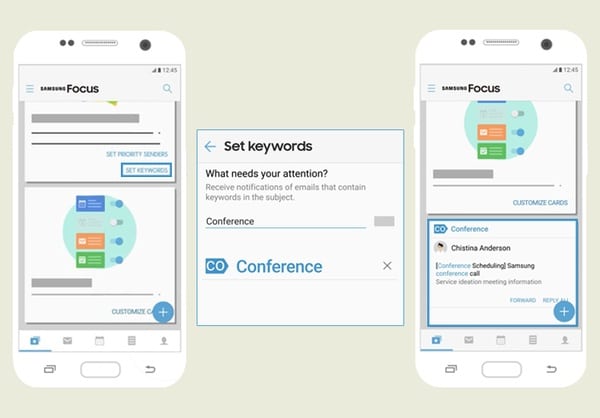 Samsung Focus definitely looks quite interesting, unfortunately, it’s limited to the company’s own lineup. In case you own one of Samsung’s phone, head over to the Play store and give it a shot as it’s entirely free. It’s also possible Samsung might include this by default in their upcoming smartphones such as the Galaxy S8 which is rumored to sport an entirely new AI-powered digital assistant.

The Easiest Way to Move Google Contacts from One Google…
"One does not simply walk into Mordor" - the Indian app…
[First Cut] Samsung Galaxy S10 Lite: Samsung’s Sally into…
amx XP 60 45W USB-C Charging Hub and Infiniti X Type-C to C…
How to Set Default Email App on Windows 11
How to Message Unsaved Contacts on WhatsApp [Android and…