A couple of months ago, “The Phone” to buy if you had a budget of Rs 10,000, was Xiaomi’s Redmi 3S Prime. The device offered unmatched specs at the given price point and created a stir in the market. But a twist has been added to its fairytale, as Lenovo has entered the ring with its own contender for the Redmi 3S Prime. Lenovo recently launched the Lenovo K6 Power in India, which we think is perhaps the best smartphone under Rs 10,000 in terms of multimedia (read our review here). Needless to say, the phone collides head on with the Xiaomi Redmi 3S Prime in terms of specifications. Both the devices at the base offer almost the same fundamental hardware to some extent and separated by a mere Rs 1,000 in terms of price. But which device out of the two is the real deal for someone seeking a phone under five figures? Let’s find out! 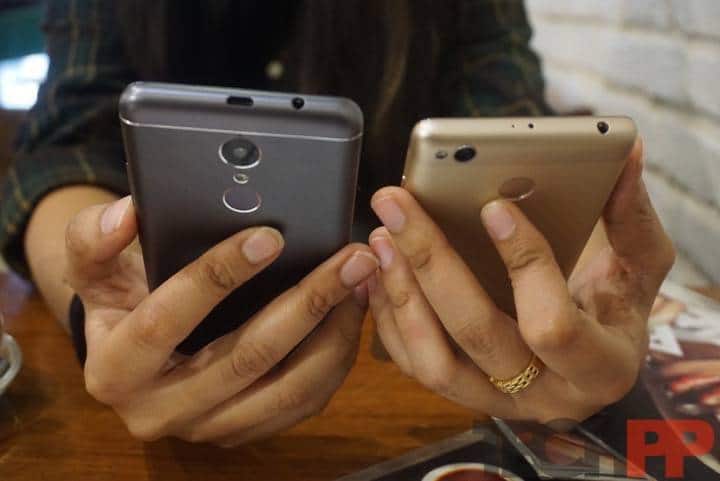 Round One: Design and Display

The smartphones which look like “Karan-Arjun” (brothers from a Bollywood film, who get reborn as brothers again, but THAT is another story – suffice to say, they are close!) from the front are distinctively different from the back. Although both smartphones offer metal unibody design but the placement of the camera, the LED flash and the fingerprint sensor draws a line between the two smartphones. The two devices nearly weigh and measure the same but the Xiaomi Redmi 3S Prime is slightly lighter and smaller in size with the measurements 139.3x 69.6x 8.5 mm and weighs 144 grams as compared to Lenovo K6 Power that measures 141.9x 70.3x 9.3 mm and weighs 145 grams.

Xiaomi Redmi 3S Prime has not highlighted the antenna bands on the back and has kept it relatively simple and plain. The top left side of the back sports the camera along with the flash. The fingerprint sensor on the Xiaomi Redmi 3S Prime is placed just below the antenna band on top and has got the silver finish on its circumference which is missing from the camera and flash in the smartphone. The Mi logo has been placed near the second antenna band towards the base which is followed by the speaker grille placed just below the second antenna band. Along with the display, the front of the screen carries the earpiece, the front camera, and the proximity sensor and just below the screen are three capacitive buttons. There is a SIM card tray which pops out from the left side of the phone while the right side carries the volume rocker and the power button. The top of the smartphone carries the 3.5 mm audio jack along with an infrared port whereas the base of the smartphone holds the Micro USB connecting slot. 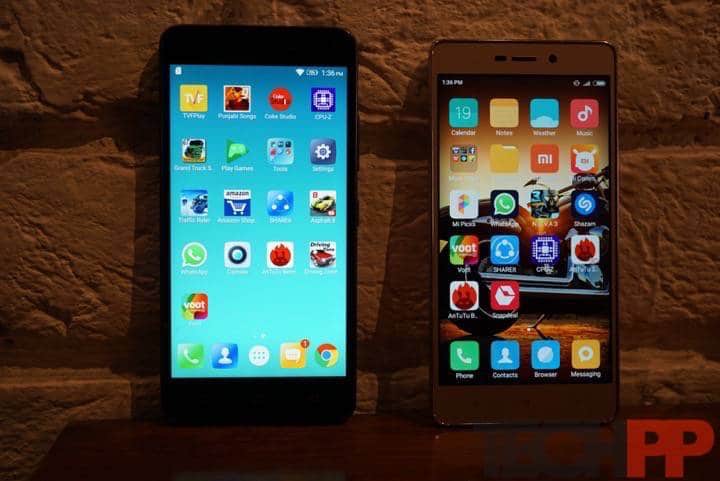 In terms of looks of the K6 Power, Lenovo has definitely taken some inspiration from – oh the irony – Xiaomi because the smartphone which looks like a sibling of the Redmi 3S Prime from the front looks like a twin of the Redmi Note 3 when it comes to the back. The back of the phone carries two shiny silver antenna bands on top and bottom. There are three very significant circles for the camera, flash and the fingerprint sensor in a line just below the antenna band on top. What helps the K6 Power to gain a little edge over the Redmi 3S Prime is the shiny metal lining on the circumference of all the three circles. We think, the addition of silver on the back gives the budget ranged phone a little premium feel. Lenovo has placed a small Lenovo logo just above the second antenna band followed by the two speaker grilles.

The front of the phone is relatively simple and follows a very generic pattern. Along with the display the front of the phone sports the earpiece, the front camera and the proximity sensor. And below the screen are the three capacitive buttons. Just like the Redmi 3S Prime, the Lenovo K6 Power also carries the SIM card tray on the left-hand side and power button along with the volume rocker are placed on the right.

Another differentiating point in terms of design lies on the top and base of the smartphone where Lenovo has placed both; the Micro-USB port and the 3.5 mm Jack on the top and has kept the base plain. There is no infrared port in the Lenovo K6 Power. 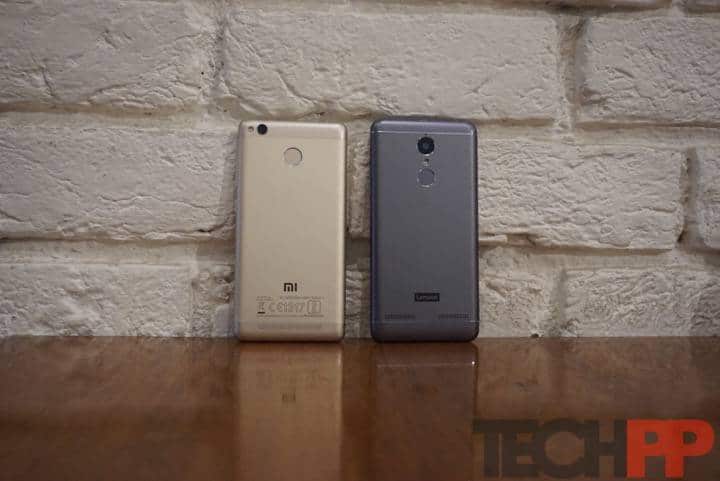 The two devices are very similar in terms of hardware. The Lenovo K6 Power and Xiaomi Redmi 3S Prime, both run on Octa-core 1.4 GHz Qualcomm Snapdragon 430 CPU paired with Adreno 505. The two smartphones come with 3 GB RAM and 32 GB internal storage which can be further expanded up to 256 GB by using a MicroSD card. They both come with a 5-inch display and sport a 13-megapixel primary camera with PDAF and LED flash.

Both run on Android Marshmallow topped with different UIs of the companies namely, the VibeUI and MIUI 8. One can use two SIMs in the two devices at once (in both, one of the SIM card slots is a hybrid, allowing you to use a micro SD card). The connectivity options on both the devices include 4G with VoLTE support, fingerprint sensor, dual Nano-SIM card, Bluetooth, Wi-Fi, USB OTG support and GPS.

Taking everything into consideration, we think Lenovo K6 Power wins this round.

Round Three: Software and UI

Both the smartphones run on Android Marshmallow 6.0 but the are topped with different in-house UIs. The Xiaomi Redmi 3S Prime runs on MIUI 8 whereas the Lenovo K6 Power runs on Vibe UI. Both the interfaces are simple and easy to get your head around. The Vibe UI in the K6 Power is more inclined towards stock Android which means the company has avoided integrating a number of third party apps which can at times create a bit of a mess. On the other hand, MIUI comes with a number of Mi apps but we think the interface is more interactive as compared to the VibeUI. The UI takes permissions and gives out notifications in a less formal way which we think is totally a breath of fresh air – yes, it does have pre-installed apps but they do not seem as much of a liability as they did in say, for instance, Asus’ Zen UI. So, we think it will be fair if we give this round to Xiaomi’s Redmi 3S Prime. 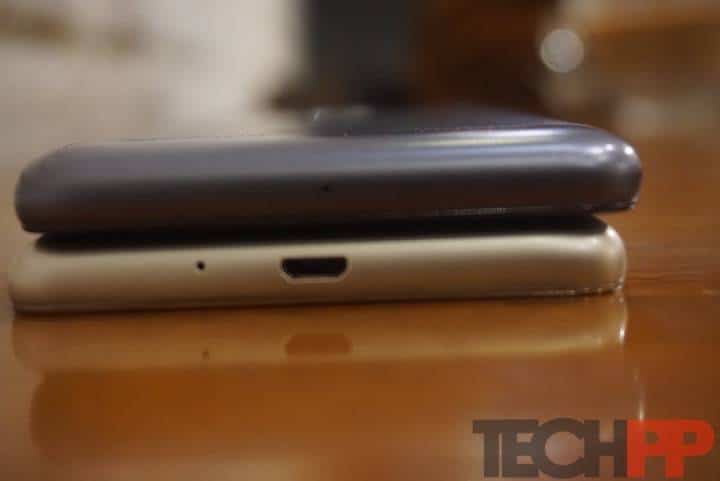 We think we should rename this round as “The Lenovo K6 Power” round as the company has been betting heavily on multimedia for the success of the device. As discussed earlier, the K6 Power obviously has got an upper hand in case of the display as it sports a full HD display as compared to Redmi 3S Prime’s display that comes with a screen resolution of 720×1280 pixels.

Moving towards sound, the Lenovo K6 Power comes with stereo speakers as compared to Xiaomi’s Redmi 3S Prime which comes with a single loudspeaker. Another plus point of the K6 Power which the company has highlighted is the integration of Dolby Atmos audio enhancement. The sound of the K6 Power comes out clean and loud and can give many other smartphones sitting in the high-end price range a run for their money, leave alone the Redmi 3S Prime.

Lenovo has also incorporated Theater Max technology in the smartphone which gives you the feel of watching movies and videos on very large screen, of course with the help of the VR headset which is sold separately. This makes watching videos and movies on the smartphone a treat. Which is why we think the Lenovo K6 Power has got the multimedia round in the bag.

Round Five: Gaming and Multitasking

The phones are on the same level when it comes to the hardware but the performance difference between the two devices is rather different.

Both the handsets handle multitasking with ease. We did not really face any problems while switching from one app to another while there were a couple of apps working in the background. The two smartphones were more or less like game ninjas in terms of light games like Temple Run, Color Switch and Candy Crush but the real test began when we tried to run heavy games on the smartphones. Xiaomi Redmi 3S Prime struggled with games like Asphalt 8, Asphalt Xtreme and NFS No Limits and lagged quite heavily but the K6 Power surprisingly handled these games smoothly in comparison. We faced some stutters here and there initially but the device managed to run the games smoothly, and of course, having better sound and a better display helps. Only one winner here.

Even in terms of colors, the camera of K6 Power generally produced better colors and more vibrant as compared to Redmi 3S Prime which produced images which were a little more bright than the subject itself. There were fluctuations in performance, but all in all, we think the K6 Power was delivering more realistic images, although it does tend to lag a little while processing the images, Therefore, we think the K6 Power takes this round as well.

Round Seven: Battery and General Performance 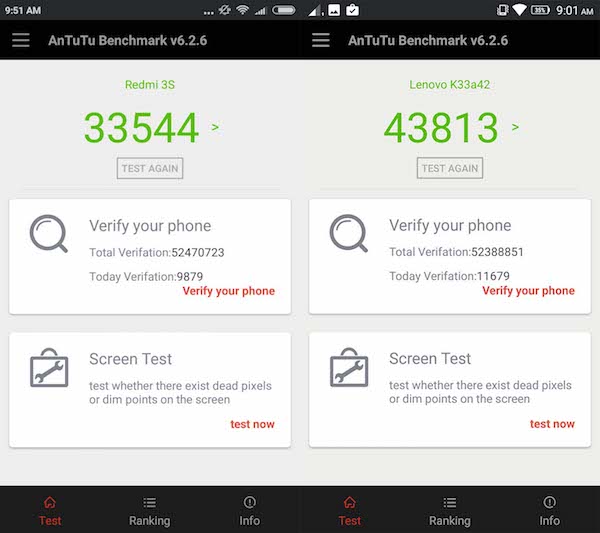 Both the devices go neck to neck in terms of general performance. The two devices are relatively compact and offer massive batteries at the given price point. The Lenovo K6 Power comes with a 4000 mAh battery whereas the Redmi 3S Prime is powered by a 4,100 mAh battery (yes, it has a slightly larger battery, even though the device is slightly lighter and smaller in size) The two handsets can last for up to two days with single charge and can get charged completely in around 2-2.5 hours. But the Redmi 3S Prime actually can pull itself out for a little longer than the K6 Power. Both the smartphones support two SIMs and sport hybrid SIM slots for expandable memory. Call quality in both devices is about the same but if we had to pick one, we would go with the Redmi 3S Prime as we found the earpiece on the K6 Power to be slightly lower in terms of volume. Which is why this round goes to the Redmi 3S Prime.

Round Eight: Value For Money

Xiaomi has priced the Redmi 3S Prime at Rs 8,999 whereas Lenovo has priced the K6 Power at Rs. 9,999. There is a difference of Rs. 1000 between the two devices which can be a matter of importance for consumers looking for smartphones in this range (hey, this is the budget range after all), but then Lenovo is providing a significantly better display and speakers for the extra bucks it is charging. We are scoring this one for the Lenovo device. 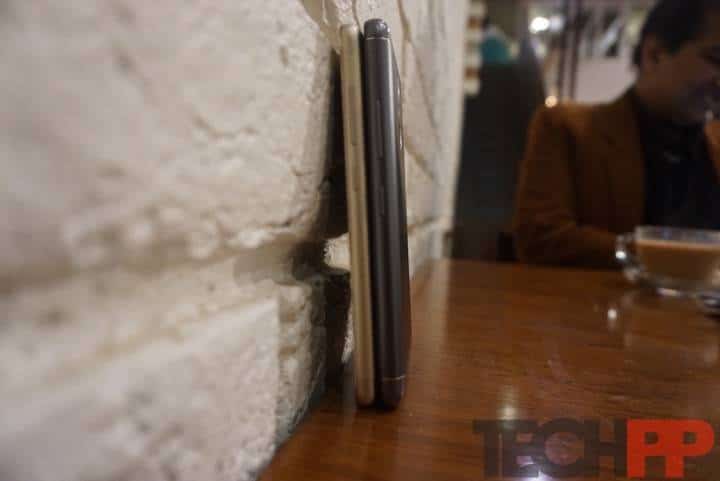 In terms of the scoreboard, it seems like the Lenovo K6 Power has run away with it. The K6 Power wins six round out of eight but the two rounds Xiaomi has won are kind of crucial. Hey, UI, battery and general performance can make a whole lot of difference. So the ones looking for ‘Kickass’ multimedia and a great display in this price bracket should opt for Lenovo K6 Power but those for whom multimedia is not that great a priority or for whom a friendly UI is more important should opt for the Redmi 3S Prime. If we had choose between the two devices, we would be putting our finger on the K6 Power but we would be ruling out the Redmi 3S Prime altogether at our peril.

Was this article helpful?
YesNo
TechPP is supported by our audience. We may earn affiliate commissions from buying links on this site.
Read Next
Snapdragon 782G vs Snapdragon 778G Plus: What Has Changed?
#comparison #Featured #Lenovo K6 Power #Xiaomi Redmi 3S Prime