WhatsApp seems to on an update spree in the past quarter. From adding video calling to GIF compatibility, the messaging service has managed to bring out most features that their users have been demanding. However, the Facebook-owned messaging app isn’t done yet and has pushed an update which brings a native GIF browser. 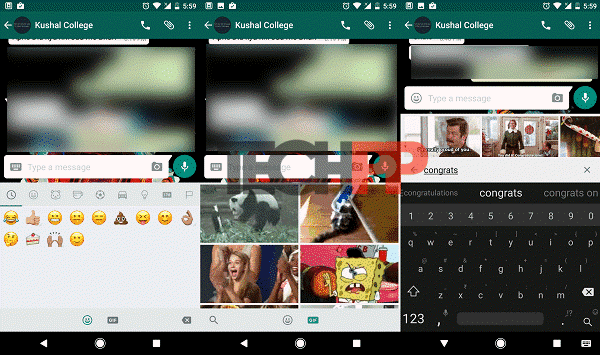 The WhatsApp beta update 2.17.6 is now rolling out to testers and adds a straightforward GIF browser powered by the popular GIF keyboard, Tenor which is owned by GIFHY. The new button is located under the emoji section, pressing upon which reveals the top browsed GIFs recently. You can tap any of them, add an additional caption and send. Furthermore, it also comes with a search button through which you can locate a particular file. It’s surprisingly quick like WhatsApp’s other features and as a result even works on slow connections. Additionally, these GIFs will also have a “tenor” watermark. Other than that, though, there aren’t any new features as it seems, we’ll keep you posted if there are any.

While the update should roll out to the general public eventually, you can get an early access by downloading the beta version. For subscribing to WhatsApp’s beta channel, head over to this link, enter the email address which is associated with your Android phone and press the big rectangle button. If you don’t want the hassle of updating the application almost every week, you can also download the APK by heading over to this APKMirror link. However, It seems like the change is from the server side, hence there’s a chance you won’t see the update despite being on the latest beta version. Additionally, the GIF browser is also available on WhatsApp Web in case you’d like to give it a try.

WhatsApp is definitely on the right path here as they’ve amended most issues people complained about. Also with this beta, the media restriction has been relaxed from 10 items to 30. Although it will be interesting to see if they release any business specific features this year as that’s probably the only thing left.