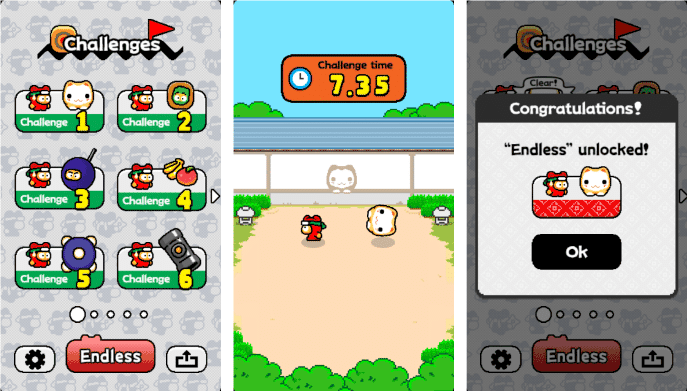 This time around Japan’s Obokaidem has joined hands with Nguyen who by the way runs his own gaming studio based out of Vietnam. Ninja Spinki Challenges is mind numbingly frustrating and despite offering a better variety as opposed to Flappy Bird the game can soon eat into your productivity.

Ninja Spinki Challenges is available for both iOS and Android and is made up of six minigames with variations in difficulty and the time limit. Also, all the levels allow the users to compete against a different Ninja Spinki character. Before writing this article I was glued to my smartphone for at least an hour and that is when I realized some of the levels are almost impossible to clear. The levels require a great deal of concentration and quick reflexes in order to clear.

Once you are a level up you will be able to unlock the forthcoming stages and the games mostly revolve around swiping and tapping gestures. Ninja Spinki Challenges offers two modes, the endless mode in which you can set a time record and the challenge mode in which you need to survive for the given time without being hit. As I began my march to the second level the things got crazier and a minute lapse in my concentration would bring up the “Game End.” The game involves dodging characters, hitting characters and also ensuring that you don’t get hit by stuff like automated canons.

Interestingly Nguyen agreed to team up with Obokaidem only after he was assured complete control and since both the studios made 8-bit games things worked out. Obokaidem is not a stranger to the gaming world and in fact, its previous game “Greening the Planet” has been downloaded more than 2.5 million times. Apparently, the title was supposed to be released in December but the word of the launch was out and developers started creating pirate versions of the game. That said I could still spot one or two pirate versions on Google Play Store.

Revenue generation is only through in-game ads and that comes as a kind of relief from the freemium model. The game offers a limited number of attempts to retry the level from where you left off by watching ads. Again the ads are not intrusive in nature and do nothing to sabotage your gaming experience.

TechPP is supported by our audience. We may earn affiliate commissions from buying links on this site.
#Flappy Bird #Ninja Spinki Challenge