As we approach the official unveilings of this year’s some of the most significant smartphones, leaks have started pouring in abundance. However, unlike the LG G6, Samsung’s eighth Galaxy flagship seems to have been well hidden under the drapes, until now. According to a new report by the infamous Evan Blass (evleaks), the Galaxy S8 will be shown off on 28th March, away from the Mobile World Congress’ limelight. 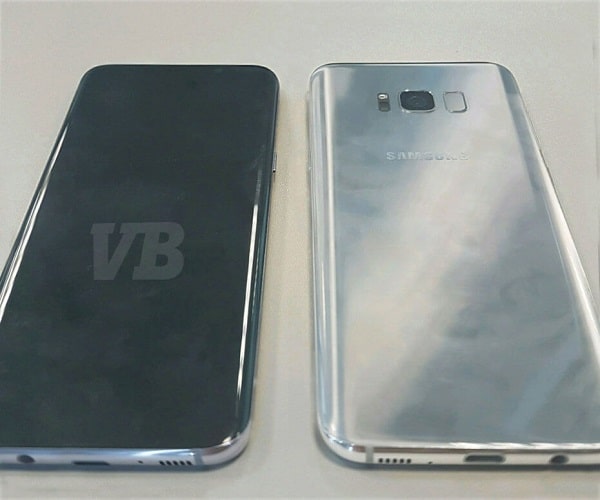 Furthermore, Blass also shared an image that reveals the Galaxy S8 will feature an iterative design upgrade rather than a complete reboot which isn’t particularly a bad thing. Additionally, Samsung has removed almost every front component including the fingerprint reader and hardware navigation buttons to make room for a larger display with minimal bezel, a trend we expect to go standard in the smartphone industry this year. Speaking of the biometric reader, the fingerprint sensor has been shifted to the back, and the front camera houses an iris scanner instead of a dedicated opening.

The leak also confirms the specifications which were originally reported by the Guardian. This time around too, there will be two variants – a 5.8-inch and 6.2-inch, both with a QHD resolution, an aspect ratio of 18.5:9, and Super AMOLED panels. Moreover, both the models feature Samsung’s signature “Edge” display, which now curves downwards on either side.

In terms of sheer specifications, though, the Galaxy S8 will come with Android Nougat out of the box, Qualcomm Snapdragon 835/unknown Samsung Exynos processor depending on the region, 10-nanometer chips, 4GB of RAM, 64GB internal storage which can be expanded to 256GB via a MicroSD card, and 3000/3500mAh battery packs. It’s also worth noting that Samsung has finally jumped on the USB Type-C bandwagon and has ditched MicroUSB. Oh, and cheer up, there will be a headphone jack.

While the optics are said to largely remain identical, Samsung will be embedding a new visual search functionality that will allow the phone to detect what is being scanned and show search results accordingly, sort of like what Amazon did with Firefly.

With the S8, Samsung is also getting serious about software. One of the features they’ve added is the ability to connect your phone to an external monitor (via a proprietary dock) for revealing a desktop view of Android – Samsung DeX. The user can then control it through a keyboard and mouse. Furthermore, it will sport the Korean giant’s highly rumoured artificially intelligent assistant – Bixby and while most of its details are unknown at the moment, it will reportedly handle more complex commands than its fellow competitors. You will be able to invoke Bixby using a voice of course and also, by pressing the dedicated button on the side. Lastly, the S8’s display will be capable of intercepting multiple pressure levels a.k.a Force touch.

The new handsets will cost €100 more than last year’s models, the 5.8-inch variant will retail for €799 and the 6.2-inch model at €899, sales for the same commence on April 21. The Galaxy S8 definitely looks promising at this stage, however, it will all come to execution and how well they’ve integrated these new technologies. Also, they’ll need to specifically address the changes they’ve made to avoid explosions this time. We’ll have to wait two more months to get the first official look.

Nothing like anything: Phone (1) has brought a design edge to the mid-segment
Read Next
Source: Venturebeat