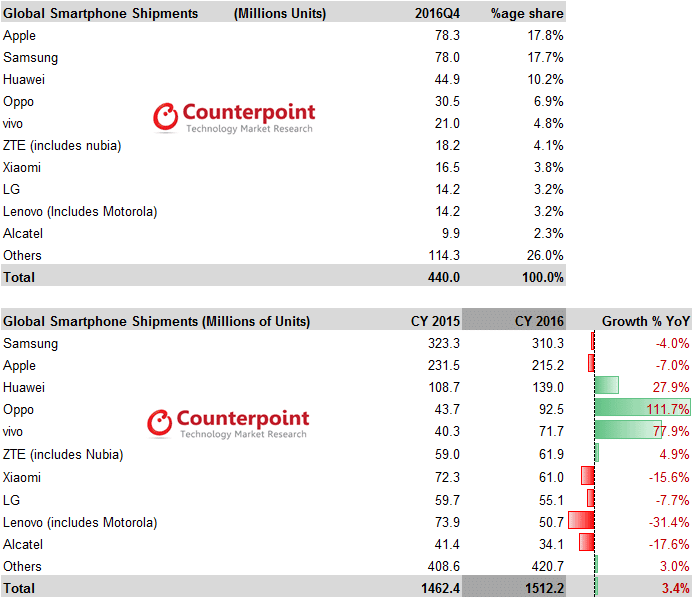 Analysis and reports are often riddled with numbers. While data is indeed beautiful for some, it’s just gibberish for others. In this section, I will mention the highlights of the report which will set a precedence and allow us to deduce the figures further.

Smartphone shipment has reached a staggering 1512 million units in 2016 with 4 out of 5 smartphones being shipped being LTE enabled. Also, 80 percent of the mobile phones shipped were smartphones and the top ten brands contributed to nearly 75 percent of the shipment volumes in 2016. As expected, USA, China and India were once again attributed as the highest contributors to the shipments by accounting for nearly 50% of the smartphone shipments. The report also mentions how it was an excellent year for the Chinese brands as they got the due recognition and also expanded successfully to overseas market.

Despite the Note 7 debacle, Samsung seems to have retained its numero uno position with a total market share of 21% in 2016 despite the 4% decline in YoY shipments thus registering 310 million units. Consequentially, Apple surpassed Samsung with a push from a record quarter during the holiday season(Q4). Also, the Average Sale Price (ASP) for Apple hit an all-time high of $695, thanks to the strong sales performance by iPhone 7 Plus. However, statistically, the YoY growth with regards to Apple and Samsung is still in single digit negatives.

Huawei, Oppo, and Vivo have been battling out both globally and in the domestic market. Huawei has registered a strong 27.9% YoY with a shipment number of 108.7 Million units and has thus secured the third place. Oppo, on the other hand, has achieved the tremendous growth at 111.7% with a total shipment of 43.7 million. As one might have observed, there exists a gulf of difference between the total number of smartphones shipped by Huawei and Oppo. However, Vivo is closing the gap with Oppo and is trailblazing with a total shipment number of 40.3 million which is just 3 million shy of Oppo’s shipment figures.

Also, Huawei has been able to achieve some great traction in the premium market with the P9 and the Mate 8 while Vivo and Oppo were fastest growing brands in the second half of 2016, thanks to their strong offline distribution channels in countries like India and China.

ZTE and Xiaomi have been pegged at sixth and seventh positions respectively. Xiaomi’s demand for smartphones declined 16% and the reason for this is said to be the fierce competition from its rivals and the lack of offline distribution channel in China and India. Despite strong sales in India, Lenovo’s sales have dropped by a whopping 31% Y-o-Y pushing it down to the ninth place, below LG and above Alcatel (TCL).

TechPP is supported by our audience. We may earn affiliate commissions from buying links on this site.
Read Next
With Ear (1), Nothing Could Be Creating a New Segment in the Indian TWS Market
#Counterpoint #Global Smartphone Shipment