[Tech Humor] Genie, Get Me a Phone!

The geek had no idea what the bottle contained. It had been a long night though – one in which he had spent hours trying to explain to a client why cookies on a website were not called biscuits – and he was seeking spiritual peace. He hoped the contents of the bottle were alcoholic – that was the sort of spirituality he needed at the moment.

He picked up the bottle. Opened it.

And sure enough, out came a spirit. But not of the alcoholic type. This was something that looked like the product of an all too hasty mating between a large potato and an unwashed sack, and it seemed to float in the air, had a distinctly vaporous appearance, and a sense of dress that was definitely more BC than Versace. He (we assume it was a “he” because of a profusion of facial fungus on either cheek, a moustache, and a voice that sounded like Robin Williams) was, in short, a genie. 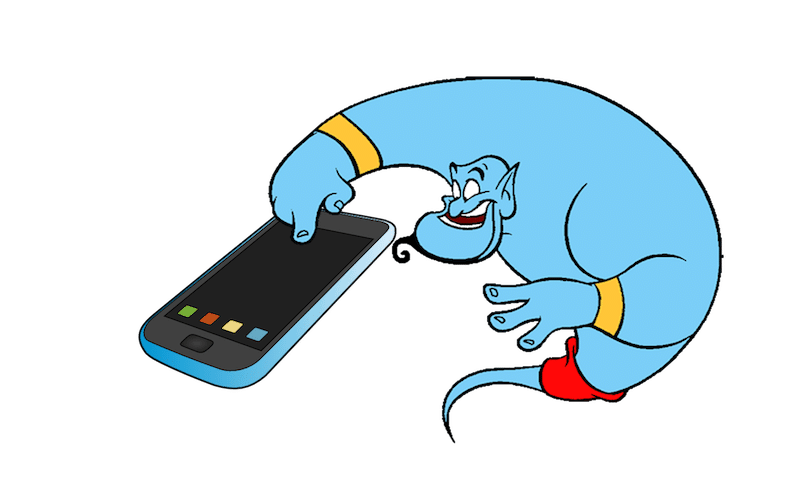 “Thank you for freeing me from that urology lab bottle, my friend,” he boomed at the geek. “I am an all-powerful genie and I will…”

“Wow!” the geek interrupted. “So you can grant me three wishes. I want a date with Selena Gomez, four billion dollars and…”

“Hang on, lad,” snapped the genie. “Times have changed. There has been demonetisation. Governments have been Trumped. You now get only one wish!”

“Oh all right,” said the geek. “Ten billion dollars then, of which one billion in tens, two billion in hundreds and…”

“Steady, pasha,” the genie butted in again. “As I said, times have changed. You get just one wish. And given the new terms and conditions, I get to make it.”

“What! That’s unfair!” shouted the geek.

“Lad, you are getting a freebie from a smoky, mystical being coming out of a bottle. What are you complaining about?”

The genie looked the geek up and down, checked the battered jeans, the dishevelled hair, the crazed expression and the clutched smartphone. He thought and then spoke:

“Behold! I give thee the power to get a new phone!”

“A phone?” the geek shook his head. “Can’t I get a date with Selena Gomez?”

“All right, just one billion dollars. In whatever denomination.”

“Oh all right,” said the geek. “Can I do some research online and drop you a mail?”

“Dude, I live in bottles and air. No mail access! Tell me which phone. Now!” snapped the genie.

The geek looked at his current handset. Well, all said and done, perhaps it WAS time to upgrade. And the genie did say he could get options. A thought suddenly struck him.

“Even from the future?”

The genie pondered this. “It would have to be a logical extension of the roadmaps… hmmm… well with some mystical extrapolation, I guess that could be managed. Go right ahead!”

“I want an iPhone from the future.”

“Nah,” said the genie. “You have to be particular. Give me a model name!”

The genie pulled out a crystal sphere out of thin air and looked at it.

“Hmm…which edition? This one says there could be six – the miniSE, the SuperSE, the SE, the iPhone, the iPhone Plus and the Mini iPhone Plus…”

“Which is the best?”

“Well, let’s go with the iPhone Plus then!”

“I told you -the iPhone Plus!”

“No, Sultan! There are different variants – there are two camera, three camera and four camera versions…”

“Four cameras? Take that one!”

“There’s nothing of that name here!”

“Dude, there is a phone by Google here but evidently even the company does not know its name. Evidently, there will be a rebranding to accommodate a new version of Android called DissIsADessert! ”

“Wait, wait, wait…is there not a simple phone out there?”

“Is there a phone that is just a simple one. Just one version?”

“You seen the present, sahib?”

“You have got so many variants already of every damn phone. What makes you feel it is going to change in the future?”

“…is always defeated by commercialisation, old chap,” said the Genie. “Way of the world. Many models mean more sales. Confusion be damned.”

The bytes in the geek’s soul kicked in.

“Wait, can I make my own device!” he asked

“Hmm…I don’t know much engineering, but if you stick to functionality, we could try. Just don’t give me too many details, just stick to the outlines. And get a move on. I have a party to attend. I don’t have all day to sit around waiting for just one wish”

“Right,” he said. “Gimme something that is a pearly white, water and dust resistant, and has a fluid interface that can be refreshed easily…”

“What network?” asked the genie.

A thought struck the geek.

“Wait, can I use it to talk to anything?”

“Pretty much,” said the Genie. “If it has a language, you can speak to it…”

“I want to speak to the Almighty,” said the Geek.

“Nature, eh?” said the genie. “Done! Close your eyes and when I say abracadabra, open your eyes and you will see your device. Bye! Thanks for the bottle opening and it was fun chatting.”

And then the genie said the magic word

Where he had floated there was now a product. The geek looked in disbelief.

It was pearly white all right. And it did seem resistant to dust and water. And it had a fluid interface definitely. And a small handle titled “refresh” as well.

Tagged to it was a small notice: “When nature calls, answer!”

It was a toilet.

Get a Notification Light on Your Android Phone in 2022 with…
Poco X4 Pro Review: The best phone you can get for Rs…
OnePlus showcases its Concept One with Invisible Camera Tech
Tech Media: A Comedy of Embargoes
[Tech Talkies] Vikas Agarwal, OnePlus India: The Clark Kent…
[Tech Ad-ons] Apple "Holiday - The Surprise": Heartwarming,…