For the past few years, companies have attempted to turn smartphones into the ultimate computing device anyone can own. Whether it’s Microsoft’s Continuum for Windows 10 or Canonical’s Convergence feature on Ubuntu, these efforts have largely gone futile due to the lack of sufficient users on their respective platforms. However, Jide, the company known for designing desktop counterparts of Android, has announced a new mobile OS which will allow Android phones to power large-screen monitors through a dock. 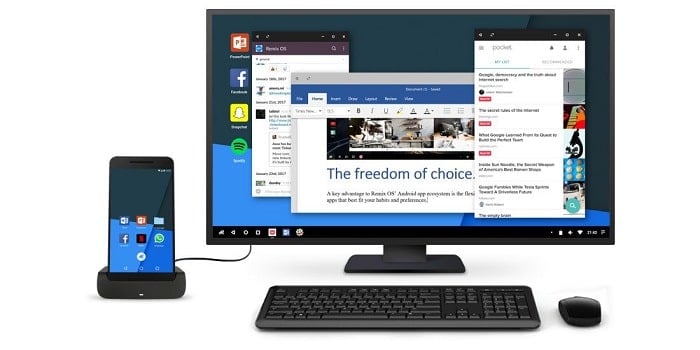 The operating system is called Remix OS on Mobile (ROM), and it comes with “Remix Singularity” which is what drives the dockable connection. The concept is nothing different than what others have been doing – you connect your phone to a monitor, keyboard, and mouse via a dock, and use Android as a complete desktop OS with apps like Google Docs or Clash of Clans running in floating windows, taskbars, and whatnot. If you aren’t interested in the computer mode, you can just plug the smartphone into a screen, and have an Android-powered television.

Basically, what sets Remix Singularity apart is the fact that it is based on Android which is substantially more versatile, and powerful than say, Windows 10 Mobile. The Remix OS on Mobile OS itself will be mostly, kept “as close to stock Android as possible”. However, this too suffers from crucial drawbacks, mainly because of the limited power, and resources available on your tiny handheld. Unless your work doesn’t demand much, chances are you won’t be attracted by this setup. Furthermore, there’s also the question of portability. A laptop-compatible with this technology is plausible but that leads to another argument, why not just rely on cloud services? 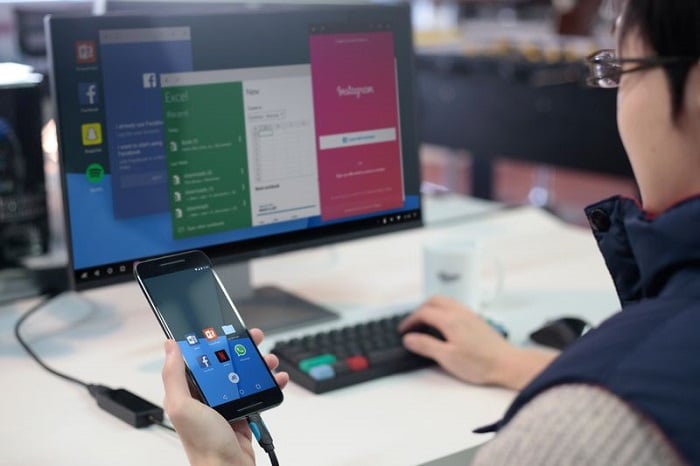 Speaking to The Verge, Jide’s co-founder David Ko says, “In the next five years, roughly five billion people will be coming online, and when they come online, their number one choice will be the smartphone; an affordable smartphone, and that will be an Android. If your phone can replace [your PC], it’s a huge saving, and has a big impact on productivity,”. His ideal environment involves users carrying just their phones, and connecting to a desktop setup at workplaces or homes.

Jide is, as of now, looking for hardware partners for bringing this tech to the customers. However, the company also mentions that the ROM will be available to download free of cost if people want to try. Remix Singularity is scheduled to be released sometime this Summer. Samsung, in fact, is also rumored to announce a similar feature for its Galaxy lineup with the S8 called Samsung DeX. Let’s see if this will be the year where smartphones inch any closer to replacing our full-fledged computers.

TechPP is supported by our audience. We may earn affiliate commissions from buying links on this site.
#Jide #Remix OS on Mobile #Remix Singularity