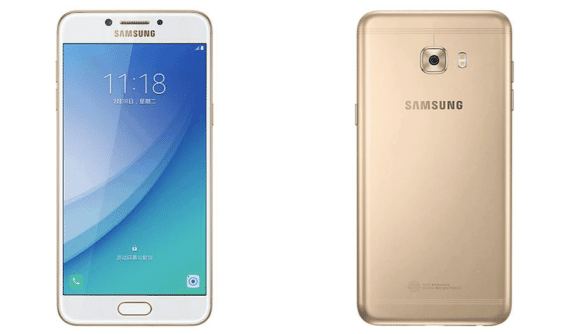 Under the hood, the Samsung Galaxy C5 Pro packs the latest Qualcomm Snapdragon 626 octa-core SoC which consists of Cortex A53 cores clocked at 2.2 GHz each. This is mated with a flagship level 4GB RAM and 64GB of internal storage. Samsung Galaxy Pro C5 also offers a MicroSD card slot that accommodates memory up to 256GB.

As for the cameras, the Samsung Galaxy C5 Pro comes with a set of 16MP shooters which has now become a standard in most upper mid-range devices of the Korean firm. Both the cameras, rear and front comes with a f/1.9 aperture. It’s worth noting that the rear 16MP camera is slightly protruding and sits right in the center of the metal back, just below the top horizontal antenna line. That said, both these 16MP sensors are capable of shooting Full HD (1080p) videos.

The Samsung Galaxy C5 Pro is powered by a modest 2600 mAh non-removable battery. Apart from that, the C5 Pro comes with USB Type C, Bluetooth 4.2, GPS and NFC. The smartphone runs on Android Marshmallow 6.0 with the company’s own TouchWiz UI on top. It is priced at 2499 Yuan (Rs 24,133/$362 approx.) and will go on sale in China starting March 16. The Galaxy C5 Pro smartphone is currently available for pre-orders on the Samsung China website. It is available in three color variants – Lake Blue, Maple Leaf and Powder Rose.