Samsung has announced a new Gear 360 camera at its Unpacked 2017 event. It was launched alongside the company’s highly anticipated Galaxy S8 and Galaxy S8+ flagship smartphones.

The Samsung Gear 360 (2017) comes with an improved design. It now looks more like a button mushroom, with a spherical part containing the two fish eye lenses and a stalk for holding the camera. This design is a major change over last year’s model, which apparently came with three foldable legs that worked together to form a miniature tripod. Apart from that, being an action camera the Samsung Gear 360 comes with IP53 water and dustproof certification.

The new stalked design of the Samsung Gear 360 may, however, tempt a large number of users to shoot handheld videos with it. Frankly speaking, that may result in a jittery 360 footages, as the camera isn’t really intended to be used in that manner.

It goes without saying that the buttons to have been displaced from their previous position in the new Gear 306. The record button along with the display showing various information related to the video is now located on the stalk instead of on the top of the camera. That aside, the non-moving grip handle or the stalk of the camera sports a rubber ring that helps stabilise the Gear 360 when placed on a flat surface. 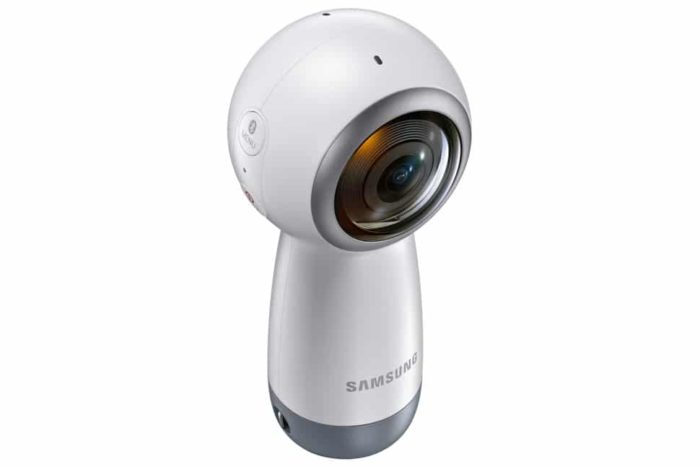 Talking of lens, the new Samsung Gear 360 comes with a pair of 8.4MP that can shoot 360-degree videos in 4K (4,096 x 2,140p) at 24fps. It effectively means that each of these 8.4MP lenses has the capability of shooting 180-degree wide angle video. Thereafter the footage shoot from two videos is stitched together to generate a 360-degree video. Apart from that, the portable 360 cameras from the Korean electronics firm comes with a 1,160mAh battery which is slightly smaller than the 1,350mAh unit found in last year’s model. The Gear 360 also comes with WiFi 2.4GHz/5GHz WiFi, Bluetooth 4.1 and a slot for microSD card.

Samsung has worked around with the main disappointment of last year’s Gear 360, as the new camera now supports just any Android smartphone running 5.0 or above and a recent version of iPhones. For the uninitiated, last year Samsung Gear 360 came only supported a selected range of Samsung phones like Galaxy S7 and S7 Edge.

The Korean electronics giant has also made some improvement to this year’s camera, in terms of software. The new Samsung Gear 360 can not only capture video in true 4K but also sent them wirelessly to a smartphone and then upload them as Live Broadcast on YouTube or Facebook. Samsung hasn’t revealed the price or availability of the action camera yet. It would be interesting to see whether the Korean firm prices it below last year’s $349 (Rs 22,670 approx.) worth Gear 360.