After launching single track purchases last year Google has now introduced the Google Play Music Unlimited in India. Unlike the previously launched Music Store service the Unlimited lets you stream music, radio stations and also download songs for offline listening much like the Apple Music. Google offers a similar service in the U.S priced at $9.99/month, however, in India Google has decided to charge just Rs 89 for the same.

This makes the Google Play Music one of the most affordable streaming services in India, Apple music is currently priced at Rs 120 while the other players including Gaana and Saavn are priced at Rs 99/month. Since the cost difference is very less, it’s mostly the catalog, features and the content that will help users in deciding the best streaming service for them. 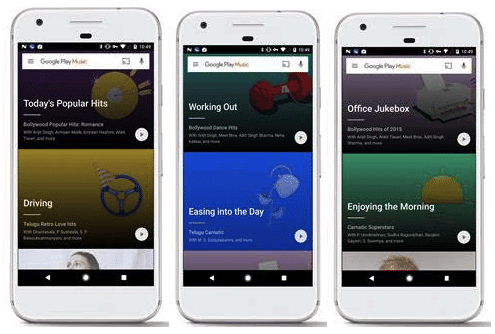 The Google Play Music Unlimited is free for the first 30-days post which the amount would be charged on the recurring basis to your card. Google has further leveraged the Machine learning, location and activity data in order to come up with a playlist that’s most relevant to you. For instance, if you are driving to work the Google Play Music will automatically suggest you a playlist that suits.

Google also blends in the free cloud storage that will let users upload their own tracks and stream them along with the other tracks in the library. This way you will be able to listen to songs from artists who are yet to join the Google platform. What’s missing, however, is the podcast section which is available for the US. Also, the suggestions seemed to be based more on the popularity of the songs rather than my own preferences, perhaps something that Google will fix in the future updates. Yet another advantage of using the Google Play Music is that you no more need to install the app for other streaming services including Apple Music and Gaana. If you want to sign up for the service you can do so by heading over to this link or directly signing up from your Google Play app.