It is the era of photographic murder – rare is the place where you don’t see people shooting. With cameras, that is. Small wonder that a number of manufacturers are pushing devices based on camera muscle, and app developers are coming out with apps that are targeted to make your selfies look nothing like yourself. It is territory into which Microsoft (aye the Big M from Redmond itself) has ventured into the past – it made Selfie and the rather charming What Dog, remember? 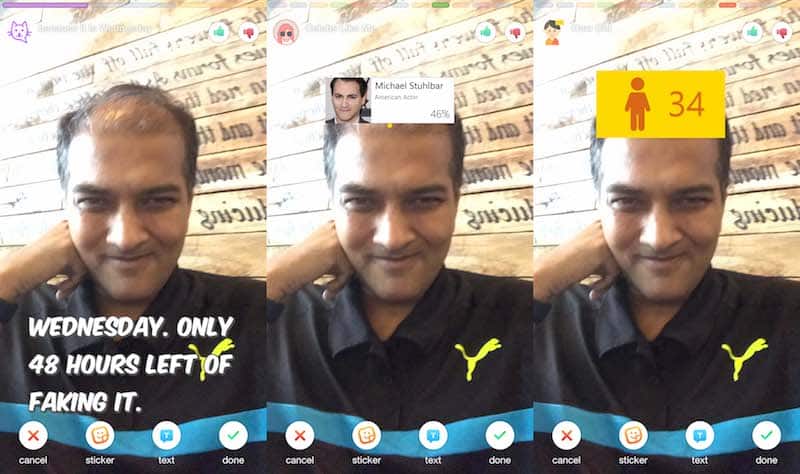 And now Microsoft seems got itself back into Selfiestan (thank you for that term, Gionee – really!) with another new app that seems targeted at the selfie-snapping crowd – Sprinkles (or “Sprinkles – Camera With Fun Ideas,” to give it its full designation), which is currently iOS-only. Yes, we said “seems” because Microsoft itself has not said that the app is meant for just selfies but in the age of Snapchat and the like, we see this being very popular in the “go snap yourself” segment.

On the surface (pun intended. Hey, this IS Microsoft, right?), Sprinkles does seem like another Snapchat clone, letting you add stickers, text, and emojis to your pictures. But wait, there is a twist. And it is not just in the options that you get in this regard, which are kind of okay but nothing path breaking.

No, the twist here comes from what Microsoft claims is a mix of machine learning and AI. The app seems to have taken a page or two from some of Microsoft’s projects like How-Old and Celebs Like Me, and the result is that Sprinkles not only gives you the option to add captions and stickers but also tries to do so itself. So when you take a selfie, the app will try and pull out content based on what it “sees” – it will react to the day, your similarity to celebrities, your age and so on. Of course, it needs a working Internet connection to get this done – this ain’t an offline app, sorry. You can swipe between different options and captions and stickers and share and/or save the ones you like.

So you take a photograph and you get captions and add-ons on it without having to do anything at all. Sounds kind of cool, right? Well, it is. And it is surprisingly addictive. No, we are not saying that you will share the images of your mug pasted over Justin Bieber’s body or placed in an Iron Man suit or whichever celeb the app thinks you resemble. But we do think you will keep coming back for more, just to see how the app’s take on you changes. To its credit, it remains consistent enough – after a while, I knew what celebs I would be compared with and by how much its age prediction was likely to err and on which side. 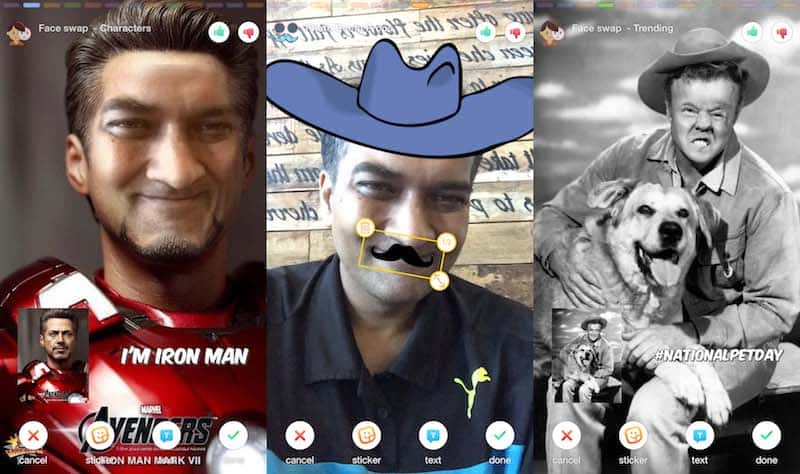 Which is when one can take it beyond oneself. After all, the app can pretty much “react” to any person’s photograph. And this is where the fun really starts – we put in images of the US President and while the app did identify him, the captions continued to be crazy and yes, he too was subjected to the “put the face on another person’s body” treatment by the app. The results were amusing, to say the least. Which is where we think a lot of people will be using this app. Not just for what it does in the world of Selfies (we will not say “Selfiestan” again…whoops!) but also in the world of normal images. The app even helpfully tells you why it has suggested a caption – because of the day because it saw a face and so on.

No, it is not perfect. It does require a brisk Internet connection for best results, and we cannot see those chasing just flower crowns and puppy faces liking it. But we think it is definitely worth a download to find out what a picture tells a phone’s camera!

Was this article helpful?
YesNo
TechPP is supported by our audience. We may earn affiliate commissions from buying links on this site.
Read Next
10 Ways to Fix Photos App Not Working in Windows 11 [2022]
#app review #microsoft #Sparkles