Casio has launched its Pro Trek Smart WSD-F20 smartwatch in the US. It is now available for sale in the country at a price of $499 (Rs 32,000 approx.) The latest smartwatch from the leading watchmaker was initially unveiled at the CES 2017 and runs on Android Wear 2.0.

The rugged smartwatch comes with a 1.32-inch dual layer display. This display especially comes in handy while navigating to a place using the built-in GPS. The feature would especially be useful for bikers and hikers. It also worth noting that the maps can also be used offline. Apart from the display, the Casio Pro Trek Smart WSD-F20 smartwatch comes with a 512MB RAM and 4GB of onboard memory. It goes without saying that the watch comes with a MIL-STD-810G dust and waterproofing certification of upto 50metres. So you can always use this watch for diving. 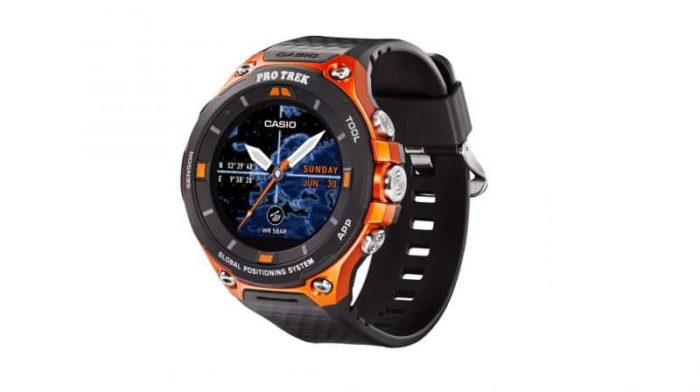 Casio claims that the battery inside its Pro Trek Smart WSD-F20 smartwatch can last up to two days on a single charge. The watchmaker has also included a monochrome lower power saving mode for its display to save some juice when needed.

The Casio Pro Trek Smart WSD-F20 comes in two color variants namely black and orange. It is available for sale via Amazon and a few other retailers in US. Apart from this Casio, also introduced a limited edition version of the smartwatch with a model no WSD-F20S recently. The company had stated that only 500 units of the smartwatch would be produced. A release date and price tag of the watch however, isn’t known till date.

TechPP is supported by our audience. We may earn affiliate commissions from buying links on this site.
Read Next
New Wear OS Features: Google, Fitbit and Samsung Join Forces for this Update
#Android Wear 2.0 #Casio #Smartwatches #wearables