These days, smartphones are increasingly becoming bigger and the bezels are getting narrower. However, a Shanghai-based startup called Unihertz plans to do something slightly different. Going against the trend, the company has designed a super compact prototype smartphone called Jelly. The smartphone is currently on campaigning on Kickstarter and has exceeded its funding goal by leaps and bounds.

The Jelly comes with an ultra-small 2.4-inch display with a resolution of 240 x 432px. As you can already imagine, the smartphone would appear rather puny when placed side by side with the Samsung Galaxy S8+. It will surely remind users of those feature phones days where phones came with such small panels. Needless to say that the Jelly would be the smallest 4G enabled smartphone when launched commercially in the coming few months.

With that said, the engineers at Unihertz included thick bezels all around the 2.4-inch display of Jelly. The bezels are especially noticeable on the top and the bottom corners of the smartphone. It, however, wouldn’t be just to blame the engineers for such a bulky design with thick black bezels. Apparently, it’s quite hard to fit the motherboard, charging board, battery and camera sensors all within such a compact form factor.

Internally, Unihertz will be making two different variants of the Jelly smartphone. These include a Standard and Pro variant. Both the variants are powered by a 1.1GHz quad-core processor. The RAM and the internal memory are however slightly different in the case of the two models. While the standard variant of Jelly comes with 1GB RAM and 8GB ROM, the Pro variant features just double of the same. That aside, the optics department are manned by an 8MP rear and 2MP front-facing shooters. Incidentally, the Jelly smartphone is powered by a small 950mAh battery. It runs on Android Nougat 7.0. 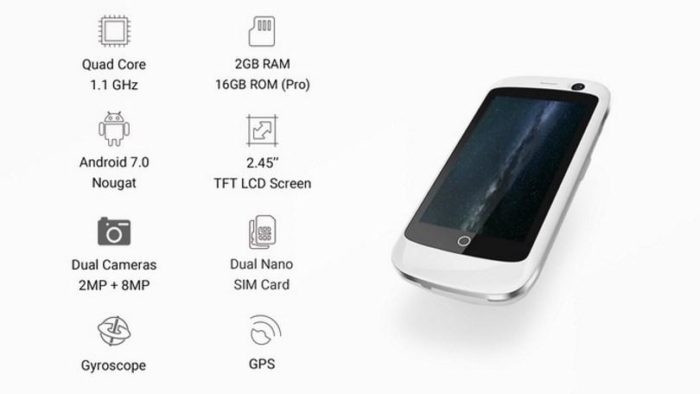 Unihertz doesn’t aim to compete with biggies like Apple and Samsung with the Jelly. Rather, it plans to curve a niche of its own. The ultra-compact smartphone wants to become your secondary device. A device you can use for making calls, checking mails and messages on the go. And you needn’t be worried about dropping the phone and breaking the glass, as Jelly would cost you just $59 for the standard variant. The Shanghai-based firm behind Jelly will also be making an armband for tucking the phone in during workouts.

TechPP is supported by our audience. We may earn affiliate commissions from buying links on this site.
Read Next
Wear Graphene Gamma: One Jacket to Rule Them All
#Jelly #Kickstarter