Google Home has been picking up new skills every now and then. Recently, Google took it to the next level after adding support for multiple accounts. With this feature, users will be able to access the information relevant to their Google account. At the ongoing I/O Google has further bettered the Google Home offering by adding new features. 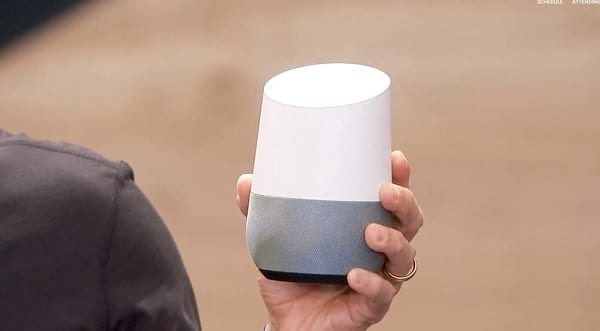 Google Home now comes with a proactive assistant, yes the assistant now scores better when it comes to being contextual. For instance, if you are still having lunch while you should have actually hit the road for the movie Google Home reminds you to get going. The device takes into account the route that you usually prefers along with the prevailing traffic conditions. This can extend to other use cases as well, like reminding you to charge your phone before heading out of the home.

The major new feature that the Google Home gets is the hands-free calling features. Users from Canada and the U.S can just use the voice command to call people. Even this feature is contextual and if you say “Call my Mom” the device calls your mom, and if your Wife uses the same phrase, the Assistant will call her mom. The other end will see a private number by default and users can also tag their number for identification.

Google has told that it would be rolling out the handsfree feature in the upcoming months and in the initial phase, only the outgoing calls will be supported. Amazon has already been in the fray for not letting users block certain callers along with a bunch of other privacy issues including the ability to record calls and send text messages to both your Echo and Alexa app. The Alexa even allowed the callers blocked on phone to reach via the Echo. You can also display search results and online streaming content by asking Google to cast it on the TV via the Chromecast. Users can also get visual responses by querying stuff and connecting the Home with Chromecast.

You Can Now Install Google Recorder with Live Transcribe on…
Can a VPN Make Your Internet Connection Faster?
Handing your phone to a friend? Make sure they can use only…
Mi TV 4A Horizon Edition with 20W Speakers and Android TV…
Best Portable Bluetooth Speakers to Buy in 2022
[Review] Alexa, Should I Order the New Echo Speakers?…