A majority of smartphone users now use some mapping services to navigate between places in their day to day lives. Sadly, these mapping services are limited to outdoor navigation only. This means you basically navigate to the nearest museum in an entirely unknown city but you may be seemingly lost once you enter the same. Microsoft Path Guide is the latest app from the Redmond giant that aims to address the issue of indoor navigation somewhat. 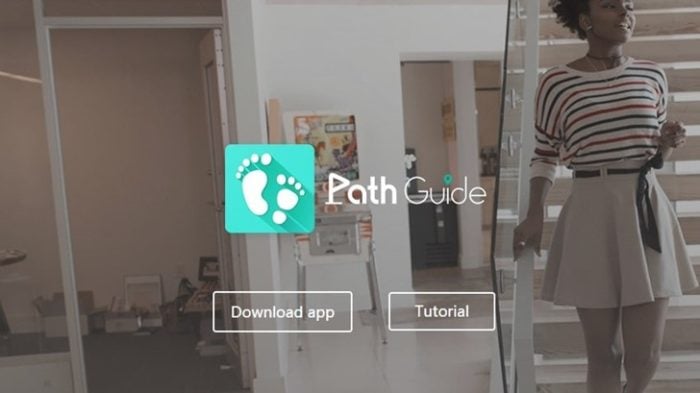 Why Indoor Mapping is so essential?

One might argue, why would we need an indoor navigation system to guide us in public places in the first place? It’s true that most public places have an indoor map of the same at the entry, but that’s often confusing. In most occasions, you would need to click a picture of the map, and then use you own positioning ideas to move around. And that isn’t really convenient. 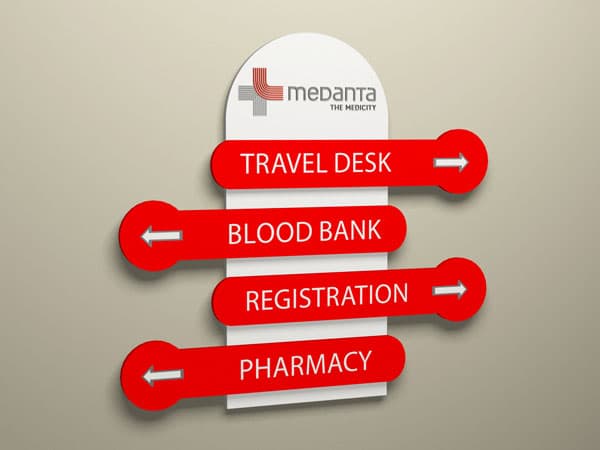 More often than not, in a foreign city, visitors face the issue of reading direction boards due to the language problem. Thus, you are completely lost in a public place like malls, parking places, museums, etc. that too in a foreign city. How worse could it get? So here’s where Microsoft’s latest Path Guide wants to step in by providing you with turn by turn navigation of an indoor place, just like other mapping services like Google Maps, Here Maps does in the outdoor environment.

Is Microsoft the first tech giant to foray into Indoor Maps?

Google had apparently debuted its indoor mapping feature back in 2012. It now lists indoor floor plans of various public places spread across hundreds of cities worldwide. While this feature is indeed useful in ascertaining the numbered floor of a building and different shops in a mall, but that’s all. It isn’t of much use beyond the same as it fails to deliver turn by turn direction within the public place. That said, the fact that the feature is built into a highly popular outdoor mapping solutions like Google Maps is a boon in disguise. Otherwise, I really doubt how many people would have at all been aware of such a feature. 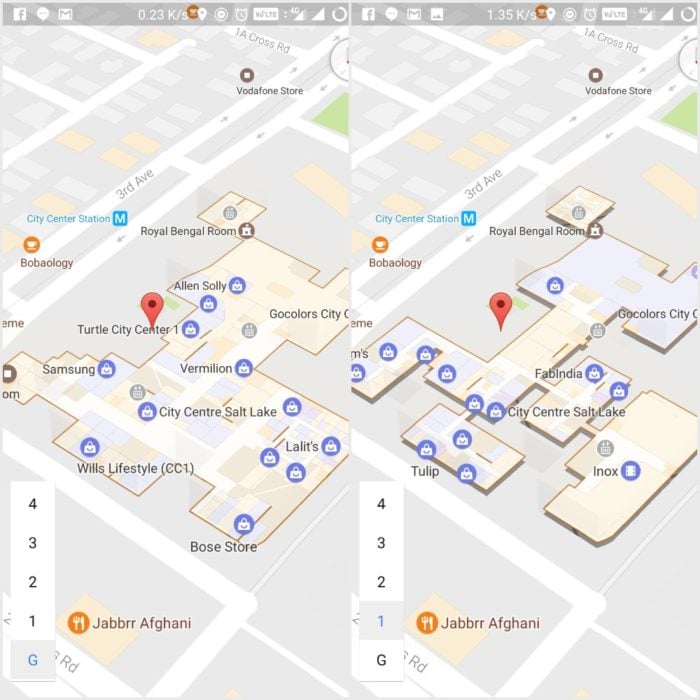 How does Microsoft Path Guide aim to create an Indoor Map database?

Mapping indoor spaces is always a major challenge. Unlike outdoor maps, Microsoft can’t really make use of satellite data to map the place. Besides, it’s not feasible for the officials of Microsoft to visit every public place and map them. So, the only solution they are left with is crowdsourcing of data. The approach is similar to what Waze does to gather traffic related information from various parts of the city. Thus, whenever a user with Microsoft Path Guide app visits a nearest public space and records turn by turn directions, it will be uploaded directly to the app’s online database.

What are the challenges Microsoft Path Guide would face?

The foremost challenge for Microsoft would be to make the app popular enough that a large number of people are using it on a daily basis. Google to relies on such crowdsourcing for correcting various information on its Maps, especially for marking one-way roads, locating small scale shops, restaurants, etc. That said, it worth noting that Google Maps is installed in over 1 billion Android devices.

To register your movements at a public space, simply open the Microsoft Path Guide app and click on Recording mode one that says ‘Take your friends somewhere’. It instantly triggers open your camera and makes use of various built-in phone sensors including Proximity, Accelerometer, Gyroscope to record your movements. It’s worth noting that the turn by turn recording would be more accurate if you have a barometer sensor in your phone. 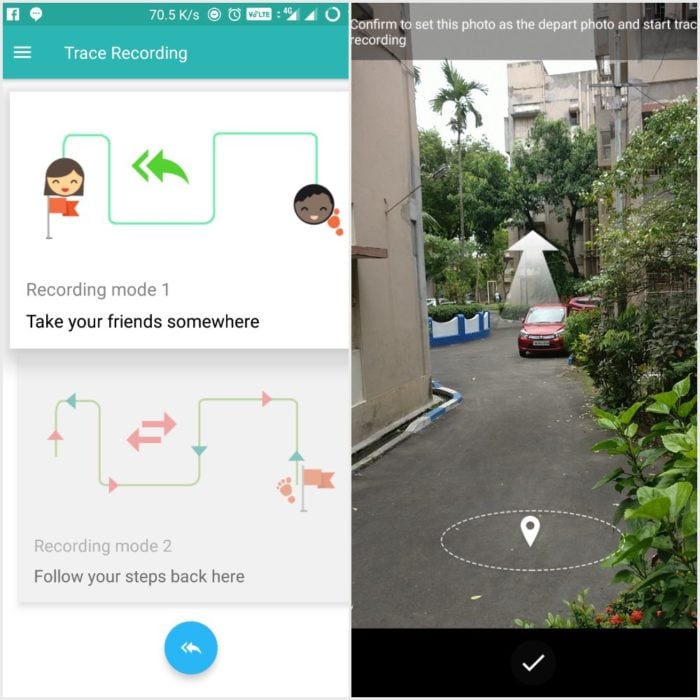 This, apparently, helps to record your movement while climbing the stairs. Once you are done with your recording, a trace sharing option comes up which confirms whether you want to share the trace publicly. Just in case you want to do so, it would ask you a set of questions regarding the place of the trace. This includes city, building address, start location and destination. Besides, you have the option to send the trace to one of your friends to help him guide to a particular place. 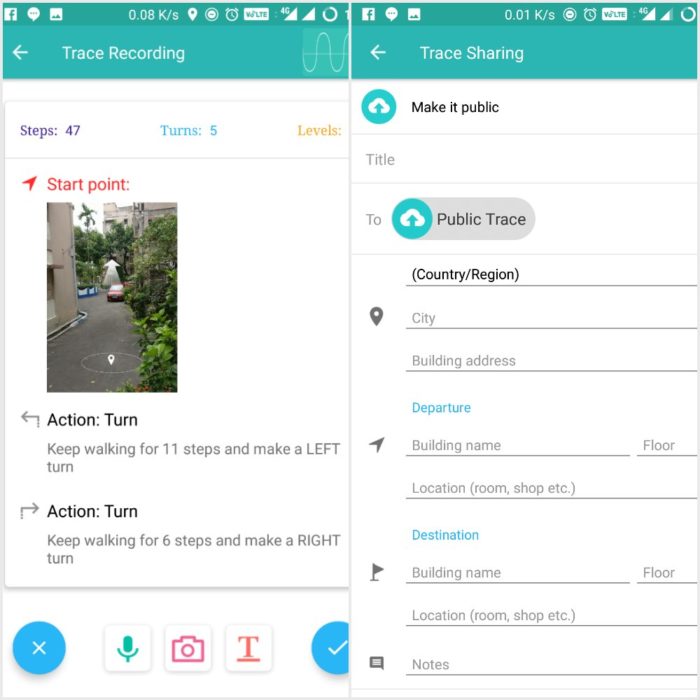 What are some use cases of Microsoft Path Guide app?

The Microsoft Path Guide app is still in its infancy with hardly any indoor navigation data available. However, once the service gains popularity we would get to see a large number of use cases for the app. Some of them are listed below:

To make a feature like indoor mapping popular, Microsoft needs to integrate it with an already popular mapping service. Otherwise, it’s very unlikely for the masses to use this app on a daily basis. Integrating it with a map would make the experience much more seamless. This means you can basically navigate from your home to the nearest mall, and as soon as you reach your destination, an indoor map of the place crops up.

How Google’s Project Tango can have an impact on Indoor Maps?

Google Project Tango will play a vital role in developing traces like these, and we might eventually see the MountainView based tech giant roll out a similar app like this. Here’s a video that shows how Google envisions to improve its indoor navigation feature with its latest Project Tango. For the uninitiated, we already have a Project Tango phone in the market in the form of the Lenovo Phab 2 Pro.