Apple has finally updated its iMac lineup after a period of two years. The whole new Apple iMac 2017 lineup comes with the latest Intel processors and a markedly improved graphics department. Needless to say, that these new iMacs would run on the latest Mac OS High Sierra.

The most visually striking update in the new iMac lineup is in their displays. The latest Mac OS powered desktops now boast displays with one billion colors and a peak brightness of 500 nits. Apple claims that its new iMac range has a 43% brighter display than its predecessor. The new Apple iMac 2017 lineup consists of a total of three models. These include the base iMac 21.5 inch, iMac Retina 4K 21.5 inch and a top of the line iMac Retina 5K 27 inches. On the inside, all of the new iMacs including the 21.5 inch and 27-inch models come with 7th gen Intel Core Kaby Lake processors, which boasts of a higher base and turbo frequencies. Besides Apple has now incorporated support for 10 bit HVEC decode on its latest hardware.

The Kaby Lake processors on the iMacs are clubbed with up to 32GB RAM on the 21.5 inch and 64GB on the 27-inch model. The spec boost can be seen in the storage department too. All variants of the 27 inch iMac now feature Apple own Fusion Drive with up to 50% faster SSDs. This when clubbed with the new APFS file system of Mac OS High Sierra, is expected to result in major operating differences for memory intensive processes in real world performance. The maximum storage capacity of the iMac is capped at 2TB.

Apple bumped up the graphics prowess of the iMac range. The standard Apple iMac 21.5 inch now comes with Intel Iris Plus Graphics 640 with 64GB MB eDRAM. The Retina 4K 21.5 inch iMac variant, on the other hand, features up to 4GB of either Radeon Pro 555 or Radeon 560 depending upon the configuration. Finally, the top end iMac Retina 5K 27 inch packs up to 8GB of Radeon 570, 575 and 580.

Connectivity wise the Apple iMacs would come with two USB Type-C connectors with Thunderbolt 3. Apart from that, the chunky graphics hardware behind the iMacs indefinitely makes them great for VR content creation 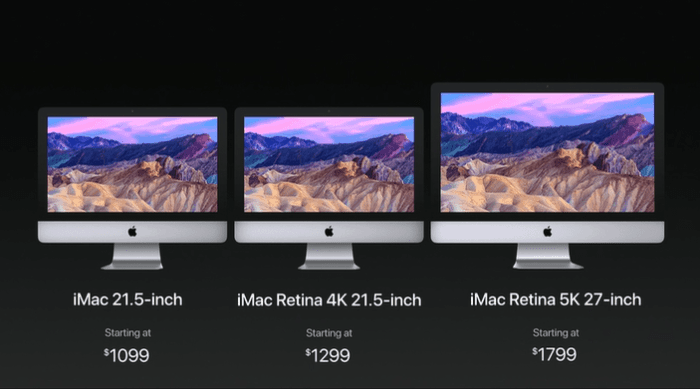