Lenovo has been prepping a foldable Android Tablet and this time around Lenovo is showing off its latest innovation at the Lenovo Tech World. The company has been experimenting with form factor from quiet some time, and the Yoga series is one of the best known Lenovo lineups. The new Android Laptop shown by Lenovo folds outwards instead of inwards, and then the screen is left visible at the edge. In fact, the edge displays information like in the Galaxy Note Edge. 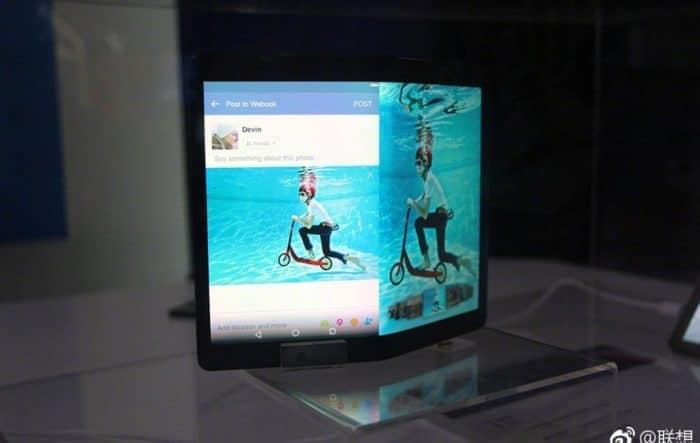 The primary use case that I can see is a tablet that can be folded into a smartphone or vice versa. In any case, if one needs to use a larger display they can simply unfurl the smartphone to reveal a larger display. That being said the display still doesn’t fold completely flat and one can see the ridge formation on the display where the bend takes place. Whats drool worthy is the back of the smartphone, that will double as a camera mirror when folded.

That being said, the Lenovo Prototype is still being powered by dated hardware. The Tablet runs on Qualcomm Snapdragon 800, and the screen resolution is 1920×1440. The display size is 5.5-inch when folded, and in tablet mode, the display size goes up all the way to 7.8-inches. The tablet is running on the Android 7.0, and the product looks unfinished. While we have been witnessing a handful of foldable display exhibits none of them have actually made it to mass production. The closest that one could get was the Galaxy Round and the G Flex Bend (both Curved Displays but not foldable).

TechPP is supported by our audience. We may earn affiliate commissions from buying links on this site.
Read Next
Lenovo Legion 5i Pro Review: Legion Or Legend?
#Foldable display #lenovo