Saying "I love you" the Live Message way

There has been a flurry of advertising in the tech world of late, with multiple high-profile product launches. So much so that we have been unable to write this column as often as we would like to (apologies for that, we are going to be more regular henceforth). A lot of it has stuck to the conventional spec readout or focusing on a celebrity handling the device. Some, however, have managed to rise above this routine and one of these is Samsung with its latest Galaxy Note 8 ad. Yes, we know the Korean major came out with a massive three minute official, all-encompassing ad for its latest super phablet, but it has subsequently come out with shorter ads that highlight specific features of what is perhaps the most well-endowed phone out there.

The latest ad from the Sammy stable focuses on the Live Messaging feature of the Galaxy Note 8. Basically, this is sending an animated message, complete with pictures and animations and special effects, in best Samsung style.

The power of messaging!

Well, the one-minute ad shows you just how powerful this feature can be. In terms of presentation, it reminded us a little of Apple’s The City ad which had highlighted its portrait mode – the couple shown are Asian (Chinese perhaps), and the production values are excellent, and the music muted rather than loud. The tone of the ad is a very gentle one – there is nothing that jumps out at you. It is a story of a relationship that develops via words and pictures sent by the couple to each other using Live Message. 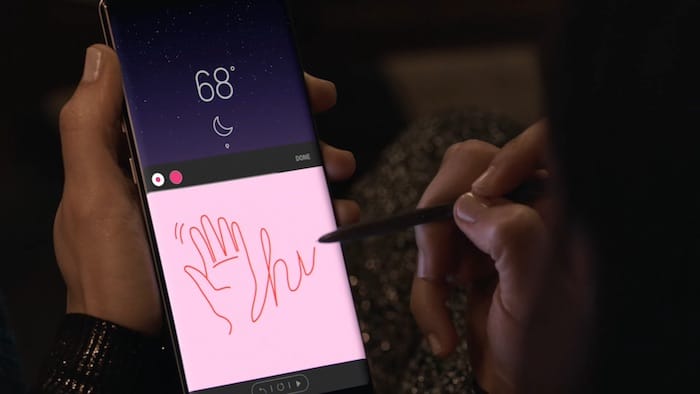 It starts with the girl pulling out the S-Pen from her Galaxy Note 8 and sending a ‘Hi!’ with a waving hand to a man sitting across the room at what seems to be a pub or a party. He receives the message and smiles. At which the girl indicates that he should come and sit next to her. This acquaintance blossoms into a friendship, with each sending messages to the other, whether it is by adding special effects to photographs or sketching on images. The messages keep going back and forth between the two of them, and then…as she travels in a cab, the girl realizes something. She pauses, thinks, and then slowly writes “I think I love you…”, smiles and seems to wonder whether to send it and then hits the ‘Send’ button. The response is almost immediate: “Who dis?” As the girl frowns in worry and alarm, another message comes in. It is the one she had just sent, but with a “too” added to it at the end. The girl leans back in her seat and laughs. And the message flashes across the screen: “Galaxy Note 8. With Live Message. Do bigger things.

Great concept, but did they need messages ALL the time? 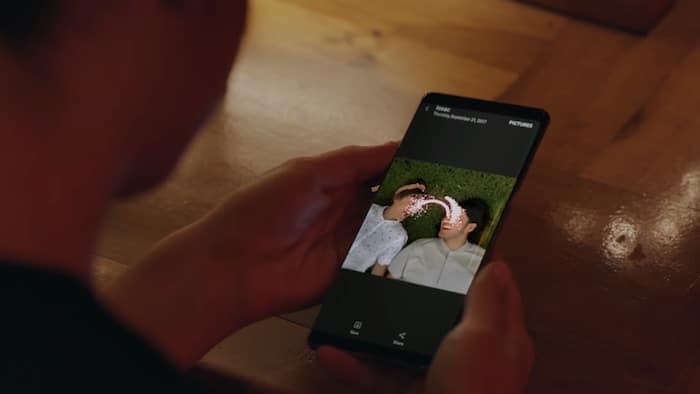 Our first reaction on seeing the ad was to smile gently and go “awww…” After all, everyone likes to see a love story that has a happy ending (well, or at least a start as the ad ends with both conceding to feeling the tender sentiment). It also fits in with Samsung’s recently adopted quiet and classy style of advertising on the international level, where the messaging is conveyed subtly than by an overdose of effects and noise. Production values are excellent, and the two characters seem accessible rather than out of some tech fairy tale. Hooray, no celebs either, letting Live Message be the star. 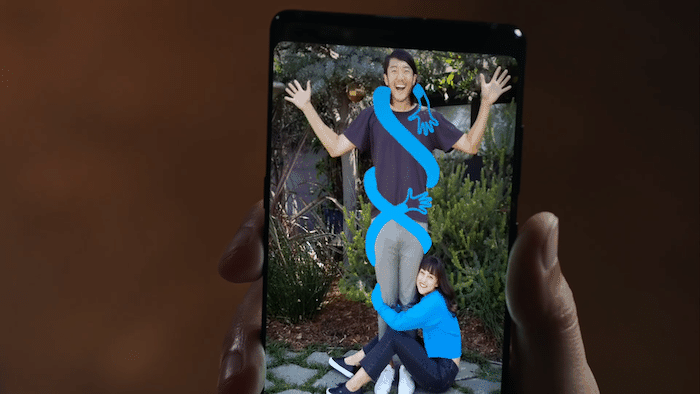 But…there is a ‘but.’ What struck us as being a bit unusual was that the two characters were often in close proximity to each other. The girl actually had to MESSAGE a person who was sitting a few feet away from her. And the fact that the two had a fair number of pictures together indicates they kept meeting…now while that does not lessen the importance of their messages, it does seem to indicate a slightly odd relationship. Perhaps, perhaps, it would have been better if they had met just that once and then the entire romance had unfolded over messaging, rather than being a blend of meeting and messaging. Speaking of which, we also think that more aspects of Live Message could have been highlighted apart from the write, sketch and scribble on images features. We received our Note 8 unit a few days ago, and its versatility is astounding. 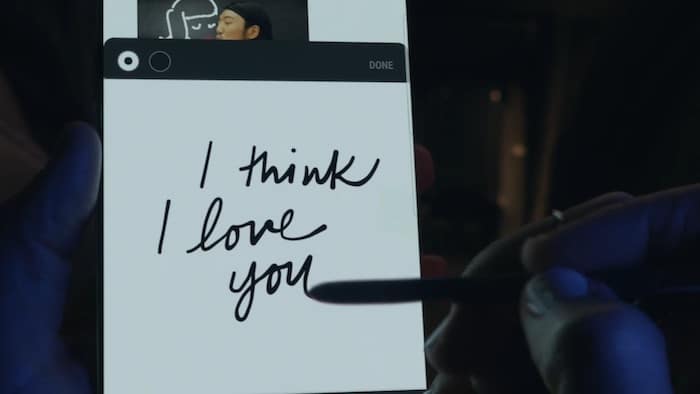 But all said and done; we must admit we like the “I love you” approach of the Samsung Galaxy Note 8. There is storytelling, and great production and the message does get through. Sociologists might frown and say it shows how phones are making us lose “real communication skills” but we can see geeks smiling. Just like the girl did. And that is never a bad ad thing.