There is no second-guessing the fact that dual cameras are “the” thing in the smartphone world right now – the trending feature that every company is adding to its devices. The high-end phones, the mid-range ones and now even the budget phones have this optical couple on the back, and some even on the front. So much, so that phones with single sensors are often treated as something close to criminal now, even in the mid-range segment. And it is in this super competitive segment of the market that two of the biggest players clash: Xiaomi and Moto. Both have a super strong presence, and devices from both sell like hotcakes on a January morning. And with the Mi A1 and Moto G5s Plus, they both have dual camera devices in the mid-segment. Yes, we will be comparing both devices as a whole too (stay tuned), but given the hype over their cameras, we figured that even the cameras deserved a separate battleground all to themselves. So which one came out on top, and reduced the other to just some bokeh background? Read on. 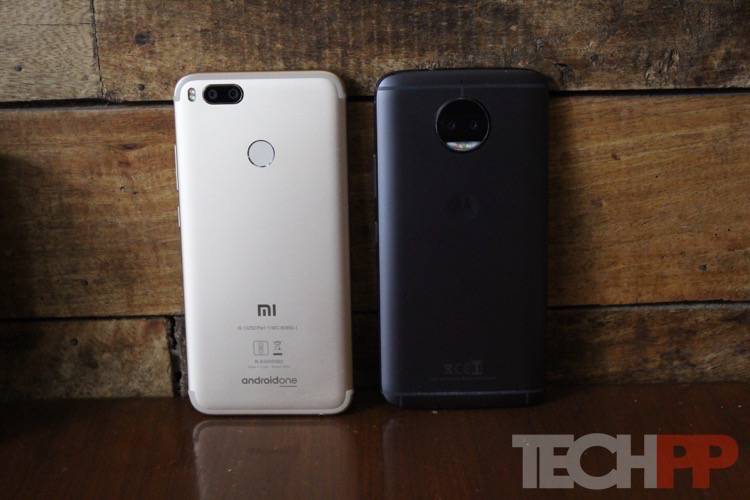 Both the smartphones come with dual back cameras, and dual LED flashes but the combination of sensors that the two have are completely different. The Xiaomi A1 comes with a 12-megapixel + 12-megapixel RGB plus telephoto sensor, that offers you 2X optical zoom while the Moto G5s Plus features a 13-megapixel + 13-megapixel RBG plus monochrome sensor, which claims to offer better details and color. The camera combination on the MI A1 has slightly smaller apertures (f/2.0 and f/2.6 for the telephoto) and compared to the f/2.0 on the dual snappers on the Moto. In terms of selfie cameras too, the G5s Plus has the edge, with an 8.0-megapixel snapper with a flash while the one on the Mi A1 is a 5.0-megapixel one. Regarding sheer hardware specs, we think that the force is with the Moto G5s Plus here, as both devices are powered by similar chipsets (Qualcomm Snapdragon 625) and come with 4GB RAM/ 64 GB storage combinations. 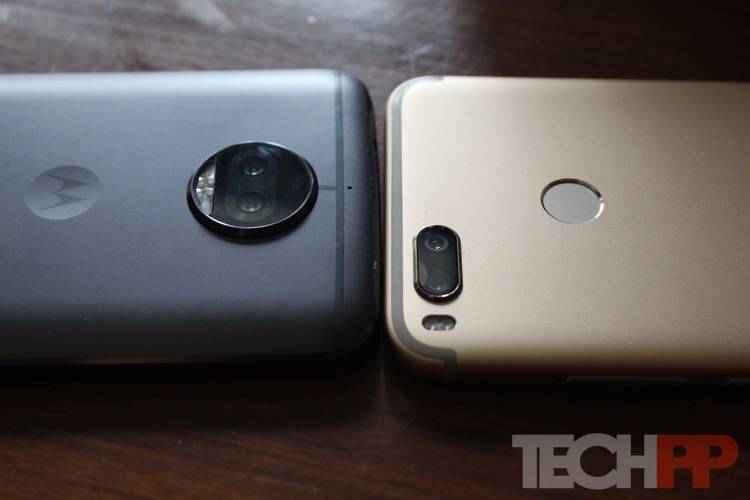 In the past, Moto has been known to offer a stock Android experience while Xiaomi has been known for its MIUI interface. But the story is a little different in this case. This time Xiaomi A1 comes as part of the Android One initiative, offering pure stock Android (at least this is what they say). On the surface that would seem to level out the playing field, but if you thought things were going to be pretty simple, they, in fact, are not. For both companies have played around with their camera apps, allegedly because the stock Android camera as of now (both run on Nougat) does not have features for dual cameras!

While the Xiaomi A1 mostly comes with stock Android, the camera is where the company has stepped away from pure Android, and we would not be wrong if we told you that opening up the camera app on the Xiaomi A1 pretty much takes us back to MIUI. The base has the gallery icon, the shutter button and the video/photo switch icon from left to right. Just above it is the icon for different modes that offer more than ten modes (effects) including Color Pop, Rustic, Black And White amongst others, and right next to it is the Option button that takes you to the Option menu which has nine different shooting options including Panorama, Tilt-Shift, Group Selfies, and Manual. Right by its side is the camera switch option that lets you switch between the selfie camera and primary camera. On the northern end, we have the flash icon, the stereo (portrait) mode, and the HDR mode. The interface offers a number of different shooting options, and this obviously allows you to play more with the camera.

Moto has also tweaked the camera app for the Moto G5s Plus, but it comes closer to the stock Android aesthetic – it is minimalistic and does not overwhelm you. The base of the display has the three basic on-screen touch buttons. Above them, you have the camera switch icon that will let you switch from primary camera to secondary camera, right next to it is the shutter button, then a video/ photograph icon and finally, there is the mode button which has like four modes which are camera, panorama, depth enabled and professional mode (the depth-enabled mode is a special touch, and the phone also has a depth-editor which lets you play around with the background). On top are the HDR icon, the flash icon, the timer and the night mode button. Swiping right will take you to settings while swiping left will take you to the gallery. There is actually nothing outstanding about Moto G5s Plus’s camera app but the ones who prefer just point and shooting are going to pretty much love it.

So which works better? We think we like the Xiaomi A1 camera interface more because first you can simply use it as a point and shooter if you wish and second you be all artsy if you want with the options available. And for us, having the option to play with the camera is more important than having no options at all. So with Xiaomi A1, you have the best of both worlds. Stock Android fans and those who prefer simplicity will, however, prefer the Moto G5s Plus. 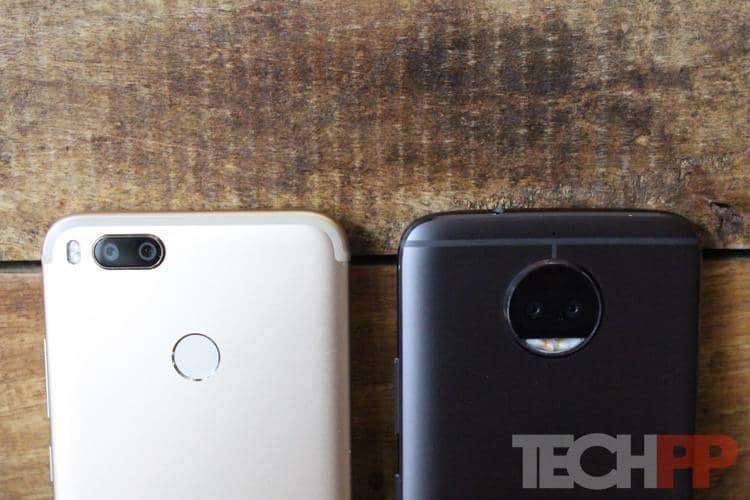 That is about the sensors and software on the two devices. Now to the real test – how they perform. We think both the smartphone cameras had their positives and negatives. We think that the Moto G5s Plus produced pictures with better details while the Xiaomi A1 reproduced better color. While there were no major faults with any of the camera and both are among the best in the price segment (and better than some of their more expensive competitors), there were a few areas where both stumbled. Notably, both the phones had their share of lags and stutters. The Xiaomi A1’s camera took a couple of seconds to launch from the lock screen and had visible lags while processing pictures. The Moto G5s Plus had its share of troubles as well – it took time to click pictures in depth enabled mode.

So which one gets the budget dual camera crown? Well it is a pretty close battle, and both cameras have their positives and negatives – one is good in some departments, while the other is good in others. All said and done; we would prefer the Xiaomi A1 over the Moto G5s Plus- that Stereo mode and the optical zoom does tilt matters in its favor, as does the feature-rich interface, and better color reproduction. But the Moto G5s Plus has its own plus points; it is great with detail, takes better selfies and has a simpler UI, and a far more flexible depth of field feature. The perfect phone camera will have the best of these two phones – two sensors, one monochrome, one RGB (with telephoto), with relatively large f/2.0 apertures, and a UI with plenty of shooting options, even while letting you do more with bokeh. It is a good fight, this. And we are going for the A1, but by a very slim margin indeed. But those opting for a Moto G5s Plus will not have much to regret in the camera department either.

Was this article helpful?
YesNo
TechPP is supported by our audience. We may earn affiliate commissions from buying links on this site.
Read Next
Snapdragon 782G vs Snapdragon 778G Plus: What Has Changed?
#comparison #Dual Camera #Face Off #Moto G5S Plus #Photography #Xiaomi Mi A1