Instagram has grown a lot in the past year. And with that, it’s now hosting way more content than it used to. That is great for the platform itself but this has also caused havoc for its Explore page which has sort of turned into a mess lately. But the photo-sharing service is all set to fix that. Instagram is now rolling out a redesign in beta for the Explore page which segregates photos and videos into various categories. 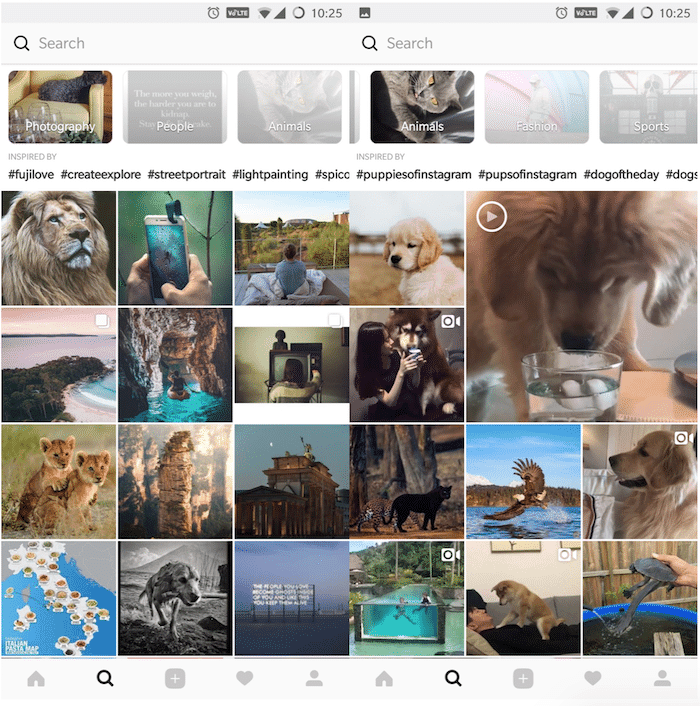 Instead of throwing in everything in a single pile, the Explore page now has genres like photography, animals, fashion, and more. These categories are present as huge tiles in a scrollable row at the top. There’s also a “For You” section which is essentially the old Explore page in a different tab. Below that, there are hashtags which have possibly allowed Instagram to curate this endless list of pictures and videos. However, in my brief time with it, I’ve also found that even though a few posts don’t have any hashtags, they’re accurately present in a specific type.

Therefore, it’s possible Instagram has here applied machine learning as well to further identify the post’s genre. For switching between these, you can either tap on the individual category tile or simply swipe left or right. Other than that, however, the app largely seems the same with no critical changes.

For the uninitiated, the Explore page lets users discover new content and is usually comprised of various algorithms that take into account what’s popular and what your friends have interacted with. Even though this might seem like an insignificant overhaul, it’s actually I feel is pretty important. That is primarily due to the fact that Instagram’s Explore tab was previously in a desperate need of curation. Another reason I think this new layout is in early stages is the lack of the stories carousel which previously used to live where the categories row is.

“The “Explore” tab’s quality continues to degrade every day and is in dire need of a technological refresh as well.”, I had mentioned in one of my articles before. The new update is quite promising. However, it feels a bit of a work in progress right now which it technically is too. That’s mainly because the spacing between the new elements doesn’t look proper. The version I’m running on is 42.0.0.8.95 on Android. It’s available on APKMirror as well if you’d like to sideload. Although, this change could be server-side as the majority of beta users still haven’t received it.

Was this article helpful?
YesNo
TechPP is supported by our audience. We may earn affiliate commissions from buying links on this site.
Read Next
How to Unmute on Instagram: App, Stories, Profile, and More [2022]
#Explore Page #Instagram