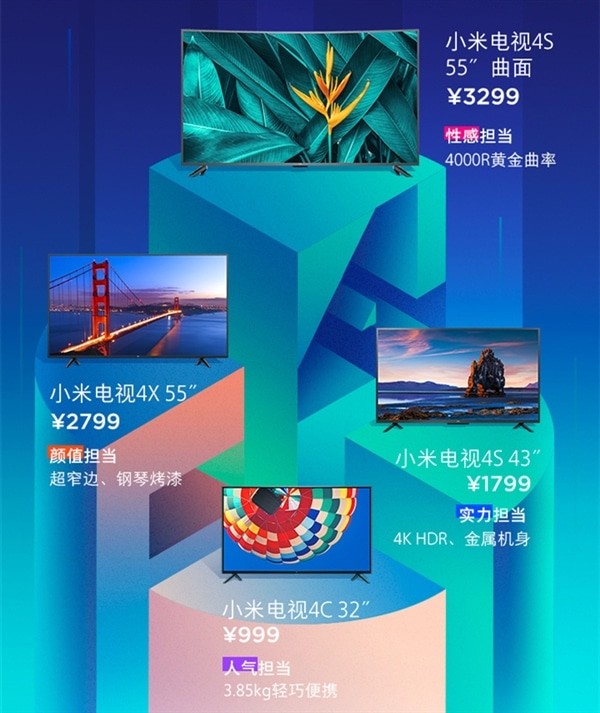 The tip of the line Xiaomi Mi Tv 4X comes with thin bezels and a piano black finish. As expected the Mi TV 4X comes with a 4K HDR display mated to a 64-bit quad core processor and 2GB of RAM. On the storage front, the Xiaomi Mi TV 4X offers 8GB of internal storage. Other features include an 8W speaker and Dolby DTS support. The Mi TV 4X is priced at 2,799 Yuan ($438/Rs 29,900)

The next one is the Xiaomi Mi TV 4S. Unlike the 4X the 4S features a metal finished bezels with a curvature. In other words, this particular variant comes with a 55-inch curved screen. As far as the innards are concerned the Mi TV 4S is once again powered by the 64-bit quad-core processor. On the audio front, the TV offers two 8W speakers. The Xiaomi Mi TV 4S is priced at 3,299 Yuan ($516/Rs 35,241)

The Xiaomi Mi TV 4C is the most affordable out of the lot. The TV features a 32-inch display set at an HD resolution. Storage options include 1GB of RAM and 4GB of internal memory. Despite being a budget offering Xiaomi has been thoughtful enough to add dual 8W speakers and support for DTS. While the booking for all the new Mi TV models has started the TV will go on sale on May 31. We hope Xiaomi soon brings the new Mi TV lineup to the Indian shores.