Honor 7A and 7C Review: A Seven Point Summary

They look like two peas out of a pod, with one perhaps slightly shrunk from spending too much time in the sun. The Honor 7A and 7C are only slightly different in terms of nomenclature, and the same pretty much applies to their design as well as the hardware and software that lies within them. Which is why we decided to step away from our normal procedure and club both devices in a single review. And of course, in keeping with the spirit of seven, we simply decided that it would be best if we summed up the essence of both devices in seven points: 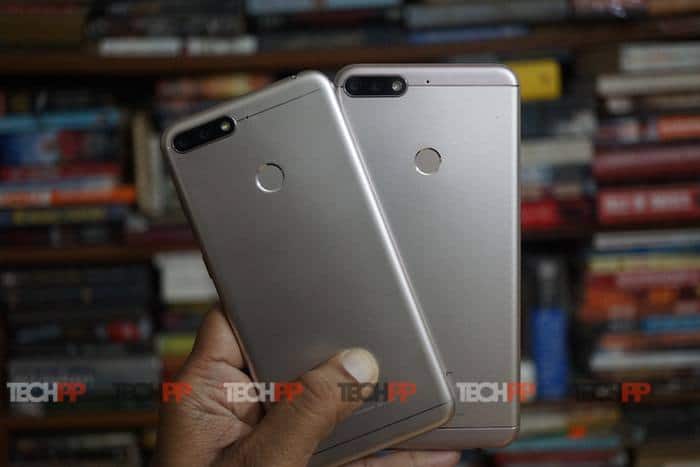 There is no doubting that the Honor 7A and 7C have been designed for function, rather than fashion. No, neither is by any measure an eyesore, but neither will either of them stop traffic or elicit a second glance. Both come with tall 18:9 aspect displays with the same array of sensors and cameras above them, with backs that look metallic with shiny antenna bands at the top and base and horizontally aligned dual cameras, with a circular fingerprint scanner below them. The 7A is the smaller of the two, being 152.4 mm in length as compared to the 158.3 mm of the 7C, and is also slightly less wide (73 mm as against 76 mm). And this is mainly because it has a smaller display – 5.7 inches as compared to 5.99 inches. It also gives the 7A a more compact look, although both have the same 7.8 mm thickness. We also think the 7A is slightly more eye-catching because its sides are shinier as compared to those of the 7C. The only other major difference in terms of design is the fact that the 7A has a 3.5 mm audio jack on the top, while the 7C has it on the base. We had gold versions of both devices, and well, we would say that the 7A would appeal to those who want a smaller, more handy device, while large screen lovers would obviously prefer the 7C. Both devices look smart enough, although neither will really stand out in a crowd. 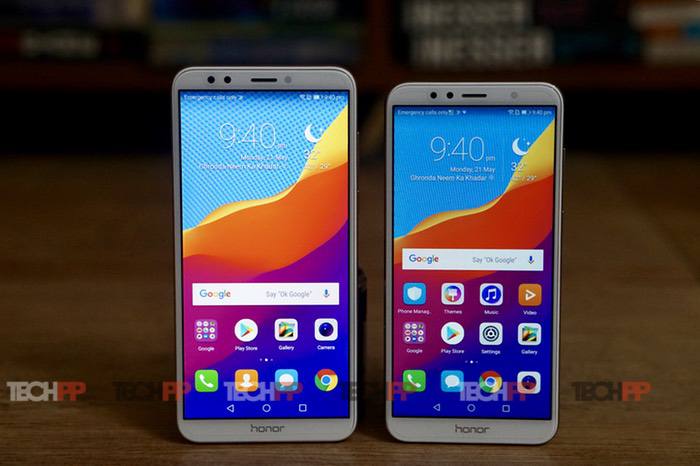 Middling hardware, but those displays rock

Both phones come with remarkably similar hardware, barring a few minor tweaks. The 7C has a bigger 5.99-inch display, but both phones have the same HD+ resolution, which actually means the 7A actually has a slightly higher pixel density. And we would say that the displays are the real stars of the hardware show here – they are among the best we have seen at this price point in terms of brightness and color reproduction. Both phones also come with dual rear cameras of 13 megapixels and 2 megapixels, and a single front camera of 8.0-megapixels. The 7A has a single variant, with 3 GB RAM and 32 GB storage, while the 7C has two – 3 GB/ 32 GB and 4GB/ 64 GB – but both can be expanded using a microSD card slot (for which there is a dedicated slot) by 256 GB. In terms of connectivity, both have 4G, GPS, Wi-Fi, and Bluetooth. Rather interestingly, both have similar 3000 mAh batteries (you would have thought that the 7C would have a slightly larger one, given its larger frame, but no). The most talked about the difference in hardware is perhaps going to be in terms of the processor – the 7A has a Qualcomm Snapdragon 430 processor, while the larger 7C has a Snapdragon 450 one. Hardware lovers will prefer the 7C for that processor, which on paper is supposed to be the superior, but we can see some people liking the slightly richer display of the 7A – those pixels get stretched on a 5.99-inch display. 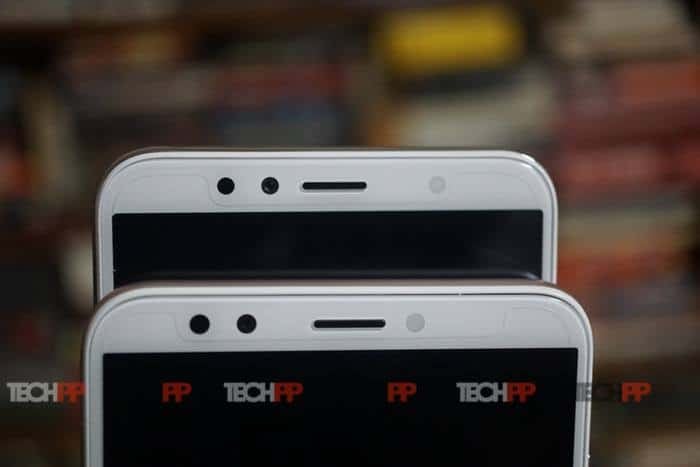 Both devices come with a similar set of cameras and have similar camera apps, but let’s get one thing clear – they do not turn in similar performances. The 7C regularly tuned in shots that had warmer colors and slightly better detail, while the 7A’s snaps seemed just a little washed out. Both are decent good light performers (you will prefer the 7C if you like brighter colors) but neither is likely to set tongues wagging with low light performance – we once again felt that the 7C gave us slightly better colors, but both are noisy in the night, in photographic terms. There are a few shooting modes (panorama, food, live filters and you can also scan documents), but what we really like is the fact that you can play around with the aperture in both, letting you get some serious (if at times supremely artificial looking) bokeh into your shots. The selfie cameras repeat the same story – the 7C’s 8.0-megapixel selfie snapper just seems to handle colors and glare a lot better than its counterpart on the 7A. Honestly, we expected slightly more, given Honor’s reputation in the camera department, but once again, if you consider the price point at which these phones are battling, the results are pretty good. Mind you, the selfie crowd will perhaps be more attracted to the offerings from Mobiistar or Xiaomi.

Note: Click here for full-resolution images of the sample pics below 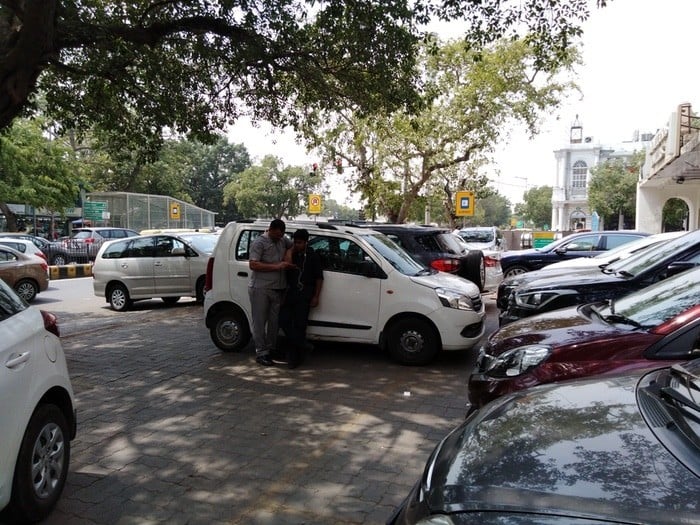 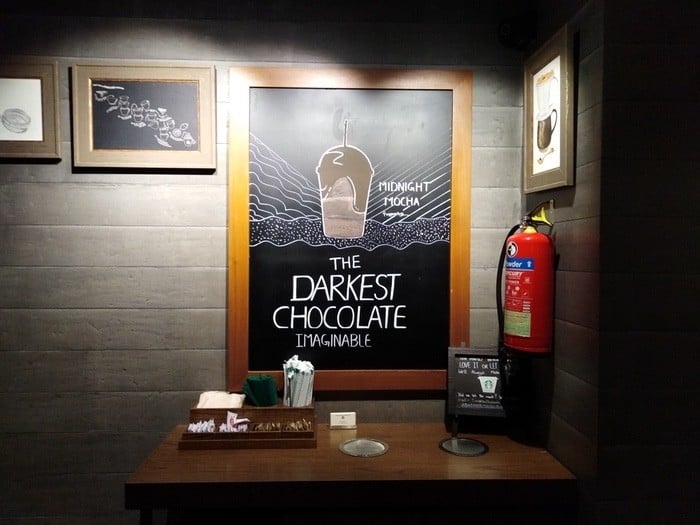 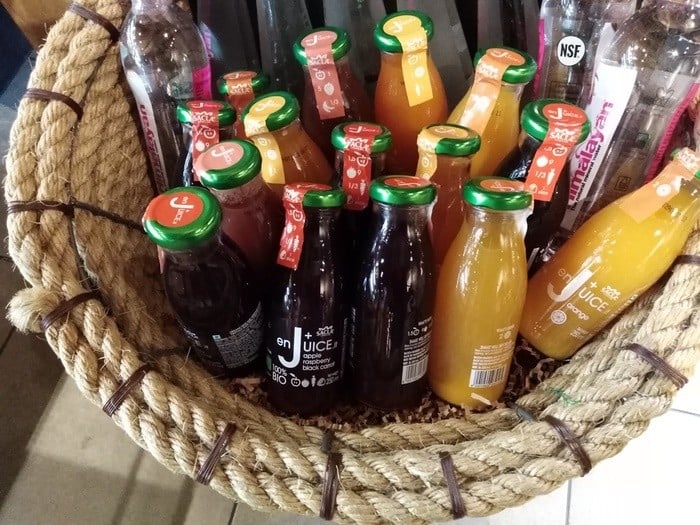 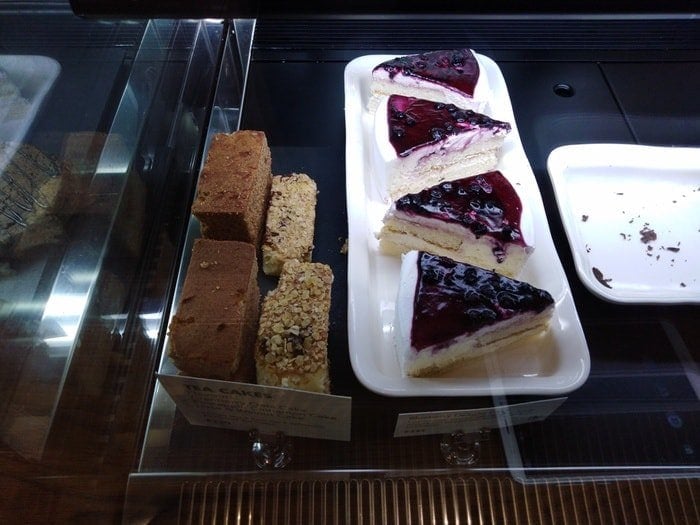 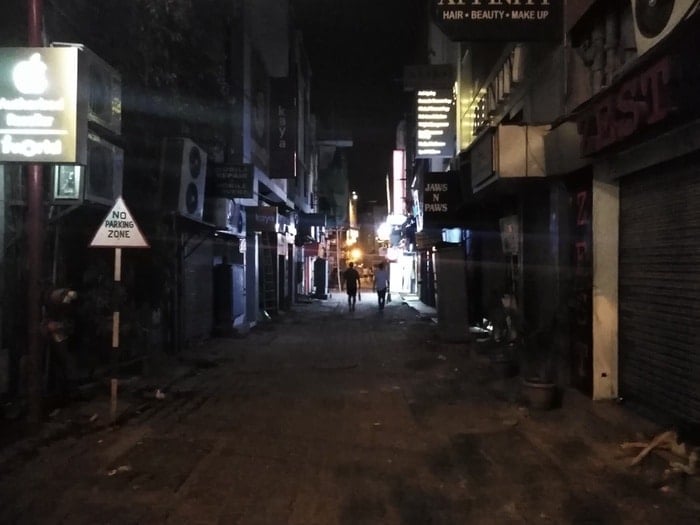 Note: Click here for full-resolution images of the sample pics below 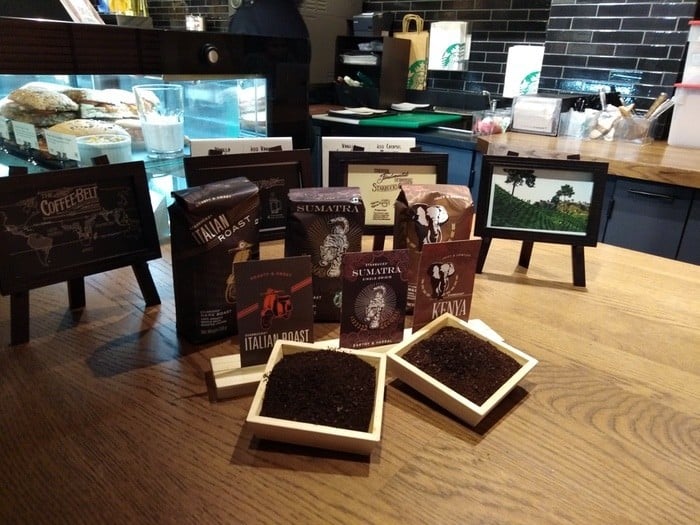 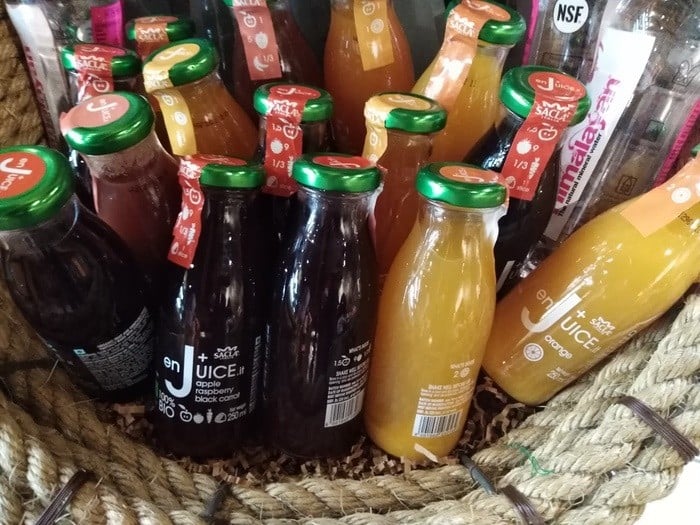 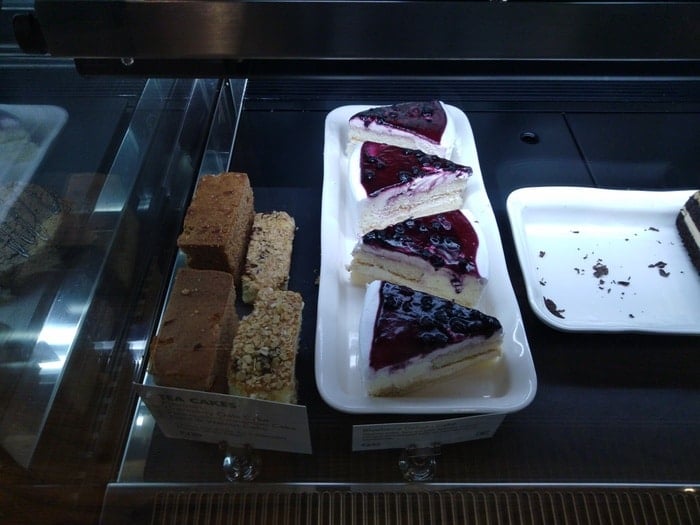 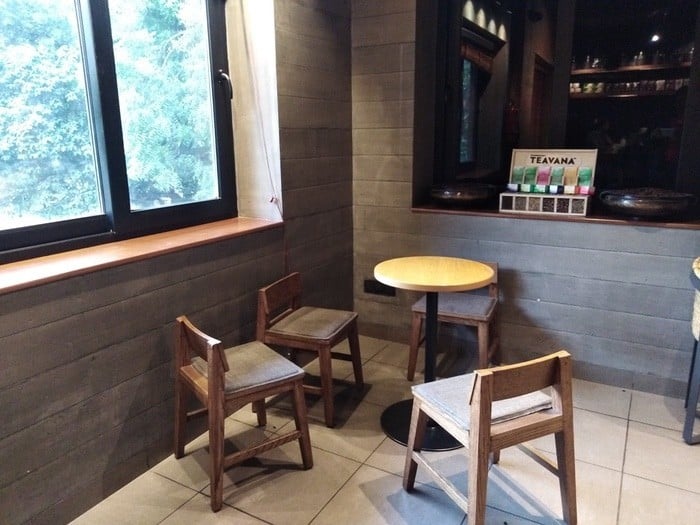 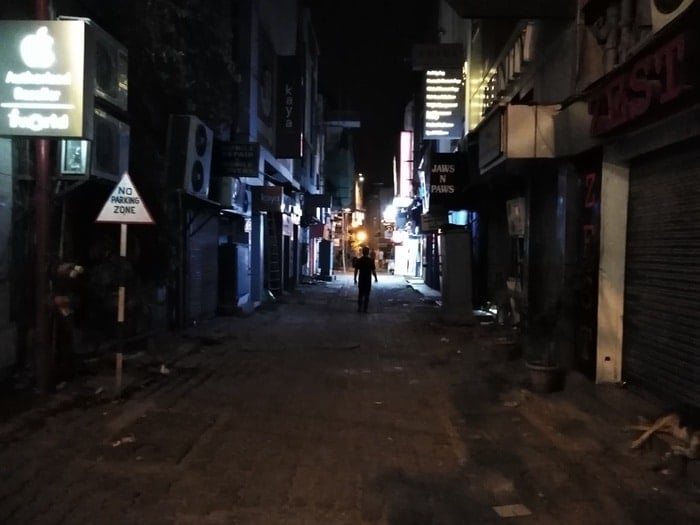 Both phones run EMUI 8.0 on top of Android 8.0. Now, we know there is a Stock Android loving brigade out there and for them, the very sight of Honor’s elaborate skin would be irritating, but we have a soft corner for the UI. No, it does not always work as smoothly on the devices as we would have liked – you see occasional lags – but there are features aplenty, which many users in this price segment would appreciate. We love the fact that you can connect the phones to multiple devices over Bluetooth using party mode, which is actually useful for those moments when you want to get music over a set of speakers or headphones. There is also a Ride Mode in which calls will be answered with voice and SMS messages, and Bluetooth and headsets will be disabled, allowing the consumer to focus on the road. And while some might frown at third-party apps, we can see many appreciating the fact that the phones come with Facebook, Facebook Messenger, Instagram, UC Browser and Netflix right out of the box. Huawei has also thrown in some of its tools including a file manager, voice recorder, calculator, weather app, and a few others, including an eye comfort mode for better reading (although the screen looks a tad yellowish). You can also turn off the touch navigation buttons at the base of the displays, and opt for a navigation dock, which places a tiny circle on the display, which you can tap or slide to go home, back or view recent apps. It really is a matter of taste – those loving minimalism will frown at the replication of apps (UC browser and Chrome, Google Photos and the Gallery), but we think not everyone will be displeased. 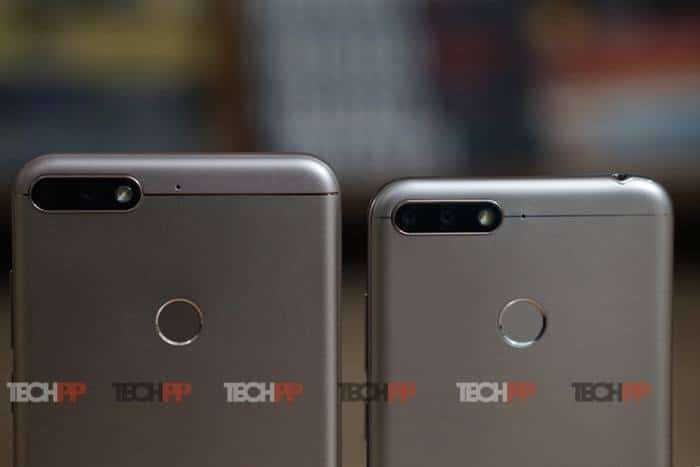 And we left the best for last: face unlock works just fine in good light conditions. Do not try it in low light conditions, though. The fingerprint sensor works very well too.

Not multimedia monsters, but good enough for casual gamers 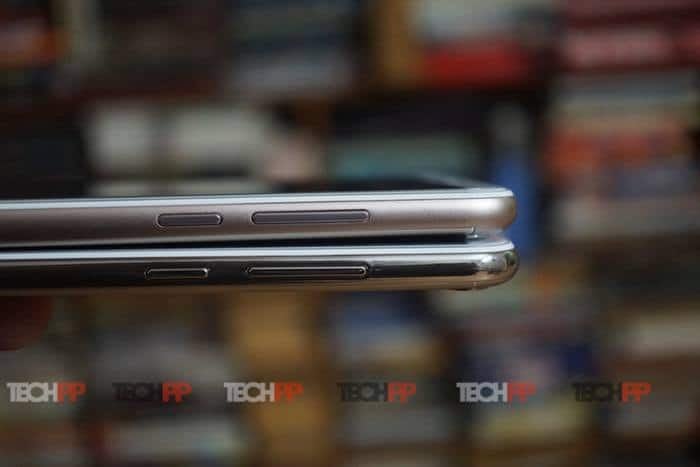 Neither phone is designed for heavy-duty gaming, and we would definitely not recommend going out and hoping to conquer PUBG on either device. The 7C does handle titles like Asphalt and Hitman a bit more smoothly than the 7A, but the laughs inevitably creep in after a few minutes, as does a certain amount of heating, although nothing to set alarm bells ringing. Even having more than a dozen apps will see a slight lag now and then. To be fair, it never reaches deal breaking proportions, but yes, in these departments, both phones are a notch below their coursing, the Honor 9 Lite. That said, if all that you are looking for from your device is a lot of casual browsing and social networking, both the 7A and 7C rock it. Those displays are good for viewing videos and games, and the sound quality on the loudspeaker and headphones is decent enough. We do not have multimedia beasts in the house, but if you have ambitions that include gaming, then the 7C would be the better option, we think.

Such steady performers both, odd lags aside 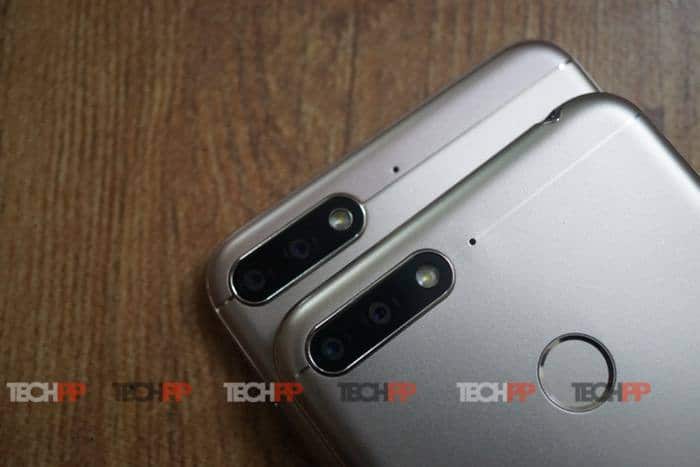 In terms of overall performance, both the 7A and 7C are decent performers for their price. Neither is a benchmark buster but then, that is not expected of them. They do the daily social networking, calling, messaging, mailing and browsing grind without too many hassles, although the odd lag does come in from time to time – and interestingly, these lags occur on both the devices, which makes one wonder if the issue is with EMUI rather than with the hardware. Battery life on both devices is about the same – handle them carefully and you will be able to get through a day of usage, but push them and you might find yourself searching for a charging point or your trusty portable charger as night descends.

The best at their price? Well, contenders, definitely! 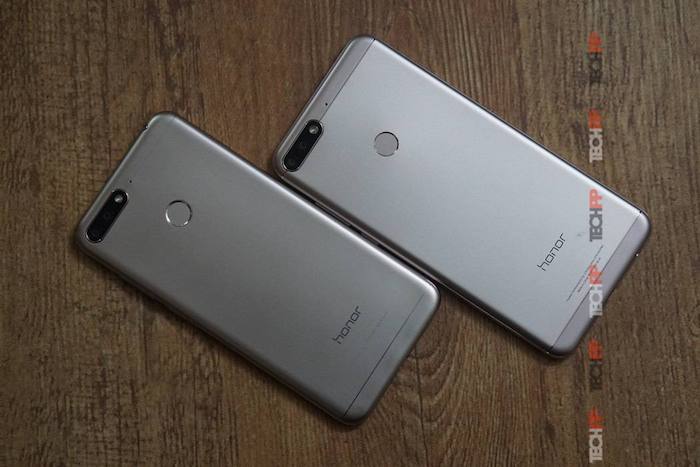 All of which brings us to the key question: are the 7A and 7C worth their price tags? The 7A comes for Rs 8,999, while the 7C comes for Rs 9,999 for the 3 GB/ 32 GB variant and Rs 11,999 for the 4 GB/ 64 GB variant. The 7A will find itself going against the Xiaomi Redmi 5, which does not have its dual cameras, but has a larger 18:9 aspect display, a Snapdragon 450 processor, as well as a larger battery and comes for Rs 8,999. Selfie lovers might also like Mobiistar XQ Dual, which comes with a smaller full HD display but a similar Qualcomm 430 chipset and better selfie cameras. The 7C, however, goes up against much more formidable competition, not just from other brands but from within its own family. Right up front, of course, is the similarly priced Redmi Note 5, which might not boast dual cameras but has what is considered by many to be a better processor (Snapdragon 625) and a full HD+ display with the 18:9 aspect ratio, not to mention a larger battery. And then there is the matter of the Honor 9 Lite, Honor’s bestselling phone of the year, which at Rs 10,999, not only boasts dual cameras on both front and back and a very good processor and full HD+ display but also comes with a brilliant mirror finish on the back, making it perhaps the most distinct phone in its price category. There is also the newcomer Realme 1 and the Asus Zenfone Max Pro M1, both of which offer very good hardware at a slightly higher price of Rs 10,999.

Both the Honor 7A and 7C are contenders in the sub-Rs 10,000 category with the 7A, in particular, being a great option for anyone seeking an 18:9 aspect ratio display, dual cameras, and face unlock at a relatively affordable price from a high-profile brand. The 7C has a much tougher battle to fight but it remains one of the better options for anyone seeking a good device for under Rs 10,000. And that is not really a bad place to be, believe us.

Seven iPhone Samurai: Seven of our favorite iPhones
Sony WH-1000XM4 with Speak-to-chat and Multi-point…
How the iPhone's Camera UI Went From 'Point and Shoot' to…
Honor 30 launched alongside Honor 30 Pro and Honor 30 Pro+…
How Apple Aces Tech Presentations: Seven Points (beyond…
Seven Years, and STILL Going Strong: What Makes the ATH-M50x…