The majority of Truecaller’s efforts in the past year have been tailored to push its app beyond being just a caller ID tool. One of those was the ability to send and receive payments through India’s standard interface, UPI. The company is serious about that more than ever and it’s today rolling out another feature to take Truecaller Pay a step further. 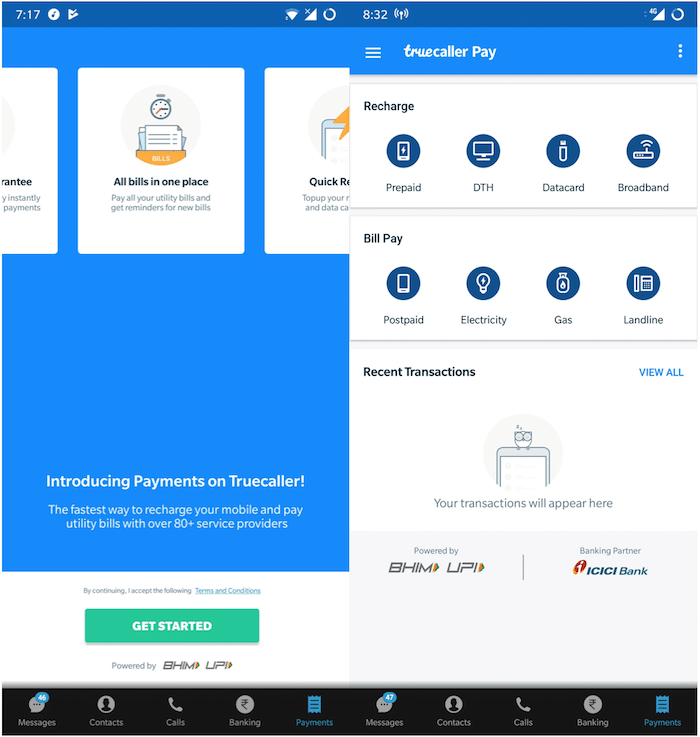 After teasing it for a few weeks, Truecaller is now rolling out a billing platform to its Android beta channel. The app has a new tab on the extreme right through which you can recharge and pay for various bills. At the time of this writing, a total of eight services were available including prepaid or postpaid mobile accounts, DTH, Datacard, Broadband, Electricity, Gas, and Landline.

The billing feature is, of course, powered by Truecaller Pay which is designed in partnership with ICICI and plugs into your UPI account. The entire interface is largely straightforward and in comparison with other similar platforms, quite barebones as well. It does come with the usual features you’d expect from payments apps such as transaction history, multiple bank accounts, and more.

Truecaller’s Payments platform does miss out on a series of services people tend to use on alternatives like Paytm or even Google Tez. The app, for starters, doesn’t let you buy movie or travel tickets. In addition to that, as of now, there are no incentives and offers it seems which one of the primary lures when it comes to nearly every payments service in India. Then again, it’s still in beta and we should expect an official launch soon.

If you’d like to try out the features now, you can either sign up for Truecaller’s Android beta or just sideload the APK file which can be found here.

It’s unclear, though, how successful Truecaller Pay has been in the last year. I personally employ the app as my primary dialer and SMS client but I have never set up payments on it. That’s mainly because how widely integrated services like Paytm are right now. The majority of Truecaller users don’t even go past the caller ID notifications. Truecaller needs to offer enough reasons as to why anyone would want to configure yet another payments platform. As of today, it doesn’t offer any. Sure, the idea of having just one app for most of your phone requirements does sound exciting but Truecaller also has to worry about privacy and data collection which continues to be one of its key bottlenecks.

Truecaller launches Guardians: a safety assistant for the real world
Read Next

iOS 13 Adds Dark Mode, up to 2X Faster Performance and a…
Truecaller introduces Group Chat feature on Android and iOS
Lenovo IdeaPad Slim 5i Review: Slim in its Name, Strong at…
Huawei sells its Honor smartphone brand in a bid to ensure…
Facebook announces Facebook Pay for Facebook, Instagram, and…
Google For India 2019: Everything Announced (Pay, Assistant,…