At its 41st Annual General Meeting, Reliance Jio officially announced its FTTH (fibre-to-the-home) broadband service, Jio GigaFiber. Available from August 15th, Jio GigaFiber is said to bring a gigabit connection at a more affordable cost. For starters, the telecom operator says GigaFiber will be brought to 1,100 cities throughout the country. Jio said it aims to bring India among the top 5 global fixed line broadband players. 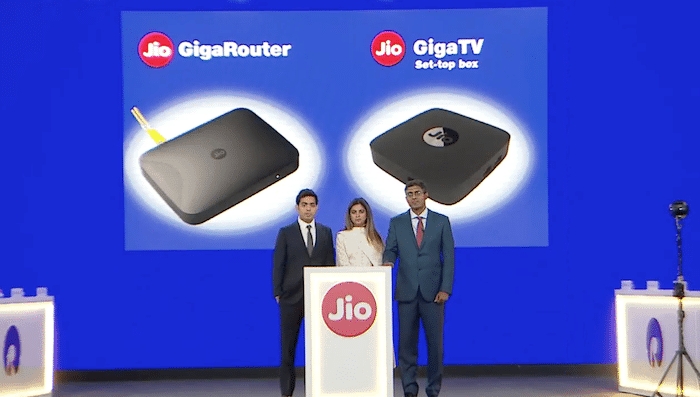 In addition to Jio Giga Fiber, Reliance Jio also introduced a new smart home platform. One of the key components of that is a set-top box and media streaming device, Jio GigaTV. It will offer access to a series of Jio services including JioTV through which you can stream live cable channels, JioCinema for movies, and more.

Moreover, Jio GigaTV comes with a video-calling feature which will let you call just about any device on a Jio network such as a smartphone, tablet or of course, another GigaTV subscriber. There’s support for voice commands as well so that you can simply ask the remote to play something (similar to Amazon’s FireTV Stick) in any Indian language. GigaTV, like other Jio services, is also restricted to the telecom operator’s own broadband connection. Because of that, Jio will bundle a GigaFiber router with every GigaTV purchase. Although one can still get a GigaFiber router as a standalone service.

Reliance Jio will also soon detail a broader smart home platform which will include a handful of home products like surveillance cameras, connected speakers, GigaTV, smart plugs, thermostats, and more. Reliance is expected to announce the price and availability next month on the 15th.

The registration for Jio Giga Fiber broadband and Jio GigaTV will begin from August 15 either via the MyJioapp or the official website, Jio.com. The price and plans for both the services haven’t been announced yet and should be made available closer to August 15th. The company says it will roll out the service in those localities with highest interest, so expect a phased rollout which will be much slower than wireless rollout we saw in 2016.

Thus far, the GigaFiber service has been offered under a preview offer, wherein users could avail of high-speed Internet of up to 100 Mbps for 90 days, along with a monthly data quota of 100 GB. The company has been charging no installation charges but taking a refundable security deposit of Rs 4,500 for the ONT device (GigaHub Home Gateway). On consumption of 100 GB of data quota within a month, preview data users have been offered a complimentary data top-up of 40 GB via MyJio App or through Jio.com. Jio GigaFiber will be extended to homes, merchants, small and medium enterprises, and large enterprises simultaneously across 1100 cities.

Was this article helpful?
YesNo
TechPP is supported by our audience. We may earn affiliate commissions from buying links on this site.
Read Next
How to Buy JioPhone Next: Complete Guide and FAQ
#Jio GigaFiber #Jio GigaFiber Home #Reliance Jio