Ever since its launch, Reliance Jio has been a critical driver for democratizing a slew of Internet technologies in India including 4G itself. In a span of merely two years, it wouldn’t be an exaggeration to say that the telecom operator has truly managed to revolutionize how Indians access the Internet. However, the company seems to have now trained its sights on augmenting smart home adoption in the country with its new Jio GigaFiber platform.

Here’s how it works. 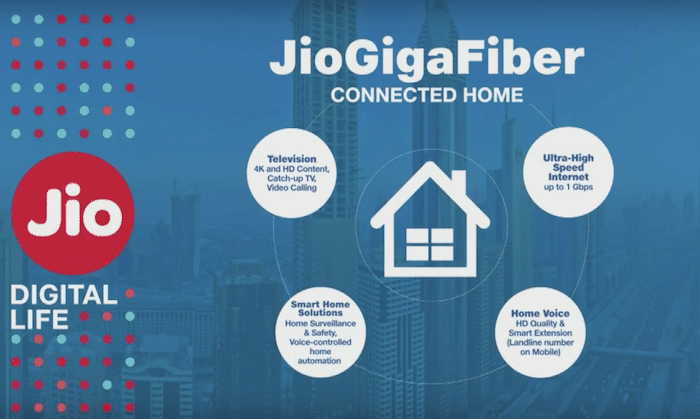 Jio GigaFiber: How it works?

At the core of this lies its fixed Fiber broadband service, GigaFiber which is expected to bring gigabit bandwidth at a more affordable cost and essentially power the rest of the devices. Jio will be offering its own router too called “GigaRouter”. The telco has been conducting numerous beta trials for the last year in several cities and says it’s now finally ready for a public launch.

The company is planning to reveal more details about its pricing and availability as well as open registrations on the Indian Independence Day, August 15th. To kick things off, Reliance Jio says it will prioritize regions with the highest number of registrations. 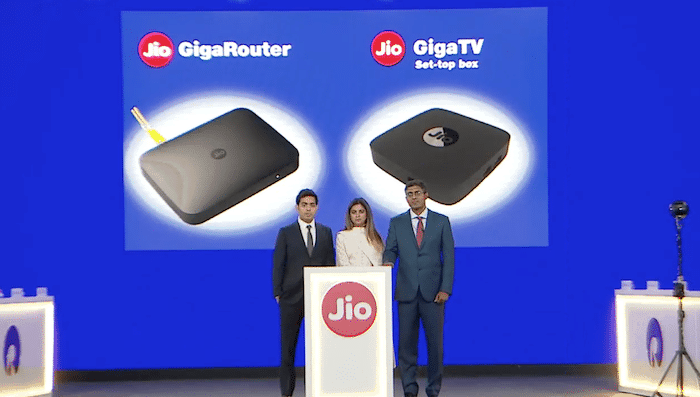 The other key element is the set-top box subscription, Jio GigaTV. It will let you access all of Jio’s entertainment services on a bigger screen. This includes JioTV through which you can stream live cable channels, JioCinema for movies, JioMusic, and more. In addition to that, the device will come with a video-calling feature which will allow you call just about any device on a Jio network such as a smartphone, tablet or of course, another GigaTV subscriber.

There’s support for voice commands as well so that you can simply ask the remote to play the channel or show you wish to watch. And yeah, multiple Indian languages will be supported. GigaTV, like other Jio services, is also restricted to the telecom operator’s own broadband connection. Because of that, Jio will bundle a GigaFiber router with every GigaTV purchase. Although the vice-versa is not true. 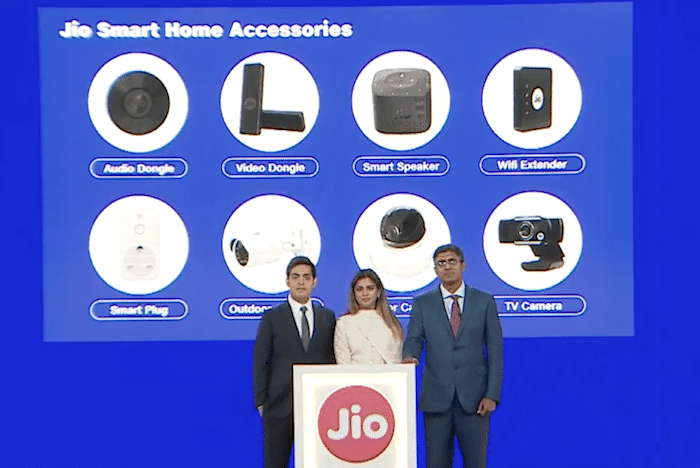 With the GigaFiber Connected Home platform, Jio will also offer a wide variety smart home accessories you would need for controlling nearly aspect of your home from a smartphone app such as surveillance cameras, smart connected speakers, WiFi extenders, GigaTV, smart plugs, thermostats, door locks, various sensors for detecting events like a gas leak, and more. The last module is an HD-enabled landline connection.

The way how Jio aims to stand out with its connected solutions is by taking the hassle out of configuring a smart home. Anyone who opts for the package won’t have to worry about a thing, says the company. Once a customer purchases a plan, Jio will be responsible for setting up all the connections and home appliances. There’s also a chance the telecom operator has partnered with builders for pre-installing its Connected Home platform into new apartments. Moreover, Jio claims that the whole Jio GigaFiber Smart Home package can be installed in less than an hour by Jio personnel.

One of the bottlenecks behind why smart homes are still not as common is, of course, the costs and the limited options. Therefore, it remains to be seen how Reliance Jio will be pricing these packages. Although, if history is any indication, it is expected to be vastly more affordable than the existing players. In the last couple of months, the concept of smarter homes has gained traction as companies such as Amazon and Google continue to bring their voice-enabled connected devices to the country.

However, it has remained difficult to justify their use cases as buyers don’t have a ton of applications for it beyond the usual like music streaming, facts, and more. There is certainly a possibility Reliance Jio will allow third-party integrations for Google Assistant too considering it’s already available on JioPhone.

Kent CamEye Homecam 360 Review: Stay Connected with Your Loved Ones
Read Next