Over the past few weeks, a flurry of OnePlus 6T speculations and leaks have appeared including a few confirmations from the company itself. But the one we have today might put most of those to rest. The new report comes from WinFuture, a reliable source which reveals that the OnePlus 6T will feature incremental internal upgrades, a slightly larger screen, and of course, an in-display fingerprint sensor. 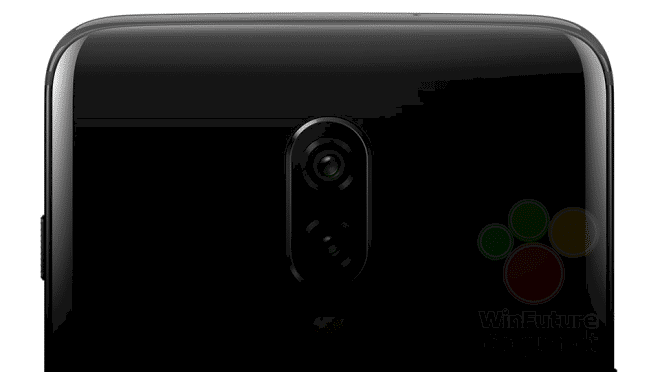 The leaked image also suggests the OnePlus 6T won’t have any design alterations and will feature the same all-glass exterior found on the OnePlus 6. In addition, the Mirror Black color option will be retained as well, although we don’t know about any other gradients yet. The most significant change on the outside is clearly the absence of a fingerprint reader beneath the two rear cameras since the OnePlus 6T will have it under the screen which was confirmed by OnePlus itself weeks ago. In addition, there won’t be a standard headphone jack as the company finally succumbs to the hegemony of USB Type-C audio. Other minor hardware changes include a repositioned noise-canceling mic and that the power key has been moved a little.

The display on the OnePlus 6T will be an OLED one with a resolution of 1080p. However, the size has been marginally increased to 6.41-inch from 6.28-inch on the OnePlus 6. The leaked render, unfortunately, though, fails to confirm whether the forthcoming flagship will have the new so-called “Waterdrop” notch.

The OnePlus 6T is officially expected to be launched sometime next month, most likely on October 17th. The Chinese phone maker has already confirmed two of the 6T’s biggest upgrades — an in-display fingerprint reader and the lack of a headphone jack. OnePlus recently also introduced a pair of new USB Type-C wired earphones and announced that it’s also working on a smart television.

Was this article helpful?
YesNo
TechPP is supported by our audience. We may earn affiliate commissions from buying links on this site.
Read Next
OnePlus Nord Watch vs Amazfit GTS 2 Mini New Version: Which One Should You Buy?
#oneplus #OnePlus 6T