Samsung has today officially introduced its highly awaited Galaxy A7 (2018) smartphone. Why was it highly awaited, you ask? Well, that’s primarily due to the three camera sensors present on the rear. Yes, Samsung’s new mid-range phone offers a triple camera setup on the back for a sum of €349. 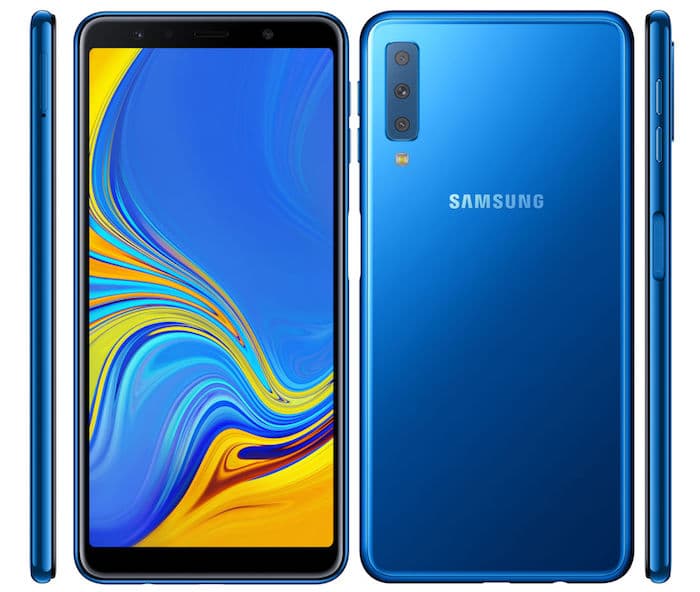 Unlike the Huawei P20 Pro, Samsung’s three-camera arrangement won’t set a new benchmark in the industry which is expected considering the price. It consists of a regular 24-megapixel f/1.7 lens, an 8-megapixel wide-angle sensor, and a third 5-megapixel f/2.2 snapper for depth-sensing. On the front too, the Galaxy A7 offers a high-res 24-megapixel selfie camera which the company says is capable of letting in more light by pixel binning.

Apart from that, though, the Galaxy A7 is your usual mid-range smartphone. It comes with an all-glass exterior, a tall 6-inch 1080p OLED screen, and an octa-core processor clocked at 2.2GHz. There’s either 4GB or 6GB of RAM, 64GB or 128GB of onboard storage which can be expanded with a MicroSD card, and a 3300mAh battery which is compatible with quick charging.

In addition, there’s a fingerprint reader housed under the power key and support for two SIM cards. Out of the box, the Samsung Galaxy A7 runs on a dated Android 8.0 software with, of course, a custom skin on top. It will be available in four color options — Blue, Black, Gold, and Pink. It’s priced at €349 (~Rs. 29,400) for the base variant and will go on sale in October in a few European and Asian markets including India.

Was this article helpful?
YesNo
TechPP is supported by our audience. We may earn affiliate commissions from buying links on this site.
Read Next
Samsung Galaxy Fold 4 Tips and Tricks: Get the Most Out of Your Phone
#samsung #Samsung Galaxy A7 (2018)