LG’s smartphone business might be floundering to keep its head above water but that hasn’t stopped the company to introduce new phones this year. And that is not changing anytime soon as LG gears up to unveil its next flagship — the V40 ThinQ which has been today revealed in a leak by none other than Evan Blass on Twitter. 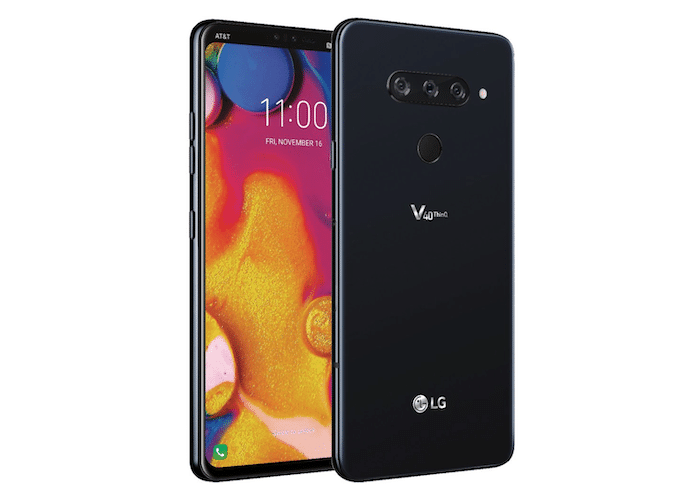 The leaked image confirms earlier speculations which suggested the LG V40 ThinQ will feature a total of five cameras, three on the rear and two on the front. In addition, the phone will have a notch at the top and a narrow bezel at the bottom of a 6.4-inch QHD+ screen.

The camera arrangement houses two front-facing snappers — an 8-megapixel lens coupled with a 5-megapixel secondary lens and three rear sensors — a main 16-megapixel sensor, a second 12-megapixel one with a wide-angle lens, and a third 8-megapixel camera with a telephoto lens.

Other than that, the LG V40 ThinQ has a similar design with the same awful nomenclature. There’s an all-glass design, a fingerprint sensor situated on the rear, and the dedicated hardware key for summoning the Google Assistant.

As for the specifications, the LG V40 ThinQ is expected to be powered by Qualcomm’s Snapdragon 845 chipset, 6GB or 8GB of RAM, up to 128GB of internal storage, and a 3300mAh battery with quick charging support. The LG V40 ThinQ will be officially announced next month on the 3rd.

Was this article helpful?
YesNo
TechPP is supported by our audience. We may earn affiliate commissions from buying links on this site.
Read Next
LG TONE Free FP9 Review: Earbuds that Stay Clean and Sound Clean
#LG #LG V40 ThinQ