If you thought flip-out phones were dead and its time for foldable displays now, Samsung just announced the W2019 which is a clamshell smartphone with a flip-out design involving a hinge and two separate displays. 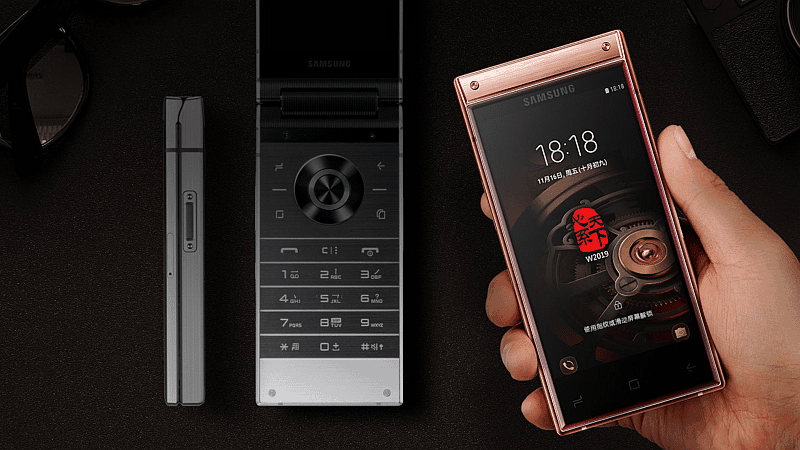 The W2019 is a high-end smartphone by all means. For starters, both displays are Samsung’s signature Super AMOLED panels which stretch 4.2-inches diagonally and carry a Full HD resolution and have the conventional 16:9 aspect ratio. The premium design will be available in two different paintjobs to choose from – Gold Extreme Edition and Platinum Golden Collector’s Edition.

Since the W2019 is a flagship-grade smartphone, it runs on the Snapdragon 845 mobile platform along with 6GB of RAM and 128GB of onboard storage which expandable through Micro SD up to 512GB. The software is taken care of by Samsung Experience UX based on top of Android 8.1 Oreo. The interesting part is that the optics on the rear resemble that of the Galaxy S9+ with dual 12MP shooters with the primary lens having a variable aperture of f/1.5 to f/2.4 along with a secondary telephoto lens. The front houses an 8MP selfie shooter.

The W2019 also comes equipped with Samsung’s very own voice assistant, Bixby on board but thankfully, there’s no dedicated button for it but instead, long-pressing the number “8” key on the T9 keypad will bring it up. There is a side mounted fingerprint scanner and even an iris scanner to help with biometric unlock. Connectivity includes 4G with VoLTE, standard Wi-Fi and Bluetooth and NFC for contactless file transfer and payments. The battery on the W2019 seems quite low at just 3,070mAh as its got two displays to power, but the actual performance of the battery can only be determined after prolonged usage. Even though the W2019 has a modest battery capacity, the premium materials in a chunky flip-out form factor means that the W2019 weighs in at a whopping 257g.

Similar to all the previous “W” series smartphones by Samsung, the W2019 will also be exclusive to the Chinese market and while the official pricing has not be revealed yet, the device has been officially listed on Samsung’s website.