Samsung will put an end to the constant stream of leaks next month as it gears to officially announce its forthcoming flagship series. The Korean phone maker has revealed that it will take the wraps off the Galaxy S10 lineup on February 20th, a week before the Mobile World Congress. The event will take place in San Francisco instead of Barcelona where it has historically been held. 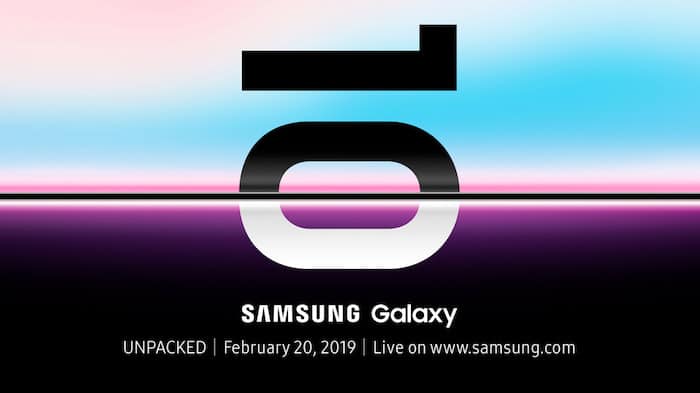 The Galaxy S10 series is expected to be one of Samsung’s most significant upgrades as it marks the tenth anniversary of the lineup. Much of that has already been leaked, courtesy of the countless reports over the past few weeks.

While the majority of glass exterior is said to remain identical, the Galaxy S10 phones will feature Samsung’s new Infinity-O display which essentially means the front sensors like selfie camera will be tucked away in a tiny little notch at the top-right corner. In addition, this time, there will be more than the standard two variants as rumors suggest the company will also launch a “Lite” option.

Apart from that, the highest end Plus variant will possibly have three cameras with varying focal lengths on the rear. All of them will carry a regular headphone jack and support quick charging history. The Samsung Galaxy S10 and S10 Plus will reportedly come with an in-display fingerprint reader too and skip the infrared facial recognition system.

While the rest of the hardware specifications are yet to be verified, reports say the Galaxy S10 Plus and S10 will be likely powered by Qualcomm’s Snapdragon 855 chipset in the United States and the company’s own Exynos 9820 elsewhere. They could have up to 12GB of RAM, 1TB of onboard storage with MicroSD expansion, and Android Pie with Samsung’s One UI on top.

Was this article helpful?
YesNo
TechPP is supported by our audience. We may earn affiliate commissions from buying links on this site.
Read Next
Samsung Galaxy Fold 4 Tips and Tricks: Get the Most Out of Your Phone
#samsung