Instagram has spiraled from all fun and games into a desperate revenue-hungry creature in just a few years. But relatively speaking, it’s the most tolerable social network out there and a lot of early users are still clinging onto it hoping Instagram will soon fix some of its glaring, toxic shortcomings today. If history (and its parent) is any indication, though, that day will never come. 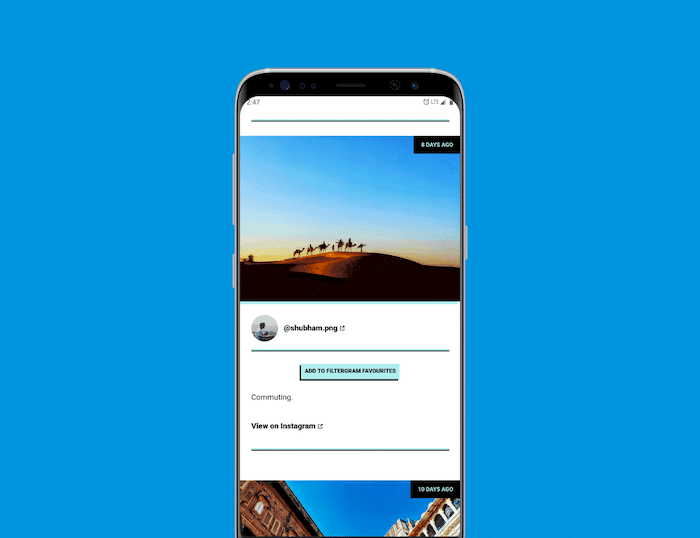 Fortunately, for users who are yearning for that good ol’ Instagram experience and escape its toxic numbers-driven influencer culture or the stories’ format hostile takeover of your feed, there’s finally a solution.

It’s called Filtergram and it’s a web app that’s designed precisely for Instagram users who despise what it has evolved into. The idea here is simple. Filtergram gets rid of all the modern Instagram elements such as stories, advertisements, the explore page, the algorithmic feed, and more. In addition, there are no likes, comments, or the ability to publish either.

Instead, you have a basic, reverse chronological feed which only shows posts from users you want to follow and their respective captions. Filtergram’s design itself is pleasantly minimal and modern and suits flawlessly to the Instagram aesthetic. You can favorite posts but that feature is merely for when you’d like to revisit the post later. It doesn’t affect its like count.

Filtergram doesn’t even need access to your Instagram account which is a common concern among other third-party tools. However, because of that, it also suffers a drawback which could a dealbreaker for you. You can’t follow private accounts. You do have to create a Filtergram account so that the app can save your following and favorites lists.

In spite of that, Filtergram is ideal for people who employ Instagram as a way to follow professionals. It’s, of course, not meant to be your primary Instagram app since you can’t post anything. But if you’re someone who is fed up of where the social network is headed, it’s perfect as a read-only, secondary tool. Or as the app’s tagline puts it — “for people who want to see some Instagram content, but aren’t too keen on the Instagram Experience itself.”

Filtergram is also free to use and you can get started by heading over to this link on your phone or computer.

Was this article helpful?
YesNo
TechPP is supported by our audience. We may earn affiliate commissions from buying links on this site.
Read Next
How to Unmute on Instagram: App, Stories, Profile, and More [2022]
#Filtergram #Instagram