Today, Reliance Jio has announced two new long-term validity plans for its Jio Phone users. These new plans come in at a time where most of the telecom operators are releasing their own long-term validity plans after taking away lifetime validity options. Priced at Rs 297 and Rs 594, the plans offer unlimited calling along with SMS benefits and complimentary subscription of Jio apps. 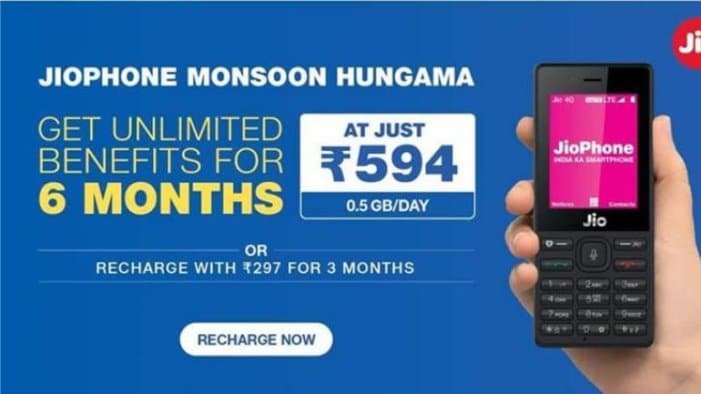 With the new Rs 297 plan, Jio Phone users get 0.5 GB of data per day for 84 days, which sums up to a total of 42 GB of data valid for 84 days. Users also get unlimited calling service along with 300 free SMS and a complimentary subscription of Jio apps for free.

On the other hand, the Rs 594 plan offers Jio Phone users again with 0.5 GB of data per day, but for 168 days, which sums up to a total of 84 GB of data valid for 168 days. Just like the Rs 297 plan, this plan also includes unlimited calling service along with 300 free SMS and a complimentary subscription of Jio apps for free.

The new plans come in as an addition to the existing Jio Phone plans which cost Rs 49, Rs 99, and Rs 153, with 1 GB, 14 GB, and 42 GB of data respectively, and are valid for 28 days. A thing to note here is that the two new plans, in addition to existing plans mentioned above, can only be availed by customers who own a Jio Phone.

We are not sure why Reliance Jio is restricting the new plans to JiO Phone users only, but we do expect them to roll out the new plans to all users pretty soon. At a time when incumbents like Airtel, Vodafone-Idea are taking away the lifetime validity and replacing them with long-term validity plans in order to boost the ARPU (Average Revenue Per User), we can expect Reliance Jio to come up with more such plans in the near future.