The wearable marketplace, particularly smartwatches, has been seeing Apple dominate the competition with the Apple Watch series blending in with the entire Apple ecosystem. Google, on the other hand, has been trying to revive its smartwatch division, by renaming Android Wear to WearOS and by pushing a couple of updates to the onboard Google Assistant and revamping the entire UI. In fact, they’ve gone as far as taking over the smartwatch division of Fossil, a premium partner in manufacturing WearOS smartwatches. 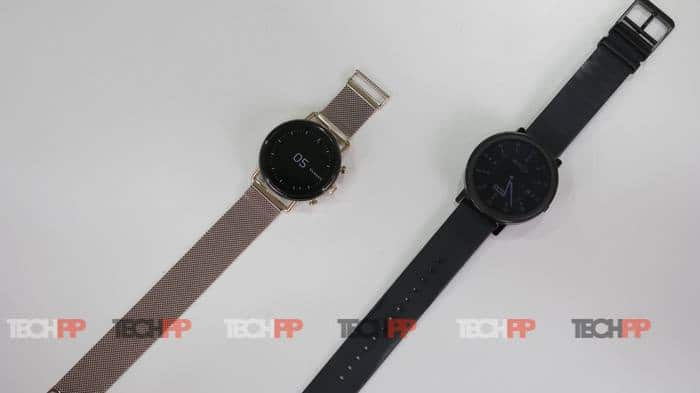 The Snapdragon Wear 3100, which was supposedly meant to address the poor battery issues that plagued the Wear 2100 SoC is still not in major circulation and the devices that use the new chipset still struggle to get a past a full day’s usage. With all these shortcomings generally accompanied by a hefty price tag, does it make sense to invest in a WearOS smartwatch in 2019? I used the Skagen Falster 2 and the Misfit Vapor over an extended period of time to gauge if it does make performing smartphone-related tasks easier. 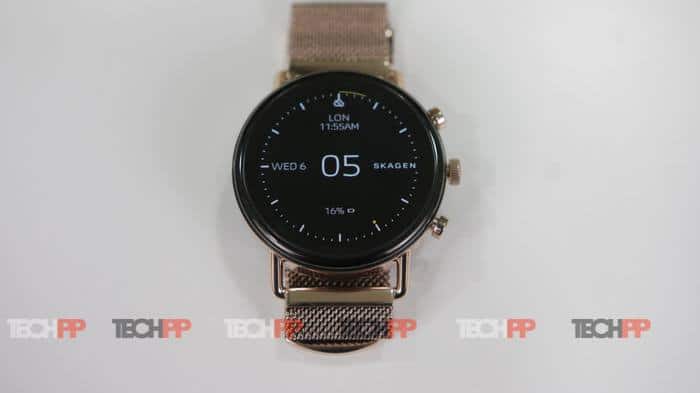 Before we get to the “smart” aspect of it, let’s not forget that watches also portray your style statement and the Skagen Falster 2 has undoubtedly got that covered. We’ve got the Rose Gold color with a Milanese strap and boy does it look attractive. The mechanism of the strap, however, is slightly unorthodox and relies on just a single magnet to stay in place. It was also slightly uncomfortable wearing it for extended periods, but the appearance is subjective and your opinion may differ. You can, however, swap out the bands according to your liking.

The Misfit Vapor, on the other hand, is a minimal looking wearable with a sober paint job and no goddy elements on the dial. The intent here is to say that WearOS watches do come in various styles and you can pick your favorite one and since most have a removable strap, you can customize it to your liking. 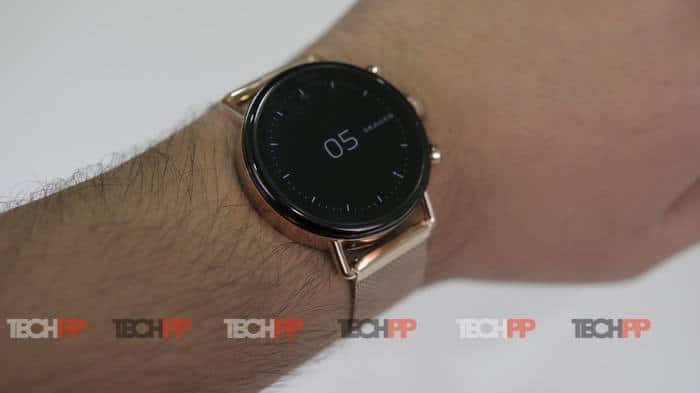 WearOS smartwatches generally tend to use OLED displays which helps save battery given that the display is meant to be turned on all day long. The display on the Misfit Vapor is slightly bigger than the one on the Falster 2 and while it’s the OEM’s choice of which display to put it in, the ones on the two watches we used were satisfactory on most occasions, except for we wished the sunlight legibility was better as it can get slightly hard to view the display outdoors.

The reason you’re getting a watch in the first place, of course, it to keep time. The Play Store has a ton of third-party watch faces to choose from if the stock ones are too less-hippy for you. The catch, however, is that most third-party watch faces slow down the performance of the watch, which by the way isn’t any great in the first place (more on that later) and consume more battery, adding salt to injury. 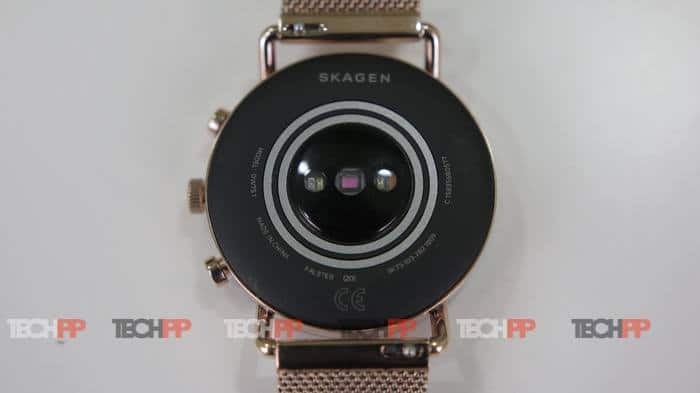 The Snapdragon Wear 2100 SoC which we spoke about earlier, is not only inefficient with battery but also hasn’t aged too well and the 28nm based Snapdragon 410-equivalent chipset for wearables can at times test your patience. The revamped home screen layout with the latest update of WearOS brings multiple elements at a swipe across the screen from four different areas which does prove to be rather heavy for the SoC as one can see multiple frames being dropped and a choppy experience throughout the UI.

Be it scrolling through your list of apps or launching them, if you expect snappy performance close to what we’ve come to expect from modern-day smartphones, it’s time to switch to the Apple ecosystem. Just kidding! (or maybe not). Jokes apart, even with the sub-par performance, you can still install and run multiple apps and games and for a quick game of Sudoku at a boring meeting or for a nonchalant update of local news and weather, the experience isn’t too bad.

You can tweak the animation speeds a little to achieve a faster “feel”, the old trick ever since the TouchWiz days, but otherwise, if handled patiently, the smartwatch can be quite helpful in order to reply to notifications or use the Google Assistant to set a quick reminder or to take notes. Most smartwatches running on WearOS have updates handled directly by Google, which means you’ll most likely be on the latest version unless you get a really old smartwatch like the Moto 360.

The pairing process is fairly simple and all one needs to do is get the WearOS app from the Play Store on your smartphone and follow on-screen instructions after which all your data will be copied from your phone to your watch. 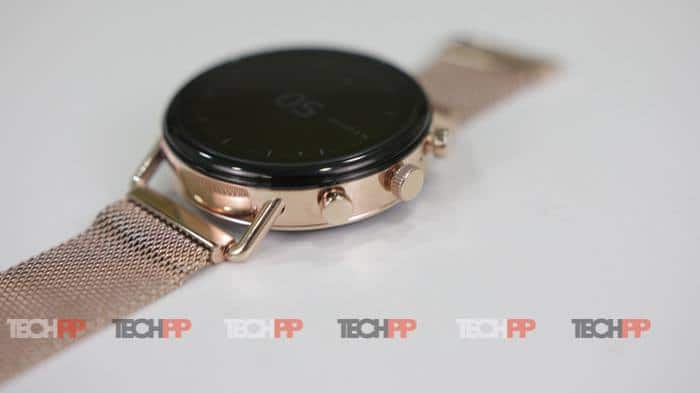 Let’s address the elephant in the room, the battery life. It doesn’t come as a surprise (especially after all the bashing earlier) that you need to charge this baby every day without fail, else you’ll have to head to work with a fancy paperweight on your wrist the following day. Even worse, if you use the Google Assistant frequently or have a lot of incoming notifications throughout the day, you’ll find it hard to make it through even a single day.

Both watches charge over a proprietary charging dock which connects to a standard wall outlet and while the Misfit Vapor takes about 2 hours for a full charge, the Falster 2 from Skagen takes a little lower than 90 minutes which is good. If you end up getting one for yourself, make sure you use it carefully. 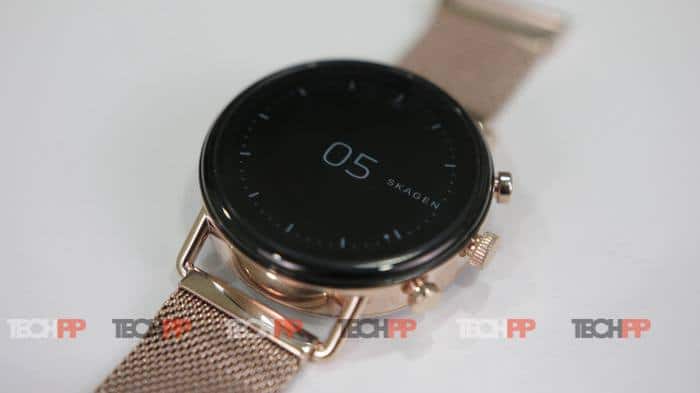 The Skagen Falster 2 is “swim-proof” and the Misfit Vapor is IP68 rated water resistant and both watches have an onboard microphone used to trigger Google Assistant and for voice input. You can reply to all your notification using the onboard keyboard or pre-defined replies and emojis, probably one of the main reasons you would be buying a smartwatch. The Skagen Falster 2 has NFC built-in for contactless payments, something that the Misfit Vapor lacks.

The fitness data is pretty accurate too on both watches. Google Fit keeps a track of the steps and distance you’ve walked, and you can set exercise goals for every day. There’s also a heart rate scanner on board.

A weird caveat with WearOS smartwatches is that each time you switch phones, you have to factory reset your watch to unbind it from your current phone. While this might not be much of an issue for an average consumer, reviewers like us who switch phones on a regular basis will find it extremely frustrating to set up the watch from scratch each time along with the extra load of manually downloading each individual app. 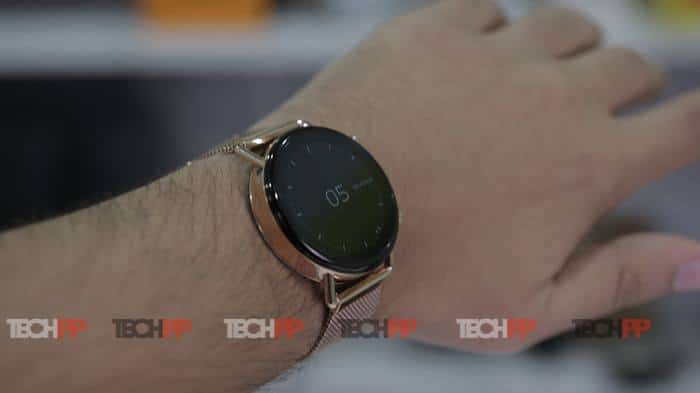 Even after so many negatives, smartwatches are a nice piece of novelty that is more of a luxury than a necessity. You can use it to reply to notifications at times when you can’t remove your phone out of your pocket, or for quick reminders and schedules. For a price that is upwards of Rs. 20,000 in India, unless and until you really need a glorified fitness tracker with some extra capabilities, a WearOS smartwatch doesn’t really make sense, especially given the fact that cheaper fitness trackers, available for less than 10% of the price can even display notification along with tracking your activities, albeit you cannot reply to them or run applications. For those of you on the iOS side of things, enjoy the Apple watch! For those of you on Android, a perfect smartwatch is still a myth.

Was this article helpful?
YesNo
TechPP is supported by our audience. We may earn affiliate commissions from buying links on this site.
Read Next
How to Split Screen on Chromebook [3 Easy Ways]
#Android Wear #google #Misfit #Misfit Vapor #review #Skagen #Skagen Falster 2 #WearOS