Samsung Galaxy A40 with Dual Camera and Infinity-U Display Announced

After a few leaked renders since the past few days, Samsung has today unveiled its newest smartphone, the Galaxy A40. The device is listed on the company’s official website in Europe and fits in right between the existing Galaxy A30 and Galaxy A50 smartphones. Some of the highlights of the device include an Infinity-U Display, Exynos 7885 chipset, and dual camera setup on the rear. 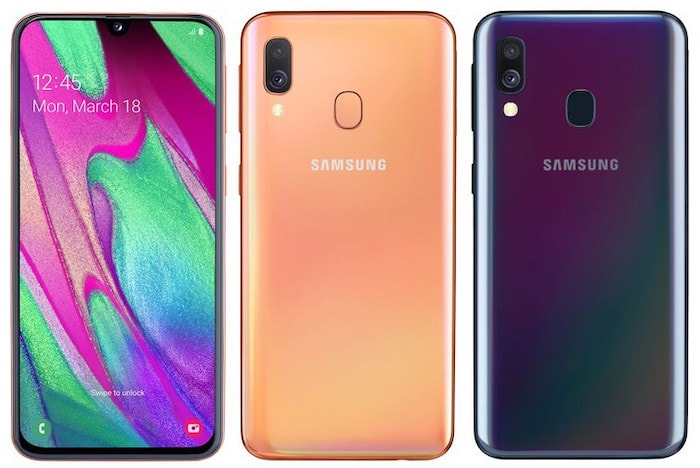 The Galaxy A40 features a 5.9-inch 2280 x 1080 pixels Full HD+ Infinity-U Super AMOLED display on the front and a 3D Glasstic back, found on the Galaxy A30 and A50, on the rear. It is powered by an Octa-Core 14nm-based Exynos 7885 processor with Mali-G71 GPU, paired with 4GB of RAM and 64GB of internal storage (expandable up to 512GB via micro SD card). The A40 sports a fingerprint scanner mounted on the rear, for authentication, and USB Type-C for charging and data transfer. It comes with a 3100mAh battery and runs on Samsung One UI, based on Android 9 Pie.

In the camera department, the A40 has a dual camera setup on the rear, with a 16MP f/2.2 aperture primary sensor and a 5MP ultra-wide secondary sensor. On the front, it comes with a 25MP front-facing camera for selfies.

Samsung Galaxy A40 Pricing and Availability

The Galaxy A40 comes in four color options: Black, Blue, Orange, and White, and is listed for 249 Euros (~Rs 19,500) on the website. It is expected to go on sale in Europe, starting April 10, with no word on its global launch.