Xiaomi has today launched a new smartphone, the Redmi 8A, via an online launch show, in India. The phone is a successor to the Redmi 7A, which was announced a few months back, and makes its first appearance in the Indian market. For the past few days, Xiaomi has been teasing the phone across some of the social sites, which offered some hints to the consumers on what to expect out of the company’s newest offering. 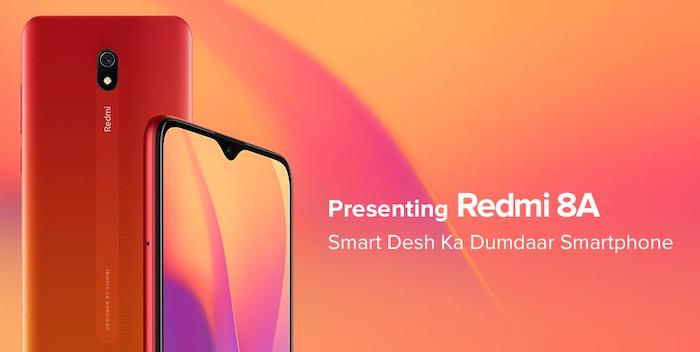 Xiaomi Redmi 8A: Design and Display

The Redmi 8A features an ‘aura wave grip design’, which, according to the company, offers a handy grip in hand. On its front, the phone has a 6.22-inch HD+ TFT display with a 1520×720 pixels screen resolution, a dot notch to house the front camera, and a 19:9 aspect ratio. Further, to offer better protection against accidental drops and water splashes, there is a Corning Gorilla Glass 5 protection on top, along with P2i splash-proof coating. It comes in three color options: Midnight Black, Ocean Blue, and Sunset Red.

At its core, the Redmi 8A comes with a 2GHz octa-core Qualcomm Snapdragon 439 processor with Adreno 505 GPU under the hood, paired with 2GB/3GB of RAM and 32GB of internal storage (expandable up to 512GB with microSD card). To power everything, it includes a 5,000mAh battery with 18W fast charging support. Furthermore, the phone also comes with a USB Type-C port, which, for phones in this price segment, is elusive. And also includes a 3.5mm audio jack, FM radio, and dual SIM + microSD card slot. On the software front, the phone will run on MIUI 10 based on Android 9 Pie out of the box.

For optics, the 8A sports a single 12MP Sony IMX363 sensor with f/1.8 aperture on the rear. Additionally, it also comes with AI Portrait Mode and AI Scene Detection to offer better image quality. Towards the front, it has an 8MP camera for selfies and facial authentication.

Xiaomi Redmi 8A: Pricing and Availability

Was this article helpful?
YesNo
TechPP is supported by our audience. We may earn affiliate commissions from buying links on this site.
Read Next
Eight years, Eight times Xiaomi surprised us with the Redmi Note
#Redmi 8A #xiaomi