As promised, OnePlus has today unveiled its first-ever concept phone, the OnePlus Concept One, at the ongoing Consumer Electronics Show in Las Vegas. For its concept phone, OnePlus has collaborated with the popular carmaker McLaren, continuing the collaboration that has produced some of the most stylish smartphones in the past few years. Let’s look at the all-new OnePlus Concept One smartphone in detail. 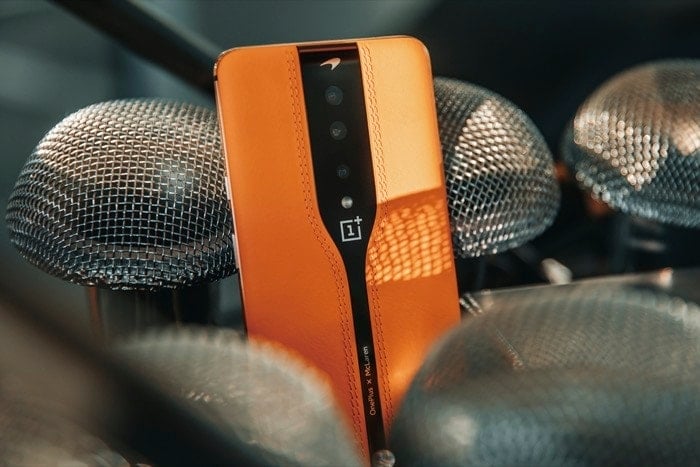 As already mentioned, OnePlus has always been at the edge to deliver some of the most stylish looking smartphones inspired by some of the best-looking racing cars. Following this trend, and taking a leap even further, it has not come up with its concept phone that takes design inspiration from McLaren’s 720S Spider sports car, which is popular for its retractable hardtop that features an electrochromic glass panel to quickly switch between tinted and transparent states. Besides this, it also integrates both glass and leather from the same trim designed for McLaren’s supercars in the iconic papaya orange color — to pay homage to McLaren Racing’s history — as can be seen on their newest Formula 1 car.

Delving more into the color-shifting electrochromic glass technology — that allows it to change the transparency to give the appearance of an invisible camera — OnePlus has experimented with the CMF (color, material, finish) design to produce this effect. To do this, it has used organic particles to allow for the ability to create changes in the transparency in a manner that quickly shifts the glass covering the camera lens from opaque black to entirely clear. As a result, you end up with a clean and unbroken surface when the camera is not in use, giving it an impression of invisible design. OnePlus says that the addition of the new glass also adds a practical advantage to the device by doubling up as a built-in polarizing filter for the camera, which allows it to produce clear and sharp images.

Talking in specifics, the company says that even though electrochromic glass has been commercially used before, its R&D team had to pull off some extraordinary work to miniaturize the technology for its use in a smartphone. The glass panels on the Concept One sit at just 0.1mm and it takes the device a mere 0.7s for the glass to transition from solid black to fully clear.

What are your thoughts on the OnePlus Concept One? Let us know in the comments below.

Was this article helpful?
YesNo
TechPP is supported by our audience. We may earn affiliate commissions from buying links on this site.
Read Next
How to Pixelate or Blur Content on an Image on OnePlus Phones
#CES 2020 #oneplus #OnePlus Concept One