After being globally unveiled earlier this month, Samsung has today announced a new smartphone, the Galaxy Note 10 Lite, in India. Essentially, the phone is a slightly run-down version of Note 10 launched last year at a relatively low price, with the key USP being the intelligent S-Pen. That said, let’s jump in and look at the device in detail. 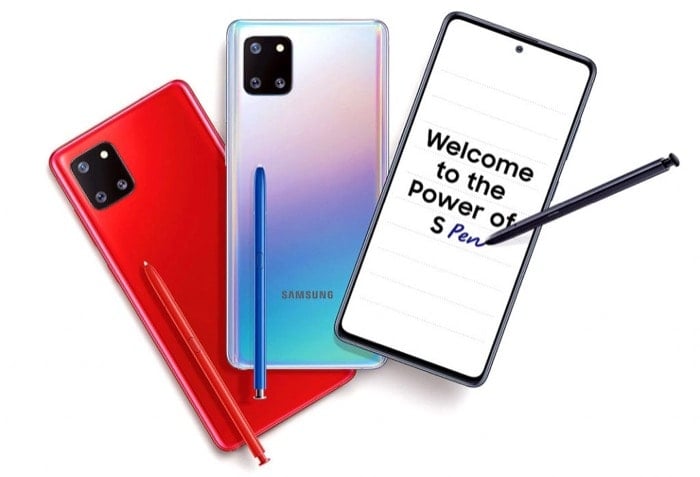 In terms of design, the Note 10 Lite features a glossy plastic back design with a rectangular camera module for the rear cameras. Towards the front, it flaunts a 6.7-inch Full HD+ Infinity-O display with a hole-punch cutout to house the front-facing camera. The Note 10 Lite comes in three color options: Aura Black, Aura Glow, and Aura Red.

At its core, the Note 10 Lite is powered by the Exynos 9810 octa-core processor with Mali-G72 GPU, coupled with 6GB or 8GB of RAM and 128GB of internal storage, expandable up to 1TB with microSD card. It includes a 4500mAh battery with 25W super-fast wired charging and runs on OneUI 2.0 based on Android 10 out of the box. Among other things, the device comes with the signature S-Pen with Bluetooth Low-Energy support found on Note series devices and has an in-display fingerprint scanner for authentication, along with USB Type-C, Bluetooth 5, USB 3.1, and NFC. What’s interesting with the S-Pen is its ability to instantly convert handwritten notes to digital text, making it easier to share.

The Samsung Galaxy Note 10 Lite comes in two configurations: 6GB + 128GB and 8GB + 128GB, priced at Rs 38,999 and Rs 40,999 respectively. It is up for pre-order and will go on sale starting February 3 across various retail stores, online stores, and Samsung.com. Besides, Samsung is offering an Upgrade Offer of up to Rs 5000 to its consumers, which effectively brings down the price of the device to Rs 33,999.