When it comes to Android flagships, the Samsung Galaxy S series has a special place. It has been the pacesetter for premium Android devices for a while now, be it in terms of making AMOLED displays the rage, pumping up processor GHz and cores or adding a whole new dimension to photography. The latest S20 series, therefore, has a lot to live up to. It comes in three variants, starting with the S20 and going up to the S20 Ultra. It is the variant in the middle, the S20+ that we are going to be looking at. 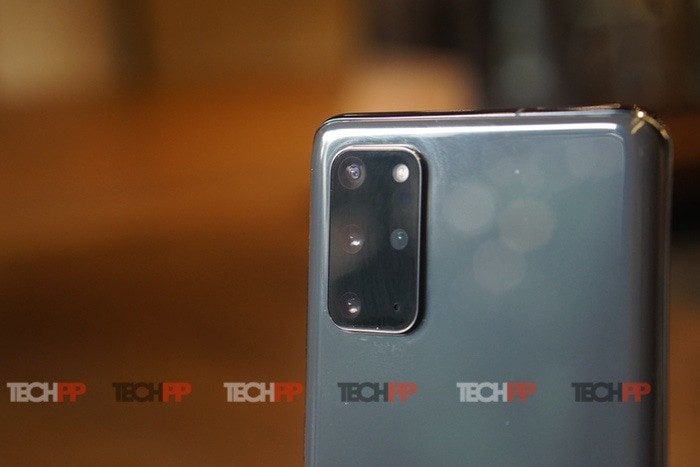 The S20+ is pretty much a slightly larger version of the, well, Galaxy S20. And Samsung’s latest Galaxy S flagships are definitely very good looking, although they do not stand out from their other siblings as prominently as the S10 and S9 series had, thanks mainly to that rectangular camera unit at the back which is becoming a bit of a Samsung design signature. It does detract to an extent from the premium feel of the phone.

But that teeny design niggle apart, there is no doubt that the Galaxy S20+ looks every bit a premium Android flagship. It’s front is all about a 6.7-inch Dynamic AMOLED display with a quad HD resolution (3200 x 1440), with a punch hole notch in the top center (what Samsung calls an Infinity O display), and now it comes with a 120 Hz refresh rate as well. In best Samsung flagship display tradition, the one on the S20+ looks eye-poppingly good, very bright and full of colors. 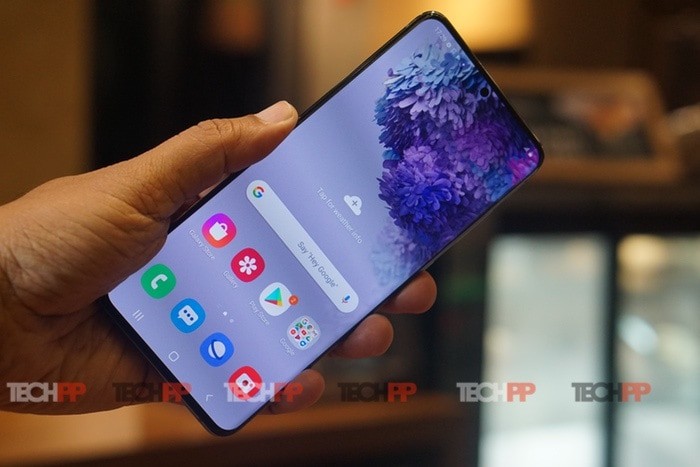 The back is glass too – incidentally, both front and back are Corning Gorilla Glass 6 – with an aluminum frame in the middle. We got the Cosmic Gray version of the device (there are Cosmic Black and Cosmic Blue options too) and the back had a very distinct shade of grey, looking almost slate-like. It is not designed to catch the eye but those that do see it, will not look away because it has a certain understated elegance about it. The camera unit, as we said, is rectangular and contains four cameras, a flash and a hole for a mic. It juts out and has a metallic ring around it. The SIM card slot is on the top, the volume and power buttons on the right, while the base houses a speaker grille and a USB Type-C port. The left side is totally plain – no Bixby button this time.

At 161.9 mm, the S20+ is definitely on the taller side, but it is impressively slim at a mere 7.8 mm, and at 188 grams, not as heavy as its size would seem to imply. All in all, the S20+ does not scream “premium,” but just states it in a normal tone. We do wish Samsung would do a little more in terms of design with its devices (especially THAT camera unit) but there’s no denying that the S20+ is a good looking phone. And because it comes with an IP68 rating, it has dust and water resistance too.

The S20+ might not be right on top of the design charts, but when it comes to hardware, it shoots right to the top. Yes, there will be those who will complain about Samsung using an Exynos 990 chip rather than a Qualcomm Snapdragon 865 in the Indian edition, but our experience with Exynos has been very good in the past so we are not complaining. That chip is backed up by a massive 12 GB of RAM and 128 GB of storage, which can be expanded to 1 TB. There is no 3.5 mm audio jack, but there are dual stereo speakers, and from what we have heard so far, they are very good indeed. 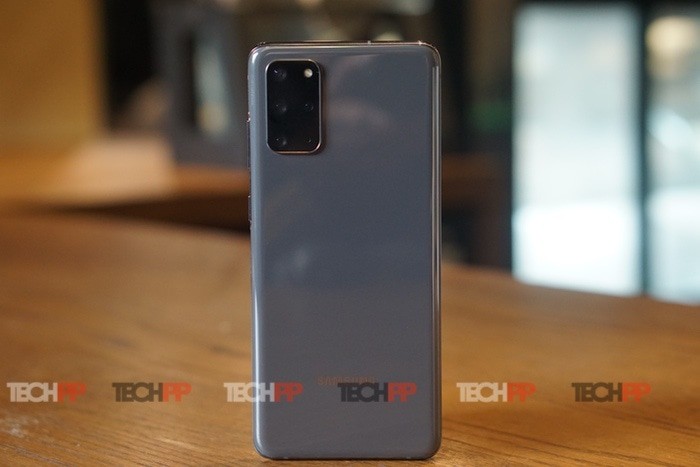 There is support for 8K video as well as the option of pulling out a 33-megapixel shot from a video if you so wish (8K Video Snap). There are a truckload of software and AI tweaks out there, including letting the phone decide the best editing and presentation options based on a 3-10 second video clip (Single Take). There is a 10-megapixel camera in front as well with a number of shooting options. Samsung has highlighted the cameras of the device, and we are expecting the world, which can be a good and bad thing.

The phone runs on Samsung’s One UI interface on top of Android 10. The interface is a huge step forward for Samsung, although it does have some rough corners. And topping off the spec goodness is a massive 4500 mAh battery, and comes with a 25W fast charger that should top it off in a little more than an hour.

The middle one, but still premium 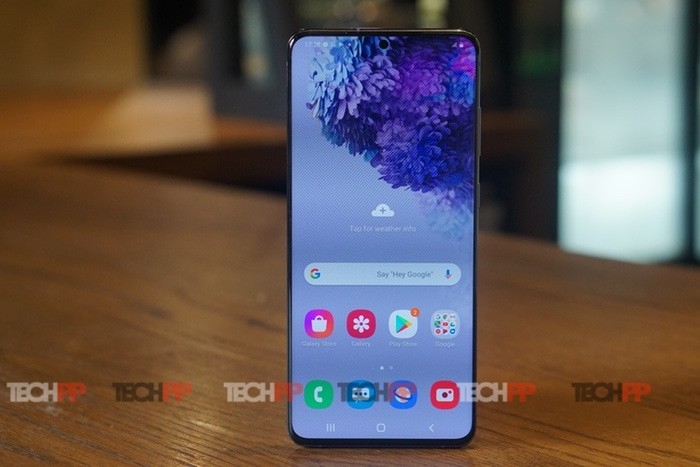 All this for Rs 73,999. Premium? You bet. But hey, this is a Galaxy S device. It is a bit bigger than the S20, a bit smaller than the S20 Ultra. A little more expensive than the S20, and a little less expensive than the S20 Ultra. The Galaxy S20+ might be the phone in the middle of the Galaxy S20 series, but ifs specs – and the history of the series – is anything to go by, its performance is going to be anything but “middling.” How will it fare against competition that is increasing;y playing the “comparable specs at a much lower price” card? We will let you know in our review.

Was this article helpful?
YesNo
TechPP is supported by our audience. We may earn affiliate commissions from buying links on this site.
Read Next
MIUI’s Erase Object vs Pixel’s Magic Eraser and Samsung’s O...
#First Cut #First Impressions #hands on #samsung #Samsung Galaxy S20 Plus