Realme 6 Review: Profusely Pro in all but name

The Realme 5 Pro gets a great successor

After releasing an extremely powerful device, the Realme X50 Pro (review), less than a month ago, Realme has now decided to shift focus to its most popular smartphone series, the “number series.” The smartphones under this line up come with a mid-range price tag paired with comparatively high-end specs. And to this series, Realme has added the Realme 6, which may sound like the successor of the Realme 5 (review), but actually comes as the successor of Realme 5 Pro (review). The same reflects in the pricing and the specs of the device. But can it prove its mettle in performance as well? 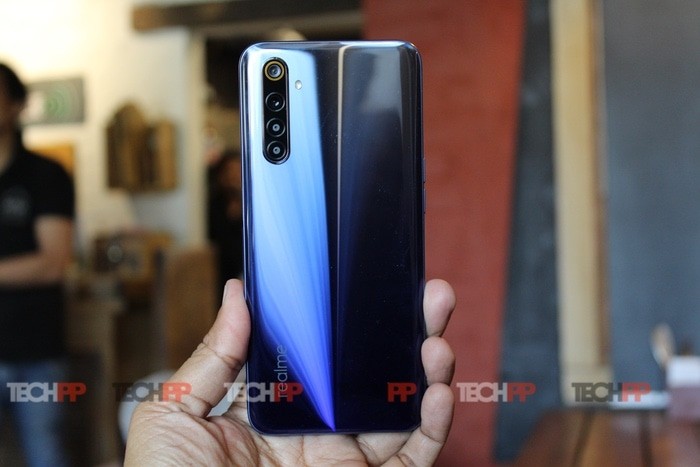 The Realme 6 ticks all the design boxes a smartphone in this price range is expected to tick. The smartphone comes with a tall, punch hole display, surrounded by thin bezels on three sides and a slightly thicker chin. A glass-like plastic back with color gradient and light patterns and a long capsule-shaped camera unit. The design of the Realme 6 is pretty routine apart from the power/lock button placed on the right side of the phone. Sounds typical? Well, actually the power/lock button doubles up as a physical fingerprint scanner which is definitely a plus in both design and functionality book for us.

The phone may follow a mainstream design blueprint but it still looks good. The plastic back does attract a lot of fingerprints and smudges and does not feel very sturdy but the phone is very modern when it comes to looks and fits right into the image of what a smartphone in this range should look like. For more details on the design, read our first cut.

Gaming, multitasking, can handle it all

The Realme 6 is powered by Mediatek Helio G90T processor (the same which we saw in the Redmi Note 8 Pro) which is paired with 8GB RAM and 128 GB storage. The phone is also available in 4 GB/ 64 GB and 6 GB/ 128 GB variants. The storage can be expanded by using a microSD card slot for which there is a dedicated slot.

These impressive numbers do translate into great performance. The phone glided through our day to day tasks. From messaging to web browsing to general social media scrolls, the device handled everything with ease. We could easily jump from one app to another and the phone did not stutter or lag even when there were a number of apps running in the background. 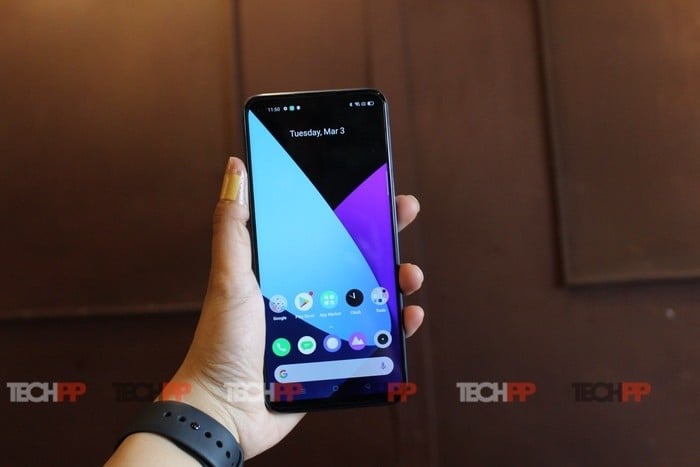 We have seen the Mediatek Helio G90T handle gaming very ably on the Redmi Note 8 Pro and we were expecting a fair bit from it on the Realme 6 as well. Well, we were not disappointed. The processor handled both casual and heavy-duty games with ease. We tried casual games like Alto’s Odyssey, Hang Line on the device and the experience was a delight. We also played PUBG Mobile on the phone on high settings and did not experience any lags or crashes. The phone did get slightly warm after a while but the temperature never reached an alarming level.

The 6.5-inch full HD+ display of the Realme 6 with a 90 Hz refresh rate played a major role in making the phone feel smooth and snappy. It is a sufficiently big display and bright enough to be used easily on a sunny day. The phone also has a decent loudspeaker. The fingerprint scanner on the frame is pretty quick to respond and because it is the power/lock button, it was pretty natural for our thumb to reach for it. We also used face unlock to unlock the device which again was super quick and accurate. 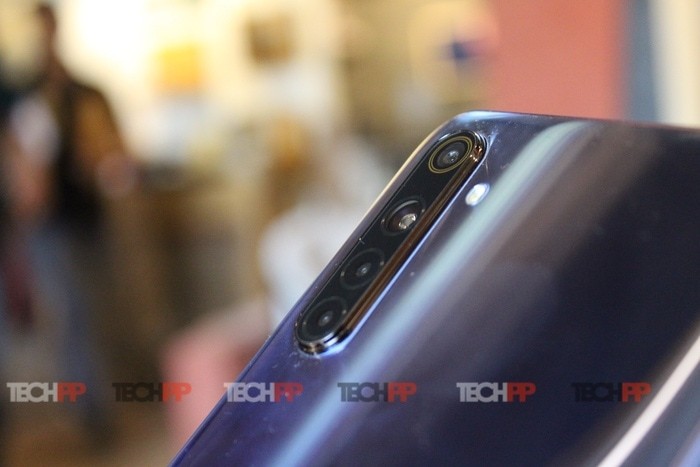 The camera turns in a good performance in well-lit environments. Most of our broad daylight shots had ample amount of detail, and even after zooming in our shots did not get too grainy. The phone takes 16 megapixels shots by default, although there is also a 64-megapixel shooting mode, where you can get much more detail. The camera is very quick to focus and AI scene detection is very swift in recognizing the subject the camera is shooting. While the ultrawide mode and the portrait mode on the camera are quite impressive, the macro mode was a bit of a let down as we found ourselves often struggling to get the subject in focus. The reproduction of colors also seemed a little off. In daylight conditions, the camera showed a tendency to oversaturate colors. It did make the photo pop but it did not reflect the subject’s true colors. 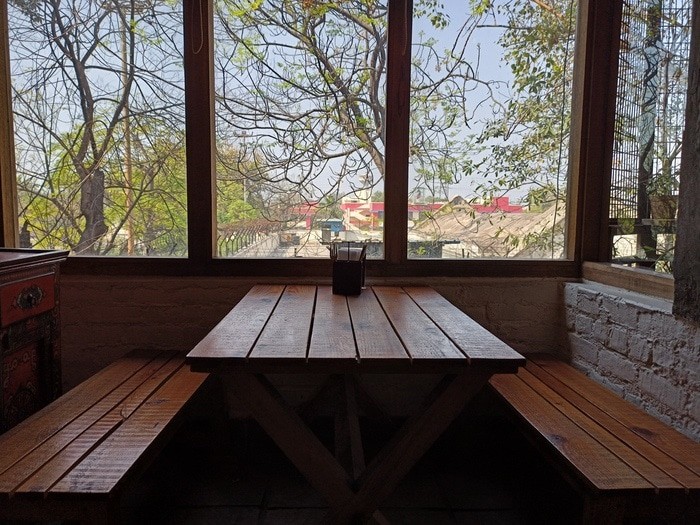 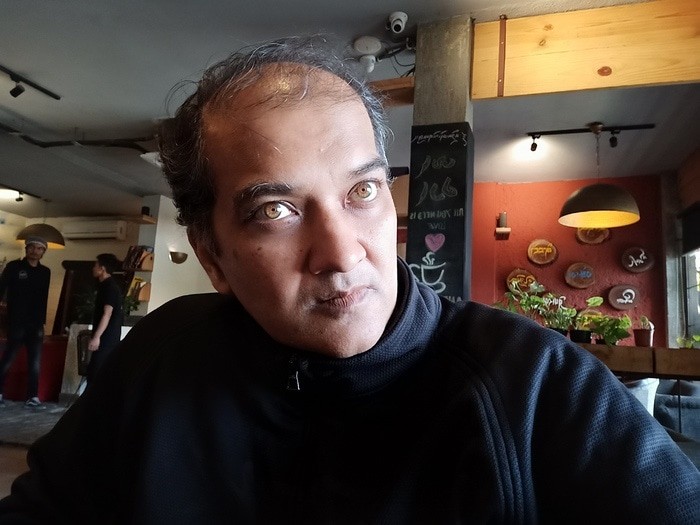 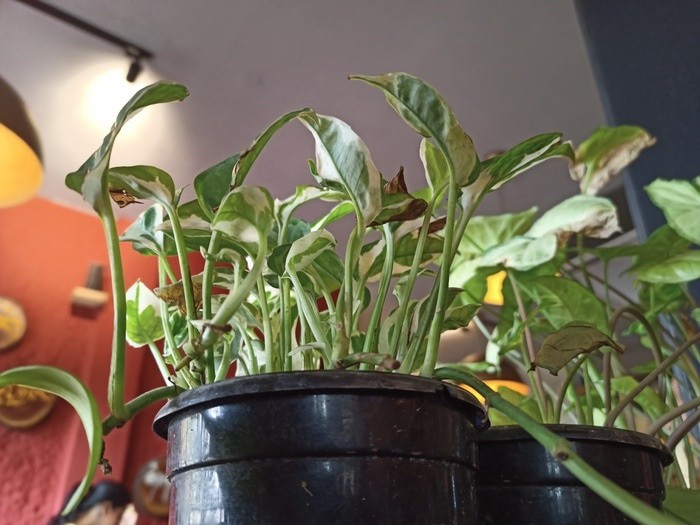 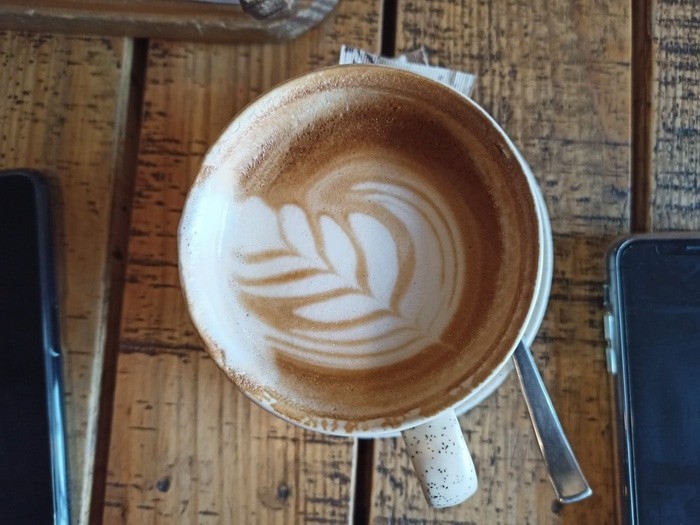 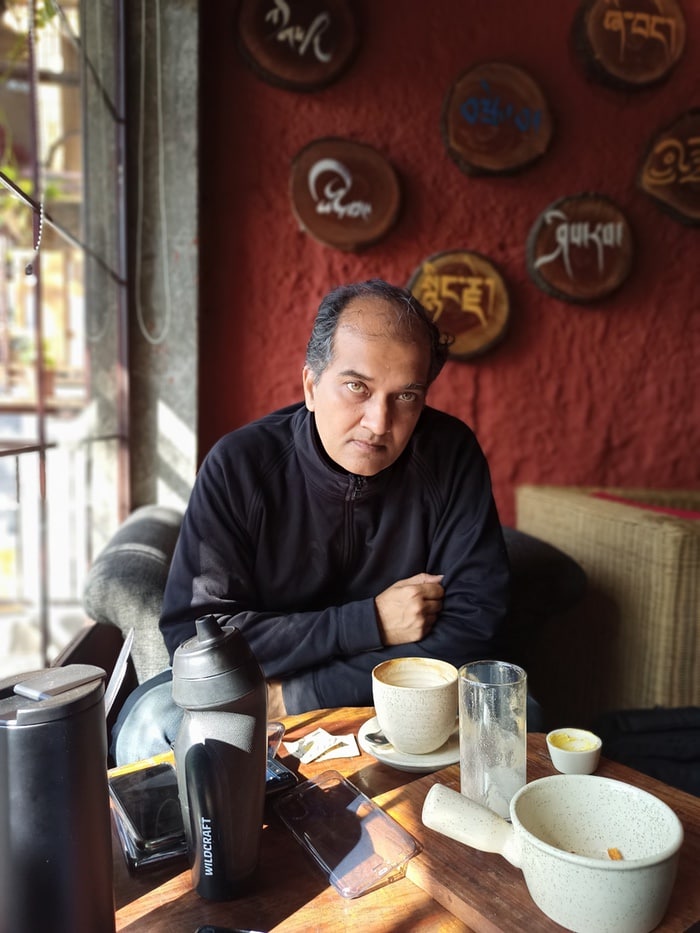 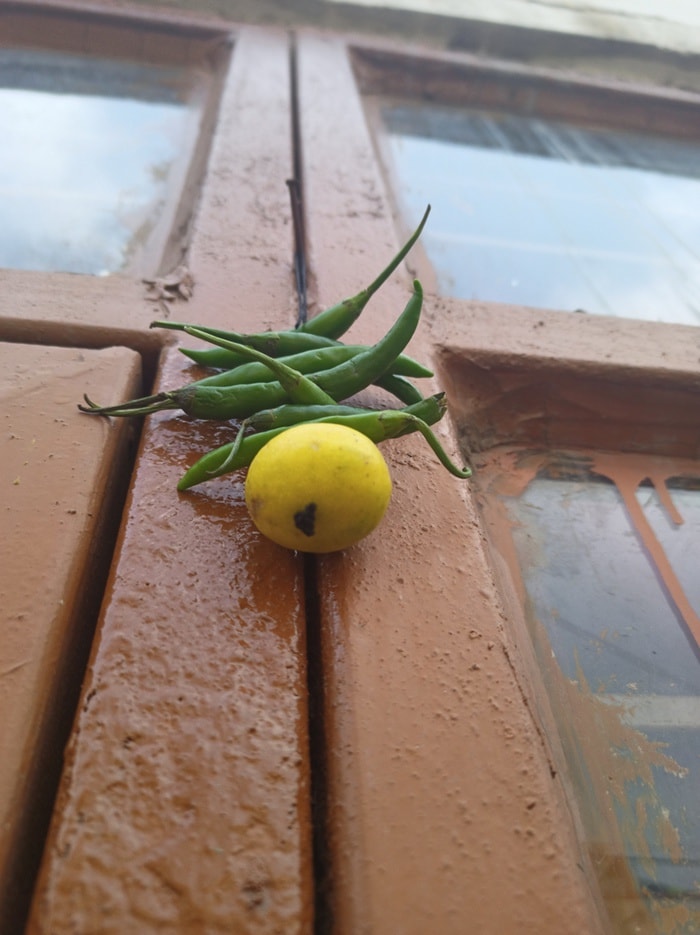 Matters, however, went downhill as the lights dimmed. Pictures turned out to be hazy and grainy in low light conditions. The night mode on the phone does make a difference here, adding details to night time photographs, and often delivering good shots.

On the front, the phone has a 16-megapixel shooter with an f/2.0 aperture. Just like its brother on the back, the Realme 6’s front camera takes good selfies in well-lit conditions. The phone comes with beauty mode on by default which you can turn off if you want more realistic looking selfies. Stick to well-lit environs, and you will not be disappointed by yourself(ies).

A Real-ly uncomplicated, yet rich, UI

The Realme 6 comes with Android 10 out of the box with a layer of the new Realme UI. The UI is easy to use and uncomplicated but still comes loaded with a number of features. It has a number pre-installed third-party apps, most of which are useful like Facebook, Amazon, Gaana but if you like your phone clean, this might get on your nerves a little because along with third-party apps, the phone also has a number Realme’s own apps. It also offers features like Reading mode, Realme Dual Mode audio (that allows you to connect a wired and a wireless earphone to your phone at the same time), and Dark mode all of which are pretty handy. 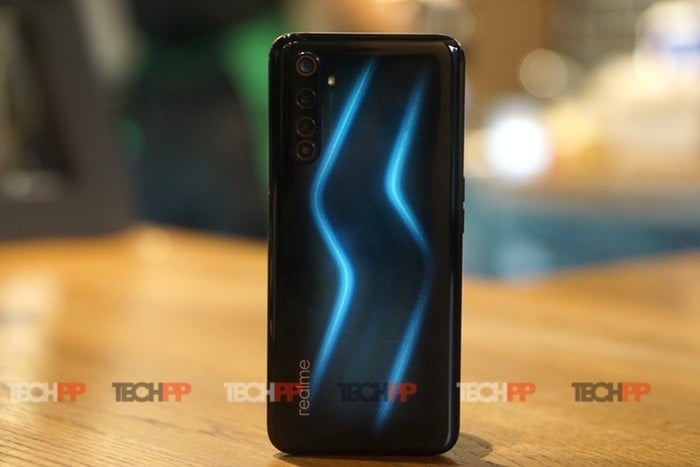 Realme 6 Pro Review: Do not go by the name, this has the X factor!
Read More

The UI is not overwhelming at first sight but can be a little too much at times when you start looking at different features, not all of which are immediately evident. And well, then there are the ads, although turning them off is as easy as making a small trip to Settings.

The Realme 6 comes with a large 4,300 mAh battery and with a 30W Flash Charger in the box – it is incidentally, the first “non-Pro” in the number series to come with a USB Type C port. The phone easily survived for more than a day under heavy usage on a single charge and lasted for about a day and a half when we used it just for mainstream tasks. With support for Flash Charge, Realme claims the phone can be completely charged from 0 to 100 in about an hour. It did get up to 60 percent charged in just about half an hour and took just slightly more than an hour to hit the 100 percent mark. That is pretty awesome at its price point. Which of course takes us to the matter of price. 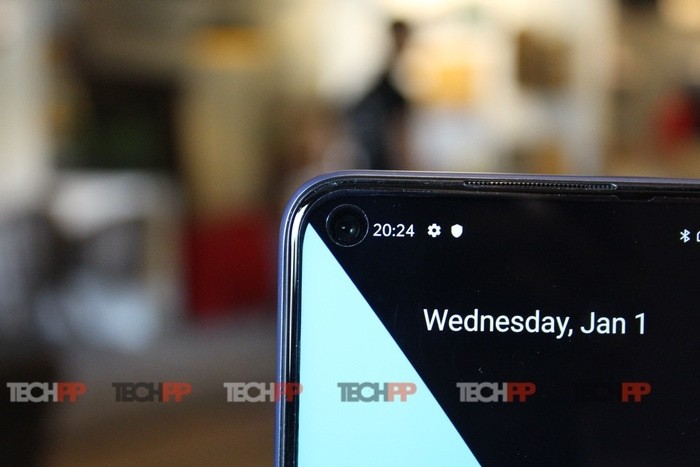 Realme 6 comes with a starting price of Rs. 12,999 for the base 4 GB/ 64 GB variant. The 6 GB / 128 GB variant is priced at Rs 14,999 and the top 8 GB/ 128 GB one will set you back by Rs 15,999. These might seem slightly high for a non-pro number variant in the series (they have started under Rs 10,000) but the Realme 6 is definitely a Pro, both in specs and performance. The phone does really well in the gaming, general performance, and battery departments. Yes, the phone faces a lot of heat from the likes of Xiaomi Redmi Note 8 Pro, Samsung Galaxy M31, and even its own sibling Realme X2 and perhaps even its Pro brother, which starts at Rs 16,999 – and well, Xiaomi also has Redmi Note 9 just around the corner which is likely to come under the same price range. Still, the Realme 6 does have the metal (or plastic, in this case) to stand on its own. It is definitely a Pro, just not in name.

Realme 6 First Impressions: Pro in price, Pro in specs, just…
Realme 6 Pro Review: Do not go by the name, this has the X…
Realme Watch S Pro Review: A promising pro...but watch out…
Realme Buds Air 2 Review: Really good sound, but with a…
Lenovo IdeaPad Slim 5i Review: Slim in its Name, Strong at…
Realme X7 Pro Review: Very Good Indeed, But No X Factor