Despite all the controversy surrounding Huawei and the lack of GMS support on any of their newer phones, there’s no denying that Huawei has been at the pinnacle of smartphone photography with all the crazy innovations. Be it the periscopic zoom on the P30 Pro or the cinematic cameras on the Mate 30 Pro, Huawei’s partnership with Leica has done wonders. Well, the latest P series smartphones from Huawei are right around the corner and just as with every modern to-be-launched smartphone, specs of the phone have already surfaced online, thanks to famous tipster Ishan Agarwal on Twitter.

The Huawei P40 Pro is the higher-end variant of the two, which is, of course, evident with the Pro moniker. However, there’s even a Huawei P40 Pro+ that’s expected to come out but there’s not much about that phone yet, so let’s take a look at the P40 Pro for now.

The Huawei P40 Pro will be powered by the Kirin 990 5G chip and will sport a 6.58-inch Full HD+ display. Though there’s no confirmation yet, the display is expected to sport a higher refresh rate which seems to be the norm for flagships in 2020. The display will have a dual punch-hole cutout with a primary 32MP shooter accompanied by a depth sensor. On the rear, the P40 Pro will have four cameras – 50MP+40MP+12MP+TOF along with Huawei’s XD Fusion Engine. One of these lenses will be a periscopic zoom lens with the ability to zoom up to 50X with stabilization. There’s going to be a 4200mAh powering everything along with support for 40W wired charging and up to 27/40W wireless charging too which is phenomenal. 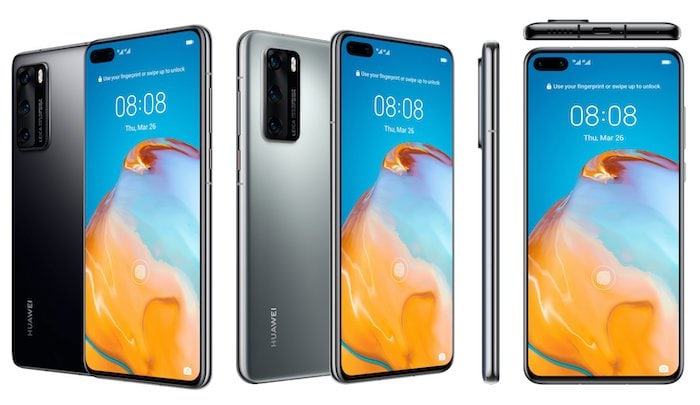 The Huawei P40, while retaining most of the core internals from its elder sibling settles for a smaller display and forgoes a camera from the back. There’s the same Kirin 990 SoC with 5G powering a 6.1-inch display having the same punch-hole cutout. The rear now has three cameras – 50MP+16MP+8MP and only has up to 30X digital zoom. The battery capacity is also slightly reduced to 3800mAh.

Both the P40 and P40 Pro smartphones will ship with Huawei’s own suite of apps and an app store that does not use GMS. There’s no word as to if and when the P40 series will come to India, but given that the Mate 30 series did not, chances are rather slim. Detailed specifications of the phone will come to light on March 26 when the phone is officially set to be announced.

TechPP is supported by our audience. We may earn affiliate commissions from buying links on this site.
Read Next
Huawei FreeBuds 4i Review: A Well-Rounded ANC Performer for Its Price
#Huawei #Huawei P40 #Huawei P40 Pro