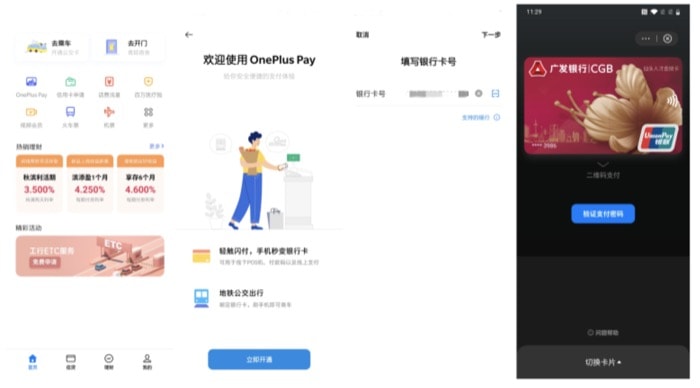 Unlike other countries, where OnePlus smartphones run on OxygenOS, Chinese variants of the device rather have their own skin on top, called HydrogenOS. Essentially, it is a run-down version of OxygenOS, without the Google Play services. The NFC-based payment service, OnePlus Pay, resides within the Wallet app found on HydrogenOS and supports a handful of banking cards. Moreover, as already mentioned, the service is currently supported on OnePlus 7T and 7T Pro, and the company plans to add support for more devices and banks moving forward.

As per a post on OnePlus’ forum, it seems that the company has been testing the OnePlus Pay service for over half a year before it made its way to the OnePlus 7T series. The post also mentions that the company plans to add support for more OnePlus devices in the future. Going into specifics, OnePlus highlights how the service leverages NFC (Near-Field Communication) for payments, which is similar to how most payment solutions work. However, the company suggests that its payment solution is faster and more convenient than some of the other popular services like WeChat and AliPay, in China. And to make things simpler, the service also offers the option to make quick payments by double-pressing the power button to fire up the app and make a payment at the POS.

Based on the information available on the forum, it looks like OnePlus plans to increase support for more devices and banks in the future. In addition, since there are not a lot of apps and services that support OnePlus Pay at the moment, the company also plans to increase support for more services. However, as of now, OnePlus Pay is only available in China, and so far, the company has not revealed any details on its plans to introduce it to other countries. Besides, if and when the service goes official in other countries, it would be interesting to see how it fairs compared to the likes of some of the popular payment services like Apple Pay or Samsung Pay.

How to Take a Screenshot on a OnePlus Smartphone
Read Next
Source: OnePlus Forum

Amazon unveils its cloud-gaming service Luna along with the…
How to Setup Tap to Pay on Google Pay and Paytm
OnePlus unveils its 120Hz OLED HDR Display for OnePlus 8…
Microsoft unveils Surface Duo: a Foldable Phone running…
Realme unveils roadmap for release of Realme UI based on…
[Tech Ad-Ons] WFH - Apple unveils the chaos behind the calm