A few weeks back, Samsung announced the Galaxy M21 smartphone, which packs in a 6.4-inch display, has triple cameras on the rear, and runs on the Exynos 9611 chipset, with a massive 6000mAh battery. Adding to the lineup, the company has today silently unveiled a new device vis a listing on its UAE website. Dubbed the Galaxy M11, the smartphone is an entry-level model and appears to be a successor to the M10, announced last year. Let’s check out the device in detail. 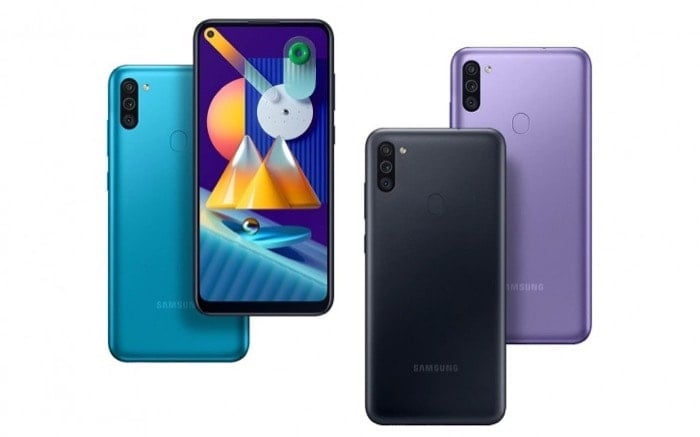 In terms of design, the M11 comes with an all-glass estate on the front with a narrow chin at the bottom. On the rear, it has a triple camera setup arranged in vertical alignment and a fingerprint scanner for authentication. Towards the front, the device has a 6.4-inch LCD (Infinity-O) display with an HD+ resolution and a hole-punch cutout to house the front-facing camera. The M11 comes in three color options: Metallic Blue and Violet, and Black.

Talking about performance, the Galaxy M11 is powered by an octa-core processor clocked at 1.8GHz. However, as of now, the company has not revealed the name of the chipset or any of its other details. Besides, there is 3GB / 4GB of RAM and 32GB / 64GB of onboard storage (expandable with microSD card). To power the internals, the device includes a 5000mAh battery that charges over USB Type-C and is likely to support 15W fast charging.

On the software front, the M11 runs on Samsung’s One UI 2.0 based on Android 10, out of the box. Among other things, it comes with support for Wi-Fi b/g/n and Bluetooth 4.2 for connectivity and offers a rear-mounted fingerprint sensor for authentication, along with a 3.5mm audio jack and USB Type-C port.

For optics, the Galaxy M11 sports a triple camera setup on the rear, with an LED flash. The setup includes a 13MP primary sensor with f/1.8 aperture, which is accompanied by a 5MP ultra-wide-angle lens with f/2.2 aperture and 115 -degree FoV, and a 2MP depth sensor with f/2.4 aperture. On the front, the device has an 8MP selfie shooter with an f/2.0 aperture, housed within the hole-punch cutout.

As of now, Samsung has not announced the pricing details for the Galaxy M11, nor has the company revealed the availability for the device. So stay tuned for further updates!

Was this article helpful?
YesNo
TechPP is supported by our audience. We may earn affiliate commissions from buying links on this site.
Read Next
How to Take a Screenshot on Samsung Galaxy Devices
#samsung #Samsung Galaxy M11